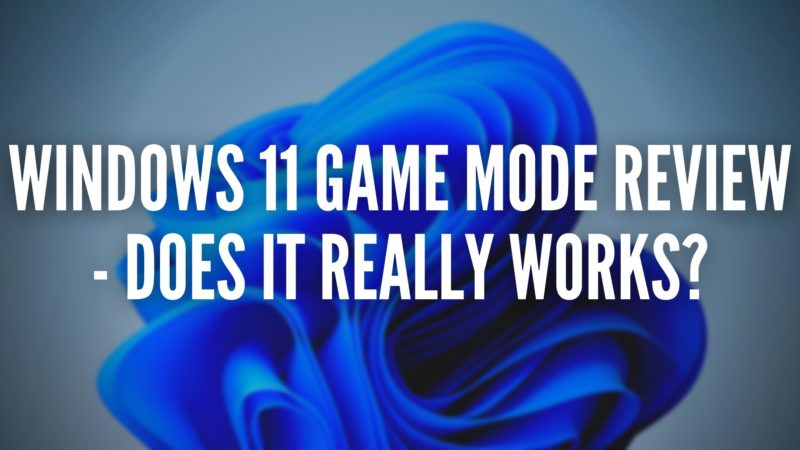 We tested out the windows 11 game mode that is made especially for PC gamers to boost fps to see whether it works.

Gaming on a PC platform is always a significant advantage for video games. While on the console platform, you can get 120fps maximum with the latest Generation consoles like the PS5 for example, you can get an average of 300fps for the same game if you play that on a PC, but that includes if you have a beefy system. With the customization of CPU, GPU, and RAM, you can enjoy more fps with both performance and quality. Also, you can add some graphics mods to enhance the game, which looks even better than the original graphics.

Microsoft has released a new feature with Windows 11 operating system to provide PC gamers with better game performance. It is called Game Mode. Windows 11 Game Mode can be used when you are playing games. From the statement of Microsoft, this mode disables all other unnecessary background apps and tasks. It also prevents other apps from interfering or getting into work while playing a game. By doing this, the game runs faster rather than in normal mode.

So without further delay, let’s check out the Windows 11 Game Mode Performance in Games and see if it works.

Here are the details of our system, which we have used for the Windows 11 Game Mode experiment.

Here are the details of the gaming benchmark we tested with Windows 11 Game mode turned on and off.

The test results show that this Windows 11 Game Mode makes almost no fps difference from PC games. Except in some games, there is only an FPS difference of 2-3 FPS, which is negligible for gamers as that makes no massive difference or improvement to the games.

So, in this case, turning on the feature Windows 11 Game Mode does not matter. Either this feature of Microsoft windows 11 is useless, or the company must work more to improve this feature.

So this was all about Windows 11 Game Mode Review. Don’t hesitate to comment below if you think we have left out something.

3 thoughts on “Windows 11 Game Mode Review – Does it Really Work?”