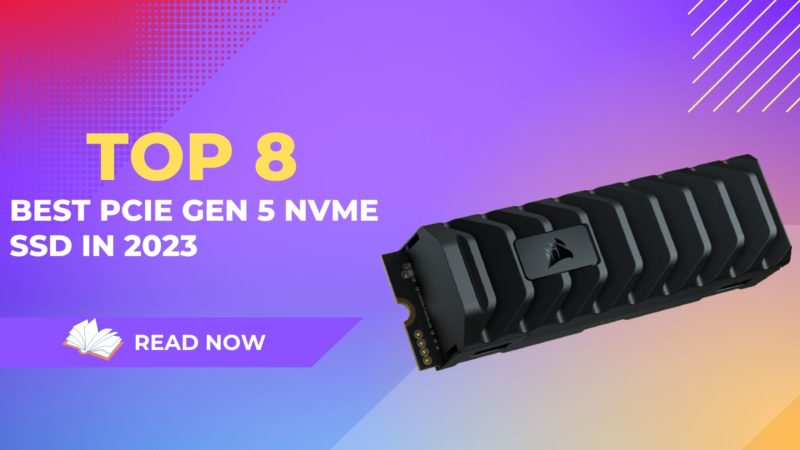 We have listed the top 8 best and the fastest Gen 5 NVMe SSD that you can buy in 2023 that can hit read speeds up to 14GB/s.

Recently all the Gen5-supported motherboards have been released along with Intel’s new 13th Generation Processors and AMD Ryzen 7000 Series Chips. The new Z790 and the X670 motherboards support the latest PCIe 5.0 SSD and provide ultra-fast speeds. The SSDs we have listed here are the best Gen 5 SSDs you can buy in 2023.

The performance of these SSDs varies from 10GB/s and goes all the way up to a whopping 16GB/s. The new Gen5 SSDs have been in production for a very long time now, and finally, this year, we will be available for current-generation PCs and Laptops.

But if you plan to build a PC, then Gen5 SSD is the best option to experience the fastest gaming and content creation computing speeds. And since there isn’t much clarity on the SSD models that you will be looking out for, we have listed the top 8 best PCIe 5.0 Gen NVMe SSDs for you to check out, research and make your decision.

These are the best Gen 5.0 SSD that you invest your money in 2023. These SSDs support both Intel 13th Generation and AMD 7000 Series Processors.

The first PCIe Gen5 SSD on our list is the Phison PS5026 Gen 5.0 NVMe SSD. This SSD was recently launched at CES 2023. This SSD will have a very high transfer speed of over 10GB/s while keeping the power requirements as minimum as possible. The brand says that this SSD will be coming in different storage sizes.

The Phison E26 is another Gen5 NVMe SSD capable of offering speeds of up to 16GB/s, making it one of the fastest Gen5 SSDs on the planet. The SSD will be built off a 12nm Process.

The Zadak/Apacer TWSG5 is a Gen5 NVMe SSD that comes with a PCIe Gen5 Interface in the form of an NVMe SSD. This SSD can be one of your best upgrades as it has sequential read and write speeds of up to 13GB/s and 12GB/s, respectively. It is an excellent addition to a Gaming PC, Content Creation PC or even a Workstation PC.

The SSD comes equipped with 176 Cell Layers of TLC NAND Flash memory and uses DRAM Memory to Operate. It will come in both 512GB and 1TB Storage Sizes.

The Gigabyte Aorus Gen5 10000 NVMe SSD comes with a PCI Express 5.0 x4 Interface and supports the all-new NVMe 2.0 technology. This SSD is based on the Phison E26 SSD that we discussed earlier. This SSD will ship with capacities like 1TB, 2TB and 4TB. It will have read speeds of 12GB/s and write speeds of 10GB/s/

This SSD comes with a massive aluminium dual-fin stack heatsink for the SSD. This is their all-new Aorus Xtreme Thermal Guard. This technology was earlier used on the Gigabyte’s Nehalem motherboards on the x58 north bridge.

Samsung will have their all-new 990 Pro PCIe Gen 5 NVMe in two different capacities, 1TB and 2TB. Their model numbers will be MZ-V9P1T0 and MZ-V9P2T0. The company also promised that both 4TB and 8TB models will be available soon. These SSDs will support all the latest generation Intel Core 13th Generation and AMD Ryzen 7000 Series Processors.

Corsair recently revealed their MP700 Gen5 NVMe SSD with a read-write speed of up to 10GB/s and 9.5GB/s, respectively. The new Corsair MP700 makes see of the latest NVMe 2.0 technologies to achieve unparalleled speeds, and it is fully compatible with the latest Intel 13th Generation and AMD Ryzen 7000 Series Processors. But you will need a PCIe Gen 5 Supported Motherboards to work. Compared to the last generation MP600, this SSD has almost 70% performance benefit.

Adata also released their latest version of the PCIe Gen 5 SSDs. These SSDs will have read speeds up to 14GB/s, and their Project Nighthawk and the Project Blackbird will have much higher read-write speeds. The other lower Adata Gen5 SSD models will have slower transfer speeds of up to 12GB/s or 10GB/s. Data will have heatsinks for their Gen5 SSDs to prevent thermal throttling.

The CFD Gaming NVMe Gen5 SSD is the best Gen 5 Gaming NVMe SSD you can buy. Their all-new SSDs are based on the NVMe 2.0 Specs, and because of its Gen5 Interface, this SSD will have speeds of 10GB/s Read Speed and 9.5GB/s Write Speed. This is a sub-brand of the Phison SSDs discussed earlier in this article.

These SSDs will have a heatsink on top of it so that the thermals are under control and it can perform at their maximum speeds without having to think about thermal throttling. This Gen5 Gaming SSD will use thermal paste rather than Thermal pads. These SSDs will come in 1TB, 2TB and 4TB storage sizes.

MSI released their Spatium M570 Series of Gen5 NVMe SSDs. There will be a Pro and regular version of this SSD; as the name suggests, the Pro Version is faster. This SSD will use the Phison’s latest M26 Controller and will have 232 Layer NAND Chips. Both the SSDs will have different heatsink designs.

The Pro version will feature a 12GB/s read speed with a 10GB/s write speed, while the non-Pro version will be limited to 10GB/s. These SSDs work flawlessly with the Intel 13th Generation Processor and the AMD Ryzen 7000 Series Processors.

So these were our Top 10 Picks for the best PCIe Gen 5 NVMe SSD you can buy. But if you think we have missed anything, let us know in the comments below.