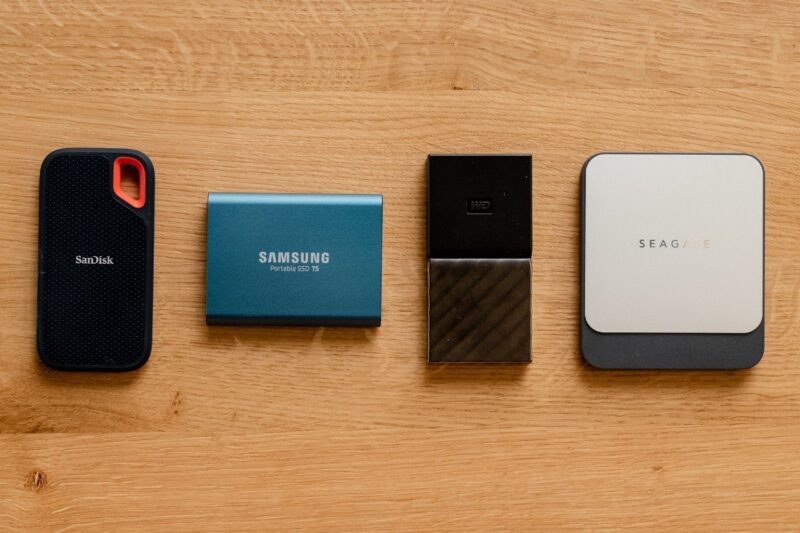 Type C connecter on an External SSD has become a norm as normal external hard disks are way slower than SSDs. SSDs have fewer chances of loss in Data because of RAID (Redundant Array of Independent Disks).

The world has seen a technological change in every aspect of technology that uses storage devices. If seen the older consoles didn’t ship with SSDs in them but now all consoles don’t matter if it’s handheld or a huge console like Playstation 5 or Xbox series X or a Nintendo or a Steam Deck all use the power of SSDs.

The factor that leads USB Type C as the best connector because it uses USB3.1 industry standard, the latest and fastest interface, 10Gbps also the fact there is no right way up. Both ends are the same and can be plugged in any way, without even looking at it.

Today we are gonna talk about the top 5 SSDs in the market for you to choose from and get a better experience out of your productivity. Let’s check it out.

Samsung is a company that has made some brilliant portable SSDs, and the Samsung Portable SSD T5 is our pick of the best portable SSD.

It builds on the brilliant design and performance of its predecessor, the Samsung T3 SSD (also on this best portable SSD list), but brings it up to date with an incredibly fast USB Type-C connection that ekes out every last drop of performance from the solid-state drive inside.

Well, the hard disk can actually do 2000MB/s but the problem remains with the ports that come in our desktop or laptop are of old Gen. To take full advantage of USB Gen 3.2 we need ports to lead this SSD to show its full power. The Read/write speed is usually 1024MB/s, which is sure fast but not for this SSD.

This is not the fastest USB Type-C SSD you can buy for gaming. But then, it’s far from the most expensive. Compared to the WD Black P50 Game Drive, the branding of the Seagate Barracuda Fast SSD 1TB looks like a bit of stretch. Rated at 540MB/s for reads and 500MB/s for writes, which is not as fast as present SSDs.

Then again, that fancy WD Drive with its NVMe SSD and USB 3.2 Gen 2×2 20Gbps interface costs roughly 75 percent more for the same 1TB of capacity. Moreover, a great deal of that increased performance isn’t available on most PCs and all consoles due to limited interface support.

If you’re looking for fast USB-powered external storage for games, this is currently as good as it gets. At least, it is in theory. The WD Black P50 Game Drive, tested here in 1TB format, and available in 500GB and 2TB flavors, is a rare breed of USB Type-C external SSD.

That’s because it supports the very fastest USB 3.2 Gen 2×2 20Gbps interface, which is why it’s capable of reading and writing speeds up to 2,000MB/s.Random access performance is reasonable rather than spectacular, with 22MB/s reads, and 40MB/s writes for the 4K QD1 metric.

There’s a reason why LaCie is among the few brands trusted by creators and digital nomads alike. The manufacturer has designed its hard and solid-state drives to be travel-friendly, making them rugged enough to survive most accidental drops, as well as being lightweight and shock-resistant.

That is, while it may not have that rugged build that Lacie’s storage drives are known for, it is still built for travel. It’s versatile too when it comes to connectivity – while it does have that USB-C connection that’s best for MacBooks and the Dell XPS line of laptops while it also allows USB 3.0 connectivity for the other laptops out there.

There are more storage drives than u can imagine but buying the best one or the one that will make things easier is an important decision to make. So, if you like it buy it.