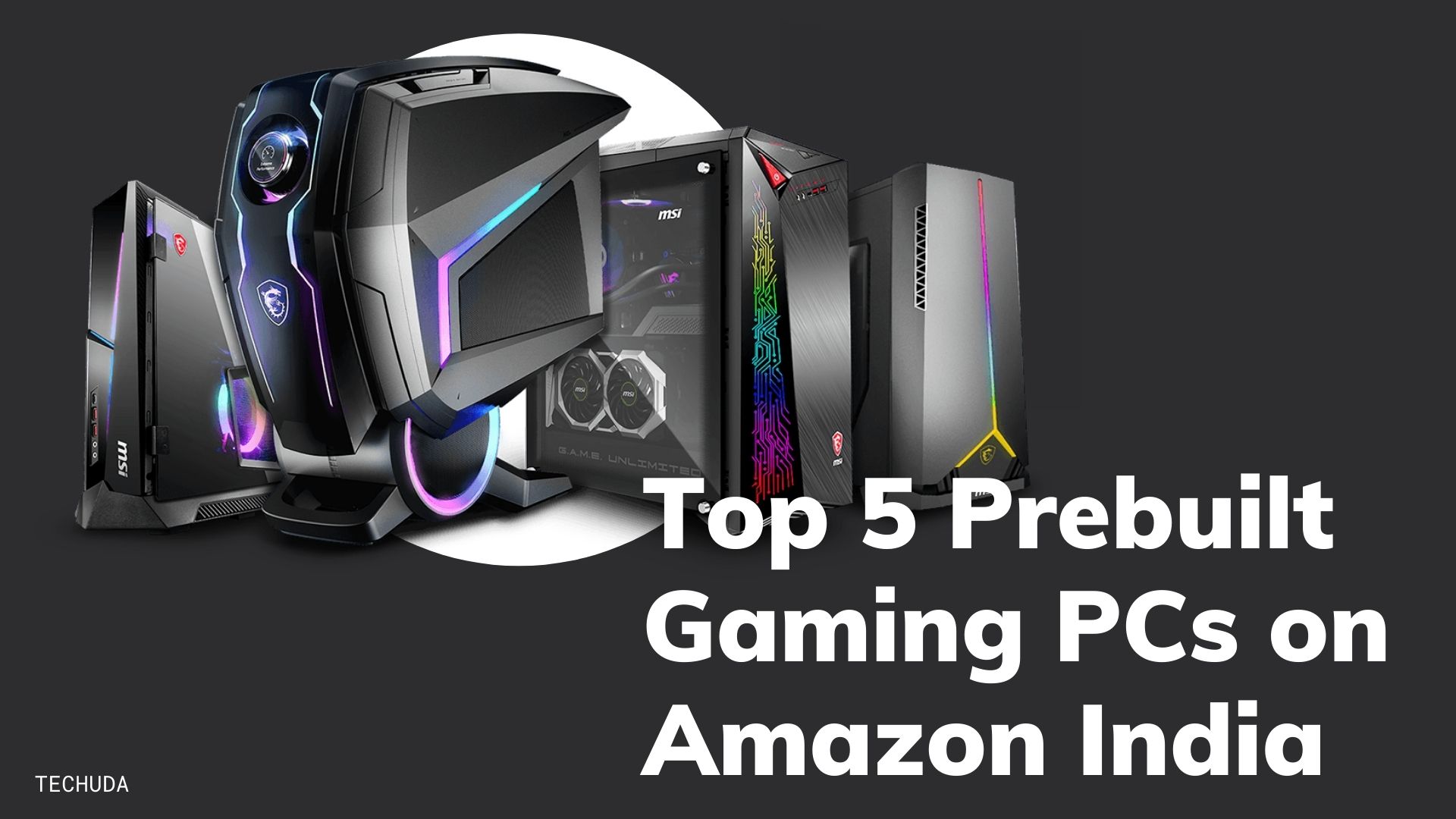 Prebuilt PCs and commercial Prebuilt Gaming PCs are widely popular for a long time now. Starting from Dell, HP, Lenovo, all the big brands are into prebuilt pc manufacturing. Mostly used in Office scenarios where space is a big limitation.
The main positives of using prebuilt PCs are that
– They take up less space compared to a traditional desktop.
– It doesn’t need any assembling and ready to use out of the box.
– Whenever there is an issue with the system, the manufacturer will take up the full responsibility of repairing/replacing the system.
And with positives there are negatives also
– Disassembling a prebuilt PC will void the Warranty.
– Upgrade can be an issue as there might or might not have enough space to put in new/bigger components.
– Not at all portable
Despite all the negatives, there is still a huge demand for Pre-built PCs nowadays. So today we will check out the Top 5 Pre-built Gaming PCs on Amazon India.

The Acer Nitro Prebuilt Gaming PC is powered by the Ryzen 5 2600. Ryzen 5 2600 is a very much capable processor for running games and other multithreaded software.

The 8GB DDR4 RAM is okay but might need an upgrade to the 16GB very soon. The GTX 1050Ti 4GB was a game-changer in the budget segment and to this day it’s one of the best value for money.

Yes, you can play games on this card with ease but streaming might be an issue. Since there aren’t any SSDs on this system, so windows booting or loading will take time. Adding an SSD will make the system more responsive.

Right now it’s pretty overpriced, you will be able to get it at much cheaper in the offline market.

This Pre-built Gaming PC from No Doubt is powered by the Intel Core i7 3770 Hexa core processor. Paired with 16GB of RAM and a GTX 1050Ti 4GB, this PC can handle games and video editing at ease.

The configuration is pretty old (3rd Gen CPU) but basic video editing and light gaming are very much possible on this system. The presence of a dedicated SSD will ensure that your system will be very responsive and loading and booting time will be very minimal.

Aesthetic-wise, the PC looks good with RGB fans and everything. This system can run games like PUBG, GTA V, Valorant, CS GO, FIFA, etc.
Again, if the online purchase is your thing go for it but if you want to assemble yourself you can check the offline local market.

The Gaming PC from Electrobot is powered by AMD Ryzen 4650G processor. This processor is not a CPU, it’s an APU. It is a Hexa core processor with 12 threads.

Now since this is an APU, it has AMD Radeon Vega 7 GPU cores built into the processor. Paired with 16GB 3200Mhz RAM and 240GB SSD, this system is good for playing basic games (because of dedicated GPU) and can be mainly used for editing and light rendering.

A 1TB Storage drive is provided for storing larger files. Apart from the dedicated GPU part, the performance is satisfactory.

The REO Gaming Desktop is powered by the Intel 3rd Gen CPU which runs at 3.1GHz. Paired with 16GB of RAM and a 120GB SSD, the system boots up very fast, and it’s very responsive.

Since this isn’t a Gaming Desktop, so there is no inclusion of a GTX graphics card. Instead, you will be getting a 2GB GT 1030 GPU which is fine enough for basic video editing and rendering tasks. Can run games at medium to low settings with good playable framerates.

Also has the WiFi feature in-built so you can connect your system wirelessly. Overall a good standard system for the price.

Get one of these for gaming – Xbox One Controller Review – Phantom Black Edition : Techuda

Another APU in the list. The Ryzen 3400G is a quad-core APU with both CPU and GPU capabilities. With a max boost clock of 4.2Ghz followed by 16GB 3000Mhz RAM, this system can run esports titles like CS:GO, Valorant, Overwatch with ease.

Having the system installed on the SSD, you will have ample space to install all your games on the 1 TB Hard drive. A very good value for money with all the latest components installed inside the Aero Cool RGB Case.

Pre-built systems are great. But as we mentioned before that there are certain drawbacks. You always don’t get the total bang for the buck PC when its pre-built.

But if you just want a system that you can bring home and start playing, then you can go for pre-built PCs.

A little bit of research over the internet and price comparing with the offline market will help you fetch a better PC with a better value for yourself.