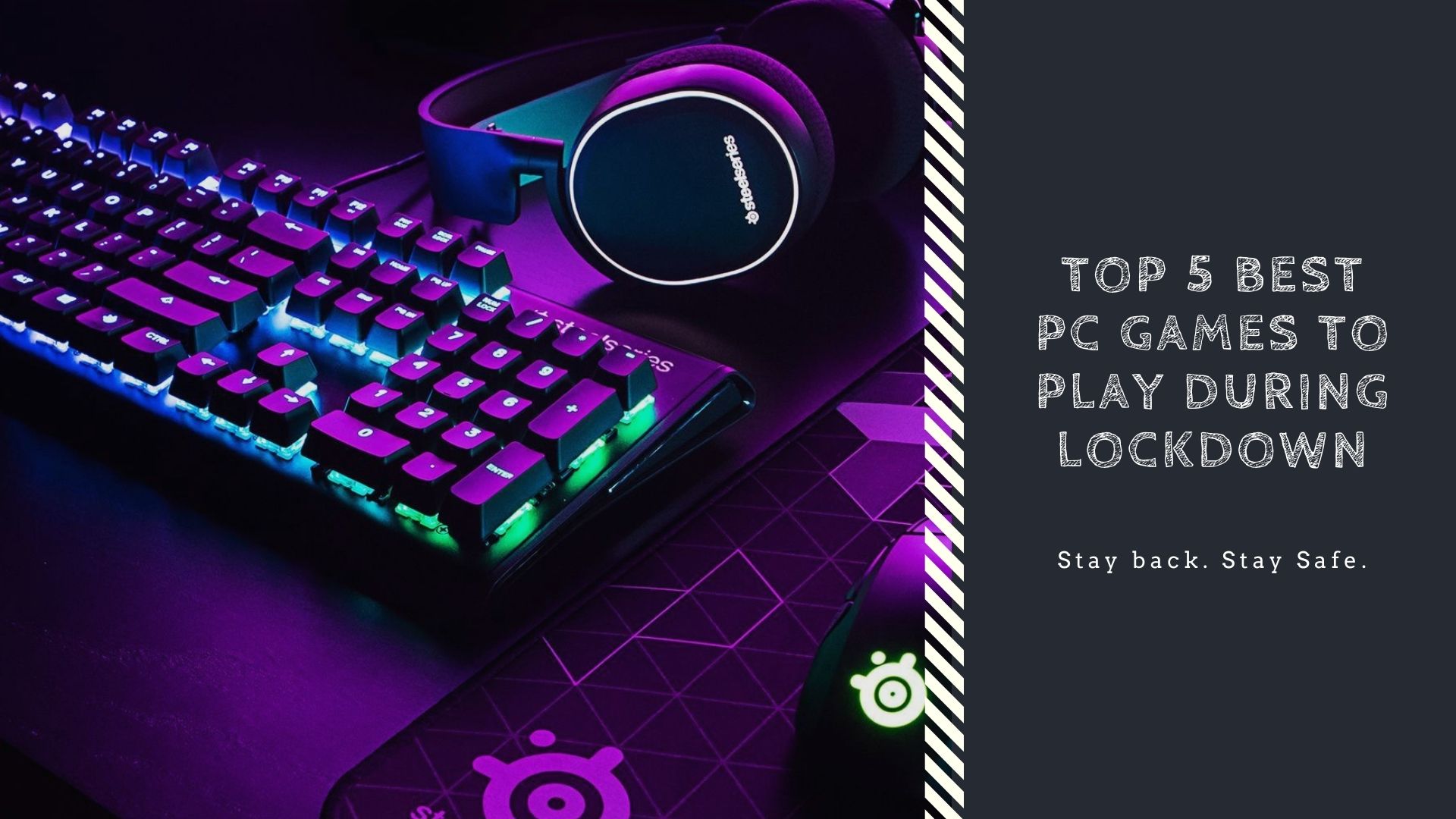 Getting bored staying back? Check out the top 5 PC Games to play when you are stuck at home in 2021.

Gaming is a widely popular sport for most of us now specially during this Coronavirus Pandemic last year, many non gamers actually shifted to gaming to kill time and boredom. This sudden rise of gamers impacted the Gaming community in a huge and positive way. Games are pretty much a getaway from real life. You can be something in the game that you cannot be in the real life. You can channelize out your frustration and stress on Games which impacts us in a good way. This year also we have seen a surge in the Coronavirus infection which forced the countries to go into a complete lockdown again. So I listed down the Top 5 PC Games that you can play when you are stuck at home during lockdown in 2021.

Grand Theft Auto 5 was developed by Rockstar Games and it came out in 2015 for PC. It is an open world third person action/adventure game. Although there is also a First person view, that the player can toggle and choose between the various camera modes. GTA V is one of those games that you will never be tired of playing. There will be two modes in the game, the Story mode and the Online Mode.

In the story mode, you will be able to play as three different characters, looting banks, killing enemies, driving and stealing vehicles etc., and the story revolves around that. In the Online mode you will be able a single individual doing various tasks, business battles, driving expensive cars, bikes and planes, play missons, jobs and alot of other activities that you can do in GTA Online. All these are possible because of the constant and regular updates and new content from Rockstar developers.

Overall, the most addictive and time killing AAA titles of all time. Still its one of the best video games that Rockstar ever made.

Assassins Creed Valhalla was developed by Ubisoft games and was launched last year in 2020. This game is a successor of the very popular Assassins Creed Odyssey. The story revolves around the Vikings intrusion in the Britain in 872-878AD. The player will control Eivor, the main protagonist and a Viking raider who will becomes involved in the fight and conflict between the Assassins brotherhood and the Templars.

This is an open world game which beautiful graphics, good combat mechanism with a variety of customization options available. This game has been nominated the Game awards for Best Action/Adventure game of 2020. This is one of the most popular Assassins creed Video games of all time.

Biomutant is a an action role playing third person shooter video game published by THQ Nordic recently in 2021. The players will be able to take control of a Mammalian fighter to battle the map filled with mutated animals. Players can customize their character in terms of body shape, fur thickness, fangs etc. Weapons can upgraded and created by collecting in-game items and resources.

The combat system mainly puts emphasis on the melee and long range shooting aspects. Over the game you can customize your abillity to attach wings legs and other bio mechanical body parts to fight more high level enemies. The game received special appreciation for the detailing and the graphics, environment and the gameplay!

Resident Evil village is a survival horror game developed by Capcom. In this game the players control the main protagonist of the game, Ethan Winters, who is in search for her daughter who has been kidnapped. After an sad encounter with Chris Redfield, a playable character in the Resident Evil Biohazard, he finds himself in a mysterious snowy European Village which is filled with mutated characters.

Lady Alcina Dimitrescu, a tall vampiric aristocrat lives in the nearby castle with her three daughters and mutated attendants. The players will be able to buy supplies, weapons and items from Duke,the merchant. The players will also be able to hunt animals and the Duke will cook those dishes. Eating side dishes will help in decreasing damage while blocking and other advantages. The game will also include an Online multiplayer mode.

This is a sequel to the Resident Evil 7 Biohazard.

Valorant is a first person Free-to-play shooter game developed by Riot Games under the code name Project A, released on 2nd of June 2020. The game is set in the near future. The players can take control of a set of agents which has its own powers and special abilities. The players have to either attack or defend a team of 5 players. Different agents have their different style of playing abilities. Right now there are 15 agents for you to choose from. The game has a wide variety of weapons starting from submachine guns, machine guns, assault rifles, pistols and sniper rifles. You can play various game modes like, Spike Rush, Unranked, Competitive, Death Match, Escalation etc.

Valorant is one of most played and most popular E-sports title now.
Download Valorant here

So these were our picks of the top 5 PC Games for you while you stay back home.