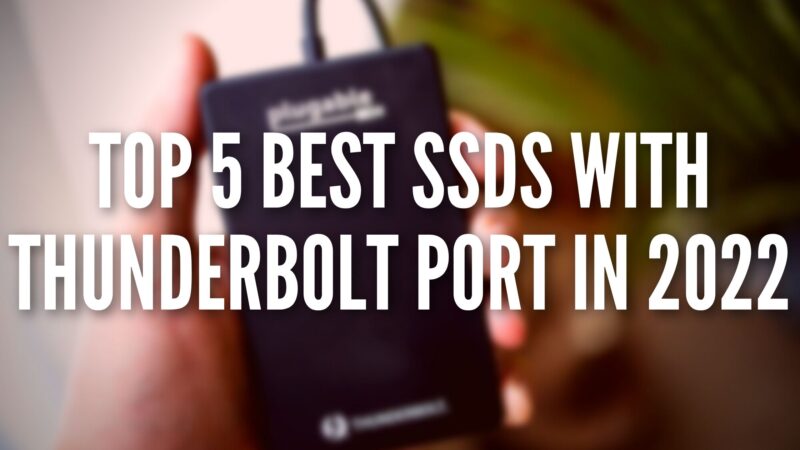 External SSDs with Type C Ports are fast and pretty much get all the work done for people who are into content creation but the performance of external SSDs with a thunderbolt port makes a lot of difference when it comes to speed and stability.

The world is getting faster day by day and everybody wants much faster technology to get their daily life going at a faster pace. Research and development have taken a huge leap on portable storage devices.

The read and write speed has well gone better as of now with the speed of a Thunderbolt SSD being approximately 700-800 MB/s on average and that speed matters to people as it gets things done faster and saves time.

So today we are going to take a look at the top 5 best external SSDs with a thunderbolt port. Also, don’t forget to check out the Bonus Thunderbolt 4 SSD External Hard Drive at the end of the article.

The first SSD on our top 5 External SSDs with Thunderbolt port is the LaCie Rugged SSD Pro.

The LaCie Rugged SSD Pro is fast, featuring a Seagate FireCuda NVMe SSD with up to 2800MB/s in transfer speeds. It also has IP67 dust and water resistance, features three-meter drop protection, and is capable of withstanding up to two tons of weight.

The LaCie rugged pro comes in black color rather than orange because the black edition has all the perks and features. It comes in 1TB and 2TB and 5TB configurations.

The second SSD on our top 5 External SSDs with Thunderbolt port is the Samsung X5 Portable SSD.

If you want speed above all else, and money is no object, then the Samsung X5 Portable SSD is the best portable SSD for you. It comes with a Thunderbolt 3 connection that takes full advantage of the super-fast speeds Samsung 970 Evo that comes inside.

However, that pure dedication to speed comes at some expense. First, there’s the financial expense, as this is a pricey external SSD. However, when it comes to performance, the Samsung X5 Portable SSD is the portable SSD to go for.

The Plugable Thunderbolt 3 NVMe External SSD is a solid-state drive that offers one terabyte or two terabytes of external storage is for the content creators who work with large files or wants things exported fast for that it has Thunderbolt 3, which in theory can deliver 40 gigabits per second – about 5 gigabytes per second in total across an entire chain of devices.

Coming in at 6.1 ounces the Plugable Thunderbolt 3 NVMe External SSD is about the weight of 2.1 pounds, with a surface area only slightly larger than a smartphone. Its aluminum body acts as both a heat sink and as protection from accidental bumps and drops.

The fourth SSD on our top 5 External SSDs with Thunderbolt port is the LaCie D2 Thunderbolt 3 Drive.

LaCie is also releasing the d2 Thunderbolt 3, a desktop external hard drive that is designed to add up to 10 terabytes of additional storage to desktops or laptops to increase storage space as laptops have less capability to upgrade for higher storage. LaCie says that’s a 10 percent improvement over the previous generation.

The fifth SSD on our top 5 External SSDs with Thunderbolt port is the G-Technology 1TB mobile SSD.

When it comes to keeping your files safe and secure – whether from prying eyes or accidents – G-Technology is still king. The manufacturer’s G-Technology 1TB G-DRIVE mobile SSD, for example, is IP67 water and dust resistant can survive falls of up to 3 meters and has a 1,000-lb crush resistance.

Its transfer rate of up to 560MB/s and has features like USB 3.0 and Thunderbolt 3 compatibility. The hard disk is not cheap in the market so look for a deal and get it if you want a rugged storage device for yourself to fasten your workload.

GigaDrive is the hyperfast, water-, dust- and shock-resistant external SSD. The latest Thunderbolt 4 and USB4 tech make the most of its 4TB (and now 8TB) NVMe M.2 drive to achieve speeds of up to 2,800 MB/s.

There isn’t much choice in the thunderbolt category of external SSD rather you will find C-Type connectors or Gen 3.2 but Thunderbolt connecter is tough to find. So this was all about the top 5 External SSDs with Thunderbolt. If you think we have missed out on anything let us know in the comments down below!