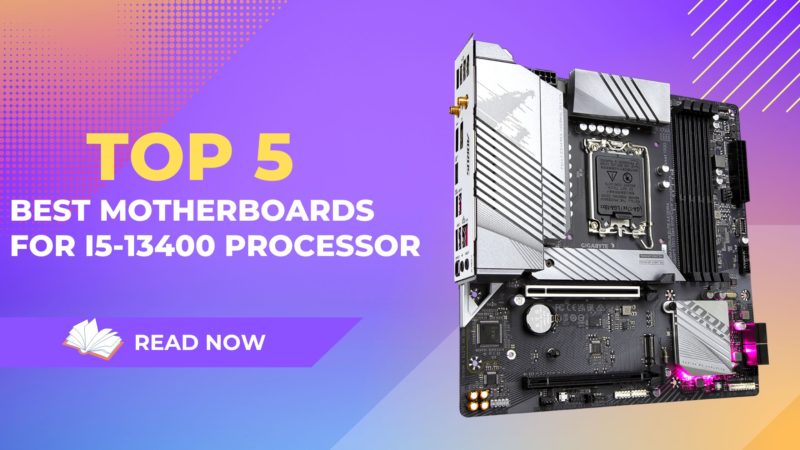 Recently Intel launched their new set of Intel Processors, a mix of mid-range and flagship products. They showcased their all-new Intel Core i5-13400 Processors, replacing the older Intel Core i5-12400 Processors. These processors, as expected, are much faster than their predecessors and will be more geared towards adapting the new B760 chipset and its features.

However, unlike AMD, Intel will continue the DDR4 support on this platform, thus making the B660 motherboards still have their foothold in the market. B760 motherboards were recently announced at the CES 2023, and Intel said their newer chips would have greater performance possibilities when paired with the new B760 boards.

Still, they added that the B660 chipsets are going nowhere and will continue to serve the low-mid budget consumers who won’t be using the features of a B760 but will still have the latest 13th Gen CPU running on a lower-priced B660 board with no performance compromises at all.

So without further delay, let’s quickly check out the Top 5 Best Motherboards for Intel Core i5-13400 and Core i5-13400F Processor.

The ASUS ROG Strix B760-F caught our attention as it is one of the costliest B760 boards we could find when writing this article. This Motherboard from ASUS has all the bells and whistles you need on a modern high-end Gaming motherboard.

The motherboard features support for 13th and 12th Gen Processor in an ATX form factor. It comes with the Intel 2.5Gb+WI-FI 6E, has DDR5 RAM support for up to 7800MHz on OC, and has the ROG Supreme FX 7.1 yAMP for better audio output quality and comes with the PCIe 5.0 x16 Slot. It has a lot of RGB; aesthetic-wise, it is pretty hard to beat this Motherboard.

The Motherboard also has a handful of IO Ports; aesthetic-wise, it has huge white heatsinks with RGB built in to make it look more elegant and classy. You can easily use this Motherboard if you build a small white PC. The price of this Motherboard is $217.

The MSI B760M Tomahawk Wi-Fi is the best DDR4 Motherboard you can buy for your Core i5-13400 Processor. This Motherboard supports both the Intel 12th and 13th Generation Raptor Lake Processor. It has a maximum memory speed of 5333 MHz.

One of the coolest things about this Motherboard is the availability of the NVMe Gen5 Slot, which can provide transfer speeds of up to 128GB/s. It has the latest Wi-Fi 6E technology and features Lighting USB, Dual layer PCB with 2oz Thickened Copper, M2 Sheild FROZR, Memory boost and Core Boost.

The Asrock B660 Steel Legend is the best b660 board you can find at a lower price than the B760 ones, with a great set of features paired with aesthetics. The entire ATX motherboard supports the Intel Core 12th and 13th Gen Processors.

Although this Motherboard won’t have support for DDR5, it runs great on the DDR4 platform, and the Core i5 13400 is one of the best value for money Gaming CPUs you can buy; you can pair these two and get excellent performance out of the box.

The Asrock B660M motherboard aesthetically looks nice, with a great touch on its heatsinks. Apart from that, it has a pretty excellent build quality and has great onboard RGB, which will fully complement it no matter what kind of m-ATX PC you build.

The Asus ROG Strix B660-I is an ITX DDR5 motherboard that supports all the 12th and 13th Generation Processors. It is the best Mini-Itx motherboard you can buy at a very reasonable price point for your build. It comes with all the latest technologies and supports NVMe 4.0 SSDs. Since it is an ITX motherboard, it has limited slots for plugging in RAM and PCIe devices.

But you get a complete set of Ports at the back of the MotherboardMoso don’t lose out on the expandability. It can be a great addition if you build a mini ITX Gaming PC, and the RGB on the MotherboardMoill help you sync up everything. This MotherboardMoupports both DDR5 and DDR4 RAM.

If you have missed anything, let us know in the comments below.