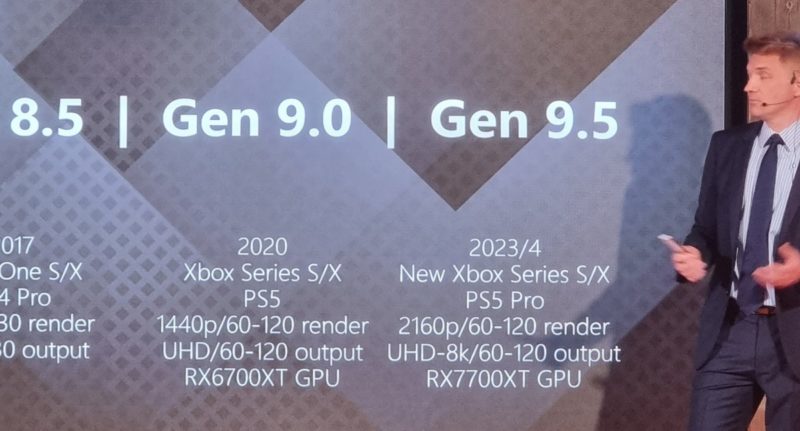 TCL claims that the new Sony Playstation 5 Pro and the Xbox Series X/S will be 8K Consoles featuring the latest AMD hardware.

TCL’s press conference in Poland, the TV maker, has laid out his predictions from the PlayStation and Xbox gaming consoles and how the market should prepare as rumours of the new lineup of consoles are incoming from both the console giants.

The upcoming console of Sony and Microsoft consoles shouldn’t be considered next-gen. The mid-gen update would feature an updated model of both the new PlayStation 5 and the new Xbox. The rumours are coming true, Sony and Microsoft will come out with new consoles, and this is the first time that a Television media has supported this prediction. There are also rumours that the new Sony PlayStation will be called the Playstation 5 Pro.

The company expects 8K capable devices to be unveiled with performance estimates of AMD Radeon RX 7700XT GPU. The graphics card, however, does not exist as of now. But, it will likely be based on Navi 32 GPU with RDNA3 graphics. There is no surety about the new consoles being based on RDNA3, but the last-gen console was based on the RDNA2 structure, which is very close to the next-gen.

The 4K rendering capability and 8K display output are based on temporal upscaling technologies, such as FidelityFX Super Resolution 2.0 and AMD’s technology.
Both the 8K Gaming consoles would be coming out by 2024. Sony’s Playstation and Microsoft’s Xbox One series took four years to get a mid-product-cycle update and seven years for a successor. Neither Sony nor Microsoft has confirmed that such updated consoles are planned. AMD has not made any comments yet.

So this was all about the latest claims and rumours from TCL that the new Sony Playstation 5 and the Xbox will be 8K Consoles.