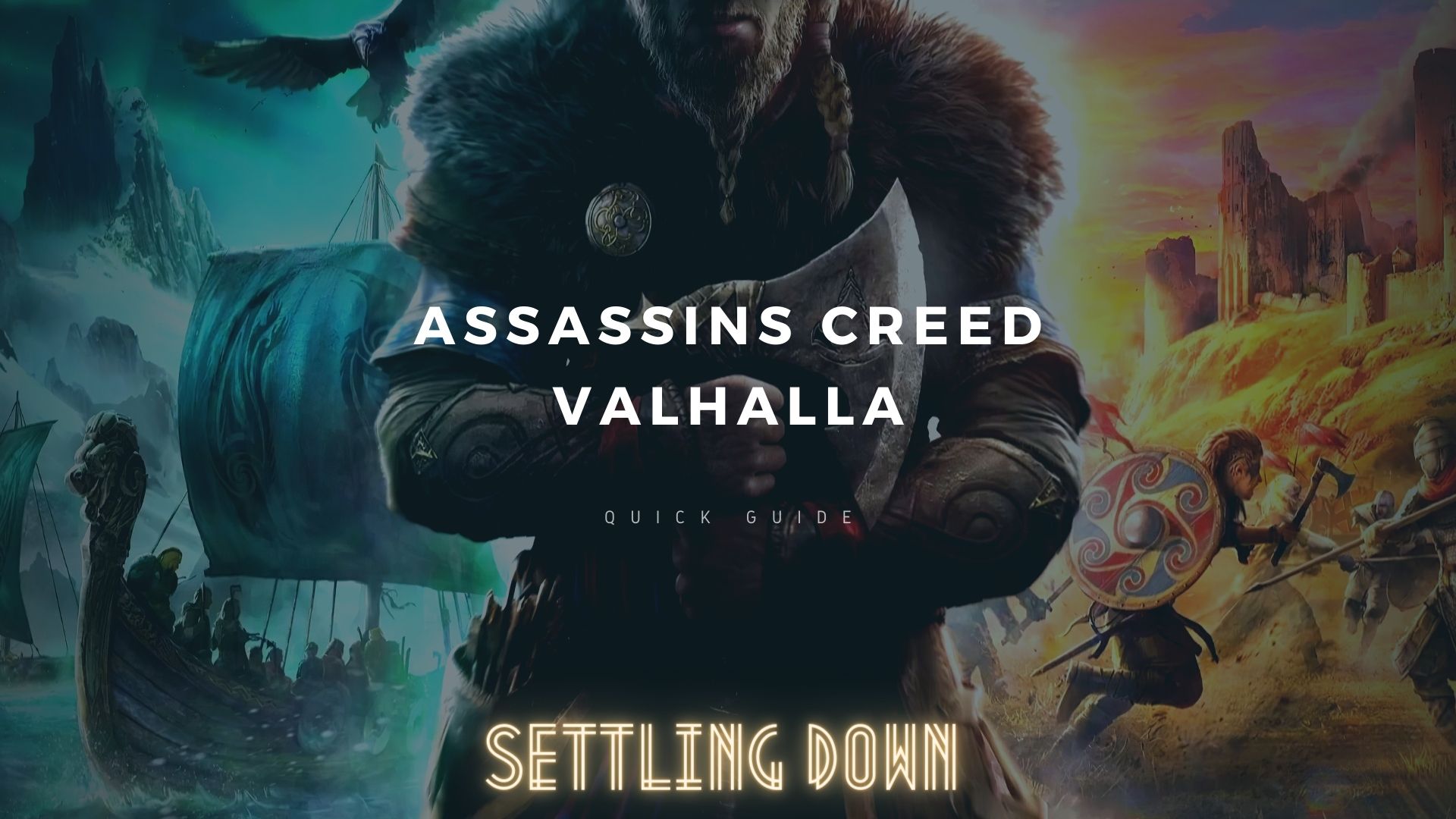 Welcome to another Walkthrough of Settling Down mission in Assassins Creed Valhalla.

Recapping a bit, we saw in the last mission, The Swan Road Home, Eivor and Sigurd leave for England and reach a shore called the Grantebridgescire. This is where Eivor will have to fight a bunch of guards and release the naval chain so that his Drakkar can pass through. Once he reaches Halfdan’s den, the Raven clan had to face the bandits to reclaim the land previously owned by Ragnar’s sons. The Raven clan fought bravely, reclaimed the land, and freed two prisoners, Yanli and Rowan. They both joined Raven’s clan thereafter.

In this Settling down the mission, Eivor is seen settling down with his clan, going on raids, etc. They have a lot of work to do before they can consider this their homeland.

The mission opens with you being in control of Eivor. Your first task is to go and speak to Gunnar. Run towards the objective marker and interact with Gunnar by pressing E. A cutscene will begin where Eivor says he needs some supplies and weapons for his next raid. Here you will learn that monasteries are filled with riches and loots. In the conversation, you will receive a map indicating the place you need to go to next. After this, run towards your Drakkar and sail towards the objective marker. To obtain more supplies for your own settlement, Eivor and his crew need to raid all the monasteries possible. Your main goal is Alcestre Monastery, which is located just outside Ravensthorpe.

Upon reaching the shore, position yourself properly and start the raid. Now I approached in two different ways. On the first try, I started the raid first and alerted them about our arrival. But on the second time, I jumped out of the Drakkar and used my Raven Vision to scan the area for enemies. After that, you can start the raid. So that you can have an idea of how to attack as you can all the highlighted enemies. Before you can start collecting the supplies, you have to fight back all the enemies first.

The enemies will consist of soldiers with Swords and shields as well as several Pikemen. You would also find warriors with two hand axes fighting against your clan. After defeating the enemies, run towards the church door to face a stronger opponent knight called the Yeoman. Parry his attacks and knock him off first. Eivor will call out to Dag to help him break open the door. Once you are inside the church, kill the remaining two guards. The Raw materials are hidden in a massive chest. Retrieve it by opening the lid of the chest with the help of another fellow Viking.

Your primary objective is complete. You can alternatively search for more supplies and items. You can find more supplies inside the burnt hut. Break open the house through the glass windows and retrieve another chest containing the raw materials. Break open the other two doors and leave the burnt, thatched house. It’s time for you to either venture the island or return to Sigurd to complete the mission. I have tried using a normal boat this time instead of the Drakkar, and I must say it’s pretty fast and feels great. The graphics and the vegetation look incredible. Once you have reached the shore of Ravensthorpe, approach the board near Gunnars. Interact with him. After a small cutscene with Gunnar, you have to go and build up a forge.

After finishing the work, go and meet Sigurd. Again a small cutscene will begin where Sigurd offers Eivor a room at the longhouse. You can try interacting with some of the items. After checking out everything, run to the Stable to talk to Sigurd again and complete the mission. After completion of the Settling down mission, you will be rewarded with 3400XP. Click here to go back to the Walkthrough List page.

The next mission is “The Alliance Map!” Let’s go!!

That’s all for now
Until next time…