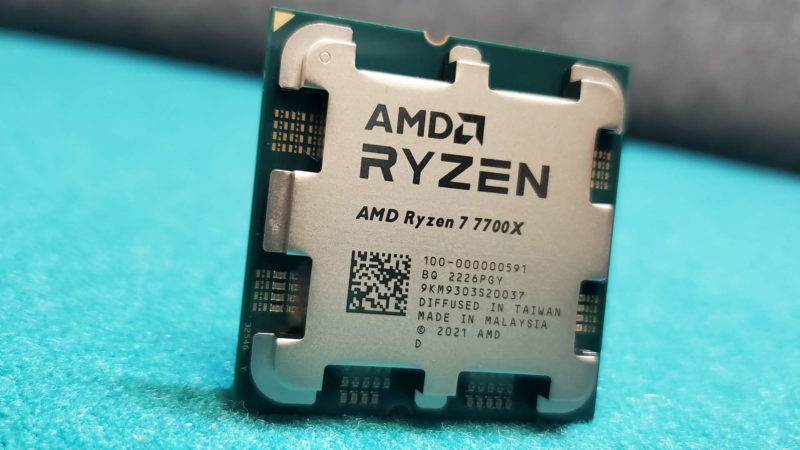 We will look at the all-new AMD Ryzen 7 7700X Performance benchmarks to see how it is for gaming and content creation applications!

We will be checking out the all-new AMD Ryzen 7 7700X Processor recently revealed at an event hosted by AMD. AMD, along with the Ryzen 7 7700X, released three more processors, the AMD Ryzen 5 7600X, AMD Ryzen 9 7900X and the AMD Ryzen 9 7950X. We decided not to do all the performance charts in a single article but instead keep it different so that we can dive deeper into each of these.

The all-new AMD Ryzen 7 7700X is an octa-core processor with sixteen threads, and it has a base clock of 4.5Ghz and a boost clock of 5.4GHz it features a single 5nm die along with six 6nm I/O die and features 8MB L2 Cache and 32MB L3 Cache. It also comes with the all-new DDR5 RAM Support and a TDP of around 105W and is built on the all-new AM5 Socket.

So without further delay, let’s check out the AMD Ryzen 7 7700X Performance and answer the question of whether you should upgrade now for gaming.

Here are the full specifications and details for the AMD Ryzen 7 7700X CPU.

AMD Ryzen 7 7700X CPU is now available globally with all the major online and offline retailers with a starting price tag of $399. But the price of this Processor may vary from one country to another.

We used these system specifications to test out the AMD Ryzen 7 7700X.

Such a powerful processor needs a proper cooling solution to deliver as much performance as possible with the thermal headroom. Under heavy load, you won’t be crossing 95 degrees, which will apply to the 12 and 16-core processors. So we used the Arctic Liquid Freezer II 420 mm Cooler to test the Thermal Performance, and at stock speeds, the gaming temperatures stayed at around 72-75 degrees Celsius. At the same time, during CPU workload, it went as high as 94-degree celsius.

The AMD Ryzen 7 7700X is an excellent CPU with an overall performance increment. It offers fantastic Gaming and Computing Performance. The Processor supports the all-new PCIe 5.0, and it comes with an integrated Graphics card as well. AMD also said the existing coolers are compatible with all the AM5 Sockets. The Processor is fully unlocked with a single CCD Design and supports the latest DDR5 platform. It is a great high-end processor for both gamers and content creators.

On the flip side, the new AM5 platform right now is very costly, and it demands high-end coolers to keep it within its thermal limits. It also has very long boot times, it doesn’t support DDR4, and no CPU Coolers are provided with it.

So this was all about the AMD Ryzen 5 7600X Performance. If you feel we have missed out on anything, let us know in the comments below.