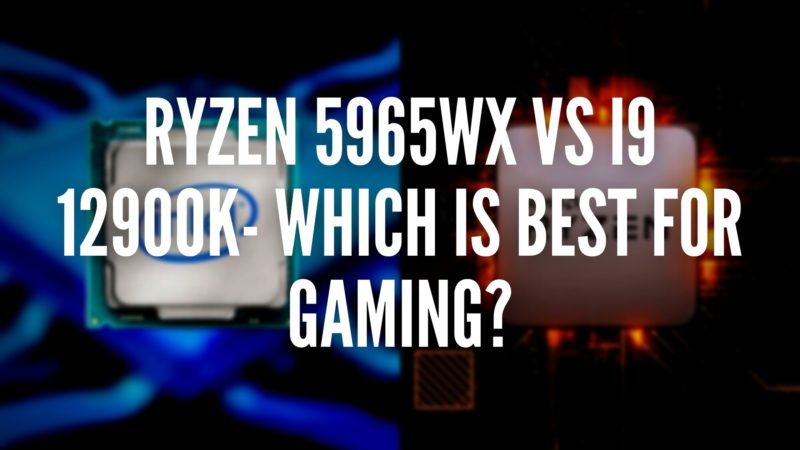 We have tested the out Ryzen 5965WX vs i9 12900K to see which processor performs the best for next-gen Gaming.

For both Gaming and Content Creation, Intel and AMD both have their very own flagship processors for PC ready in their arsenal. Their CPU models hold unlocked features with no Frequency capping. The flagship model from Intel is Core i9 12900K, while the flagship from AMD is Ryzen Pro 5965WX. Both CPU delivers an extreme level of performance to fulfil every gamer and content creator’s demand with no compromise. But obviously, you need the best hardware combination of your motherboard, GPU, RAM, etc., to let the CPU deliver its ultimate performance.

So, in this case, both variants of CPU are incredibly pricey. It doesn’t come even within the range of budget-oriented gamers, and we had to clear this confusion, so we tested the Ryzen Pro 5965WX vs Core i9 12900K to see which is the best for Gaming. The outcome of this test will guide you to decide which top variant CPU will be good for you before you spend a considerable amount of money on them.

So without further delay, let’s check out the Ryzen Pro 5965WX vs Core i9 12900K CPU battle to see which CPU will be best for your highest-end gaming experience.

Here is the full details of the AMD Ryzen Pro 5965WX and INTEL Core i9 12900K CPU electronics architecture.

Threadripper vs Core i9 – Test Setup

Here are the full details of the system that we used for our Ryzen Pro 5965WX vs Core i9 12900K CPU battle experiment.

Here are the test results for the Ryzen Pro 5965WX vs Core i9 12900K model. All the latest-gen games have been tested at 1080p FHD Native resolution on ultra-high settings.

So as you can see from the test results themselves, the performance is more inclined towards the 12th Gen Intel Processor. Except for Microsoft Flight Simulator, all the other games we have tested benefit in favour of Intel. This is high because of Intel’s single-thread performance, which is much better in Gaming.

Always remember that Games work well when the single core performance is better. Although it would be wrong to say that AMD is not good at Gaming because the performance results we are seeing are much higher than the FPS that we would require or is visible to the naked eye. Even if you go with the Threadripper Ryzen Pro 5965WX, you won’t be making a wrong choice because these processors are meant for multitasking, and even Intel cannot beat AMD when it comes to multitasking.

The Ryzen Threadripper is a great processor for content creation like video editing, high-end music production and other applications which require extensive resources to run correctly. To keep it simple enough, if you are a gamer looking to improve your Gaming Experience, you can go with the Intel Core i9 12900K. Or, if you are a content creator and play games casually, you can very well get away with buying the AMD Threadripper 5965WX.

So this is all about AMD Ryzen Pro 5965WX vs Intel Core i9-12900K Gaming Performance. Don’t hesitate to comment below if you think we have left out something.