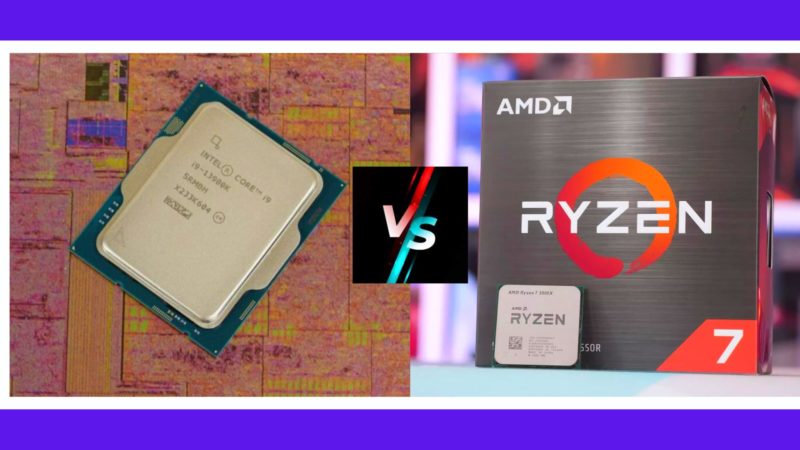 We are looking at the AMD Ryzen 5800X3D vs Core i9 13900K Processor Benchmark to see which performs best.

The Intel Core i9 13900K was recently released after Intel had been teasing it for a long time. These Raptor Lake chips are fantastic, and many articles are written on our website relating to the performance and how it stacks up against the competition. Remember that the Intel Core 13th Gen supports both Intel and AMD Processor; on the other hand, we have the AMD Ryzen 7 5800X3D, the first processor with an AMD 3D V-Cache Technology. It is the first processor with a stacked L3 cache and features 96MB of Total cache.

So we decided to throw these two processors on our test benches and test them head to head. As the price difference is also not very high for high-range CPUs, this test will help us find how much difference it makes when upgrading from a Ryzen 7 5800X to an Intel Core i9 13900K.

Here are the details of the test setup we used for the Ryzen 5800X3D vs Core i9 13900K CPU battle experiment.

We tested out all of the latest games at 1080p. We could have quickly gone with 4K, but keeping in mind the gamers are still stuck with 1080p resolution, we thought we would stick with FHD resolution for this article. Remember that all the games were played at the Ultra settings at a resolution of 1920x1080p.

From the performance numbers, it is pretty much evident that the winner over here is the Intel Core i9 13900K. Right now, the Core i9 13900K is the fastest CPU on the planet and occasionally beats out the AMD Ryzen 9 7950X. Plus, the Intel Core i9 13900K also features support for both DDR4 and DDR5 memory. In this test, we have used the DDR5 RAM and placed it against the DDR4 platform to see how much of a difference it will make in Gaming. And it does make a difference of at least 20%, although, in some games, the numbers are pretty close.

The AMD Ryzen 7 5800X3D is still a great processor for gaming and content creation titles. The Intel 13th gen also has an advantage for two reasons: the platform and the features, which made Intel much faster. But right now, the newer generation Intel 13th Gen, the AMD Ryzen 7000 Chips, and the latest motherboard are pretty costly. If you are not concerned about gaming, then the AMD Ryzen 7 5800X3D can be an excellent cost-cutting option, but the disadvantage is that you won’t be able to use the latest DDR5 platforms.

The AMD Ryzen 7 5800X3D is around $449, while the Intel Core i9 13900K is priced at around $589, almost double. And this is where the cost-cutting comes into play. If you are okay with the DDR4 platform, which is here to stay for the next 3-4 years, then the 5800X will be a better choice but if you are planning not to upgrade your system for the next 5-6 years, then dont think anything less than the Intel Core i9 13900K.

So this was all about the Gaming Performance difference between the Intel Core i9 13900k and the AMD Ryzen 5 5800X3D. If you think we have missed anything, let us know in the comments below.