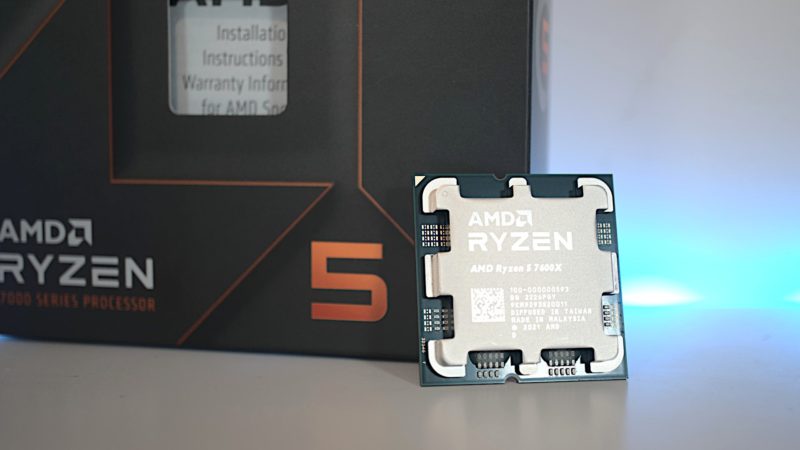 We will look at the all-new AMD Ryzen 5 7600X Performance benchmarks to see how it is for gaming and content creation applications!

We will be checking out the all-new AMD Ryzen 5 7600X Processor recently revealed at an event hosted by AMD. AMD, along with the Ryzen 5 7600X, released three more processors, the AMD Ryzen 7 7700X, AMD Ryzen 9 7900X and the AMD Ryzen 9 7950X. We decided not to do all the performance charts in a single article but instead keep it different so that we can dive deeper into each of these.

The all-new AMD Ryzen 5 7600X is a Hexa core processor with twelve threads, and it has a base clock of 4.7Ghz and a boost clock of 5.3GHz it features a single 5nm die along with six 6nm I/O die and features 6MB L2 Cache. It also comes with the all-new DDR5 RAM Support and a TDP of around 105W and is built on the all-new AM5 Socket.

So without further delay, let’s check out the AMD Ryzen 5 7600X Performance and answer the question of whether you should upgrade now for gaming.

Here are the full specifications and details of the AMD Ryzen 5 7600X CPU.

AMD Ryzen 5 7600X CPU is now available globally with all the major online and offline retailers with a starting price tag of $299. But the price of this Processor may vary from one country to another.

We used the system specifications to test the AMD Ryzen 5 7600X.

Here is the AMD Ryzen 7600X Performance Chart compared to 5 other processors.

Here is the AMD Ryzen 7600X Gaming Performance Chart compared to 5 other processors at 1080p.

It is safe from the benchmarks that the all-new Ryzen 5 7600X is approximately 19-20 times faster than its predecessor AMD Ryzen 5 5600X and offers excellent performance compared to the top-tier Intel Core i9 processor.

Although the AMD Ryzen 5 7600x is a CPU and not an APU, so you can’t expect it to perform like an APU or give out a performance like a dedicated Graphics card. You need to have a separate Graphics Card to get the best performance. However, out of curiosity, we tested the Shadow of Tomb Raider at the lowest settings in 1080p.

Such a powerful processor needs a proper cooling solution to deliver as much performance as possible with the thermal headroom. Under heavy load, you won’t be crossing 95 degrees, which will apply to the 12 and 16-core processors.

The AMD Ryzen 5 7600X Processor is an excellent mid-range priced CPU that performs at par with the Intel Core i9 flagship with certain games and applications. The price is competitive but disappointing at some point because the launch prices are high. Right now, if you are too conscious about your budget, then AM5 won’t be so appealing to you as the x670 motherboards are very costly.

You might get the AM4 platform, or if you want to future-proof your PC, you might go with the Intel 12th Gen Processor. You can’t go wrong even if you choose the last gen. For high-end PC shoppers, you can get the AMD Ryzen 5 7600X as this is one of the best value CPUs, and it’s about 10% faster than the Intel 12600K Processor.

So this was all about the AMD Ryzen 5 7600X Performance. If you feel we have missed out on anything, let us know in the comments below.