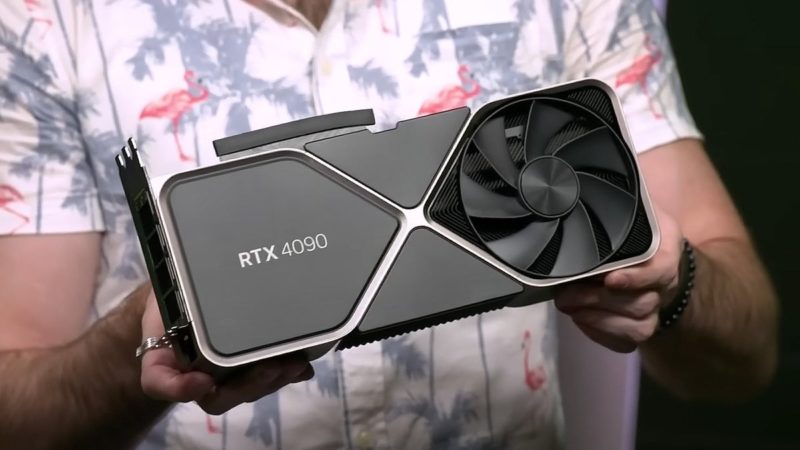 We ran a Gaming Benchmark Test between the all-new RTX 4090 vs RX 6950XT GPU performance to see which is best for Gaming.

Recently Nvidia launched the all-new Geforce RTX 4090. Here is a full review of the RTX 4090 if you are interested. With the new GPU, Nvidia ensures that all modern games will run better and faster with their latest RTX GPU. The new DirectX Ultimate supports Ray Tracing, Variable Rate Shading and alot more. This is a 384bit card and takes up to three slots on your motherboard. The power draw is rated at 450W through a 16-pin power connector. It features 1 HDMI 2.1 and 3 DisplayPort 1.4a and comes for $1599.

The AMD RX 6950XT was launched last year and is based on the 7nm process, and it is the flagship GPU that represents the AMD Graphics Cards Lineup. The GPU features 80Ray Tracing Cores, and AMD pairs it with 16GB GDDR6 memory instead of 24GB on the RTX 4090. The card has a maximum power draw of around 335W. The GPU features Display outputs like 1x HDMI 2.1 and 2x DisplayPort 1.4a.

Right now, both of them are flagship GPUs of the two Graphics Card Manufacturing Giants. So we decided to test them head to head to see how much difference RTX 4090 makes in performance when thrown against the RX 6950XT.

Here are the detailed RTX 4090 vs RX 6950XT GPU hardware specifications used for our GPU tests.

Here are the specifications of the Test Setup used for the RTX 4090 vs RX 6950XT GPU battle benchmark experiment.

Here are the gaming fps benchmark outcome details of the RTX 4090 vs RX 6950XT GPU battle experiment. All games were tested at 4K.

These results are awe-inspiring, and for 4K, if you are currently running a 6950XT, it is worth upgrading to an RTX 4090 Graphics Card. Every AAA title we tested out had framerates almost doubled with the RTX 4090 over the AMD Radeon RX 6950XT.

The flagship RX Graphics card is already a 4K ready card scoring 60FS in all the games except Spiderman and Microsoft Flight Simulator but very much playable. In CSGO, we didn’t see much of an improvement as we are already getting 450+ FPS, and I don’t think we need more FPS in CSGO, so that difference is considerable. But with the more significant AAA titles, the RTX 4090 shows its worth.

With a price tag of $1599, it is a bit expensive, but if you want to get one for yourself, it will be one of the best investments for Gaming. And if you have a budget of $1000, then the RX 6950XT is worth it for gaming, although we would love to add that the RTX 4090 performance will be excellent for the new 500Hz Gaming Monitors.

So this was all about the RTX 4090 vs RX 6950XT Performance Comparison. If you think we have left out anything, let us know in the comments below.