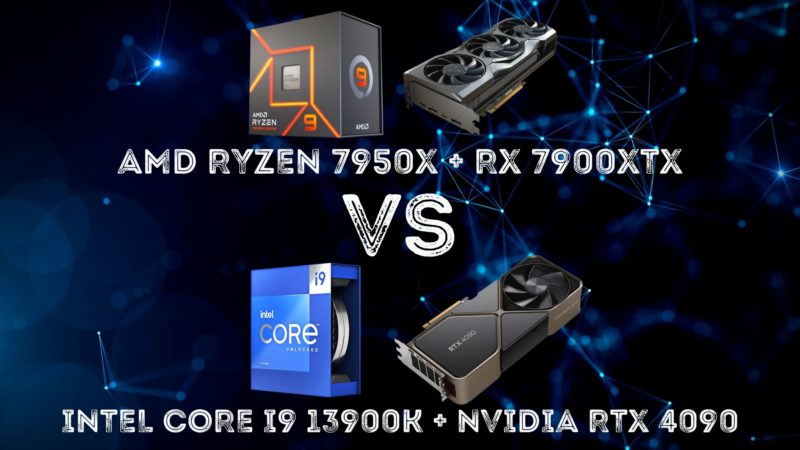 There is a saying that you will get the best performance when using AMD-specific systems or Intel + Nvidia system combinations. And maybe that is true in some cases, although in recent years, with the advancements of chip technology, it doesn’t matter what combination you use.

I won’t say there won’t be a difference at all. There will be, but that will be very negligible as both Nvidia and Radeon are very competitive in manufacturing GPUs. No brand wants to lose out on sales, which is why all the GPUs are tailored to work with all the supported CPUs despite being on different brands.

And recently, with the entry of Intel Arc Graphics cards in the market, the competition between these brands is much more intense. But who cares? We are testing out two flagship systems that we have in our office.

Here are the specifications of the CPUs and GPUs separately that we have used in our test system.

Here are the test results we have achieved using the flagship combinations of Intel, Nvidia, Radeon and AMD. All games were set to 4K resolution running on ultra-high settings.

The above chart list shows that with the pairing of Nvidia GPU with the Intel CPU, the performance is much ahead of the combination of AMD GPU and CPU. In almost every game, the Nvidia RTX 4090 GPU and Intel Core i9 13900K CPU has provided at least 20+ fps only, except Cyberpunk 2077, where the difference was a little less than the above-mentioned 20FPS.

These CPUs never thermal throttled during the tests and provided a lag-free and a very smooth experience. The GPU temperature which is listed is the stable temperature while gaming mode. In this case, Nvidia RTX 4090 remains cooler than RX 7900XTX at an average of approximately 10℃. Also, these GPUs never reached their thermal throttling point and performed flawlessly.