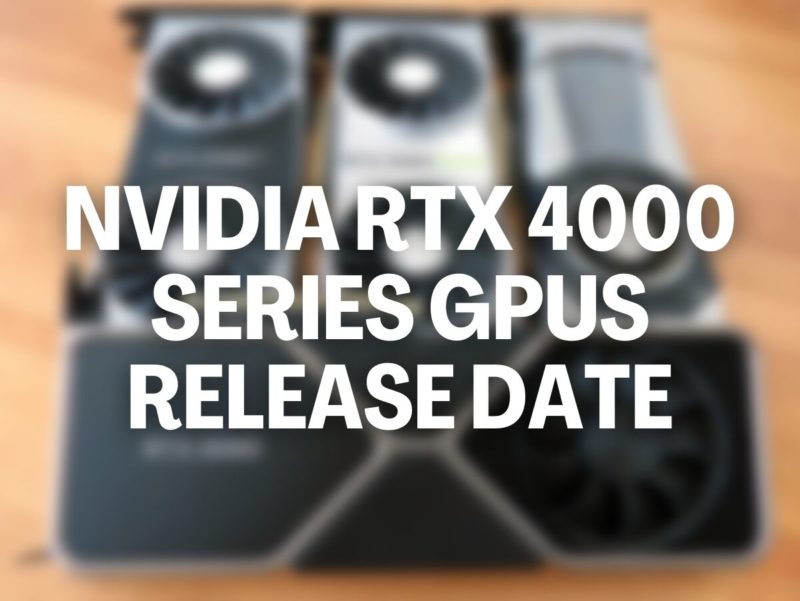 The RTX 4000 Series Release Date has been announced. And yes it is coming out in early Q3. Here is what we know about it!

A few months ago we have seen the launch of one of the fastest and strongest Nvidia RTX 3090Ti Graphics cards. Nvidia claimed that the RTX 3090ti is the fastest GPU in the world. But recent some trusted sources from Twitter and Reddit are already giving us a hint of the upcoming RTX 4000 series Graphics Cards. Also, there was a rumour that Nvidia is going to skip the RTX 4000 Series and instead release it as an RTX 5000 series. But it comes out as a piece of fake news.

Previously, We have gathered plenty of information from the Twitter user kopite7kime about the specs of the RTX 4000 Series GPUs. The RTX 4000 cards are based on Nvidia’s “Ada Lovelace” architecture. We think that this year with their Nvidia 4000 series cards, the company will have to face a tight competition with both AMD and Intel. Because AMD’s 7000 series cards and Intel’s ARC Alchemist GPUs are expected to launch at the same time. So, this time, the war between the prime Graphics Cards manufacturers is real in 2022.

Now, recently, just 2 days ago, Twitter user kopite7kimi posted a picture with a statement. His post directly indicates the launching date of the Nvidia’s awaiting RTX 4000 series cards. According to his recent statements on Twitter, Nvidia’s Next-Gen RTX 4000 series GPUs are rumoured to come this July 2022.

kopite7kimi’s statement led to a buzz in the PC Gaming Community. Because this is the perfect time for them to launch the GPUs as well because the prices of the Graphics cards are falling rapidly due to the fall of mining bitcoins. The price drop should also help gamers who want to get a new GPU or upgrade the current one. Also, some of the trusted leaked sources suggest that these 4000 series cards will be fully Anti-mining with 100% LHR locked. Nvidia also planned has increased its production to supply more GPUs to the gamers to stop the GPU crisis once and for all.

Although, there is no information about which particular card of the RTX 4000 GPU will be available during the initial days of launch. But some speculations suggested that Nvidia will initially release the high-end models before rolling out the entry-level cards.

So, these are the latest updated news about the Nvidia RTX 4000 Series release date.  If you have something to add, feel free to comment down below. Also, keep an eye on Techuda for more latest tech news.