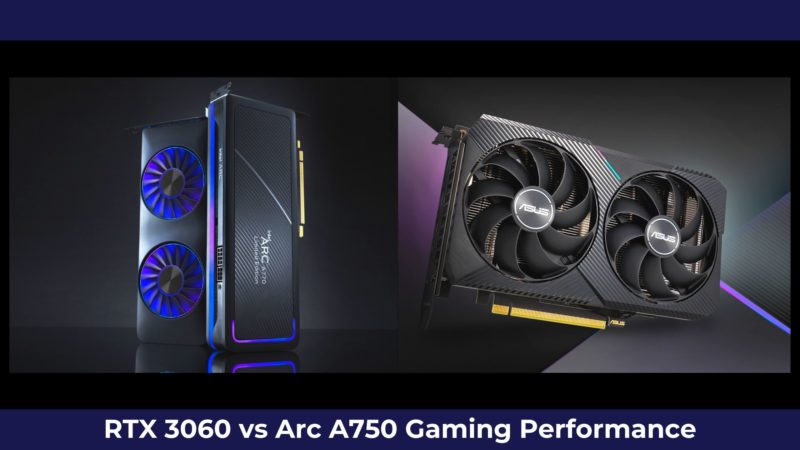 This article lists the performance difference between the RTX 3060 vs Arc A750 when it comes to Gaming benchmarks.

The RTX 3060 is a mid-range Gaming GPU from Nvidia that launched in 2021. The price of the GPU during the release was around $329, and it was the perfect GPU for any Mid-Range Gaming PC. It features a massive 12GB Video memory and a 192bit Memory Interface. The maximum power draw of this GPU is 170W, and it performs well in games. Ray Tracing is enabled on this GPU with 28 RTX Cores to enjoy games with RTX on.

On the other hand, Intel has released its dedicated Alchemist GPUs for Desktops launched in Q4 2022. The new Arc from Intel is built on a 6nm Process and features 8GB Graphics Memory. It costs around $289, around $40 less than the Nvidia RTX 3060. This GPU also features 28 Ray Tracing Cores and a higher 256Bit Memory Interface.

We have tested both cards head to head to see which performs best in gaming performance.

Here are the details of the specifications of these two GPS from different companies.

Here are the details of the test setup we used for the RTX 3060 vs Arc A750 GPU experiment.

The above gaming fps benchmark outcomes show that both GPUs have performed their way. In some games, Intel ARC A750 has taken the lead, while Nvidia RTX 3060 is in others. The maximum performance results between the two GPUs are around 10 FPS-15 FPS.

In our opinion, if you are in a hurry, then go for the Intel ARC A750. Because of the minimal fps difference, you don’t need to spend an extra $40, as it will be a total waste of your money. Although we should also add that the Intel Alchemist GPU gives issues whenever you are trying to run an older game because the newer Intel GPUs are not designed to handle older games or applications. But Intel will soon fix these with more and more driver updates in the future.

So this was all about RTX 3060 vs ARC A750. If you feel we have missed anything, let us know in the comments below.