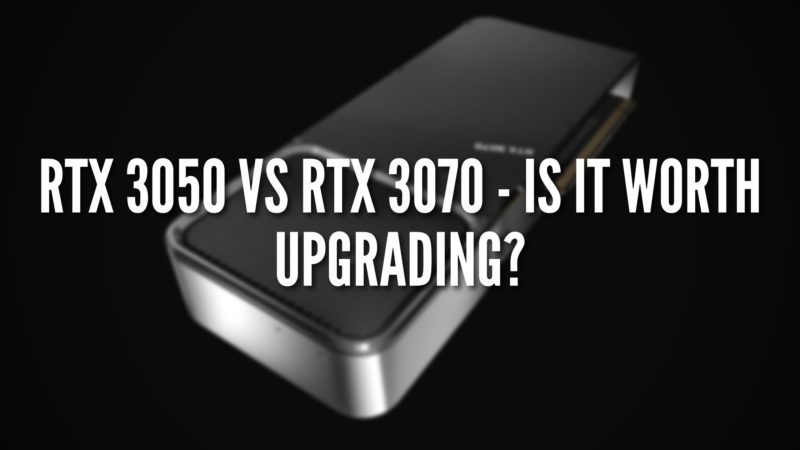 We will show you the Gaming performance benchmark between the RTX 3050 vs RTX 3070, how much of a difference it makes in performance, and whether it is worth upgrading primarily for Gaming.

The RTX 3050 is priced at $249, while the RTX 3070 from Nvidia is priced at $499. The price is double that of an RTX 3050, but are we getting the double performance while paying the double price? In recent times, as the cryptocurrency market dropped, the demand for GPUs also dropped; thus, the price went down and right now, it is the perfect time to pick up the 3000 series Nvidia RTX Graphics cards. And since the 4000 series is just around the corner, it is great to see that the prices are normalized, and most of the gamers who couldn’t afford GPUs because of the global chip shortage can afford them now because of the pricing.

Many gamers still use their older GTX 1050ti or GTX 1650 and want to upgrade to the latest one but under a budget. For that, we would suggest going with an RTX 3050, but if you have a GTX 1070, GTX 1660ti or even an RTX 2060, your upgrade to an RTX 3070 can be worthwhile. But in terms of Gaming, how much difference does it make and are we getting double the performance while paying the double price premium because both the GPUs come with 8GB of Video memory?

So without further delay, let’s check out the RTX 3050 vs RTX 3070 Graphics Gaming Performance and whether it is worth upgrading.

We ran games at FHD 1080p resolutions for both the GPUs and cranked up the settings as much as possible. Here are the test results below.

From the test results, we can see that there is a huge performance leap when you are upgrading from the RTX 3050 to RTX 3070. The games we have tested out are set at the maximum settings, and the games are running at 1080p FHD. The games we have tested out feature high-end photorealistic graphics. The performance jump is enormous, and the RTX 3070 shows its power while running all the games at ultra settings on 1080p. But the RTX 3050 is no less giving more than 60FPS on all the AAA titles, and you won’t be disappointed if you are low on budget.

It is worth upgrading if you consider the performance benefit you will get when upgrading from an RTX 3050 but is it worth it? I would say it depends on the preference. The RTX 3070 from Nvidia is undoubtedly a powerful card, and we think if you have an older GTX 1070 or even an RTX 2060, upgrading to the powerful RTX 3070 is worth it. But if you already have an RTX 3050, we suggest you wait for the 4000 series.

So this was all about the RTX 3050 vs RTX 3070 Gaming Performance. If you feel we missed out on anything, let us know in the comments below.