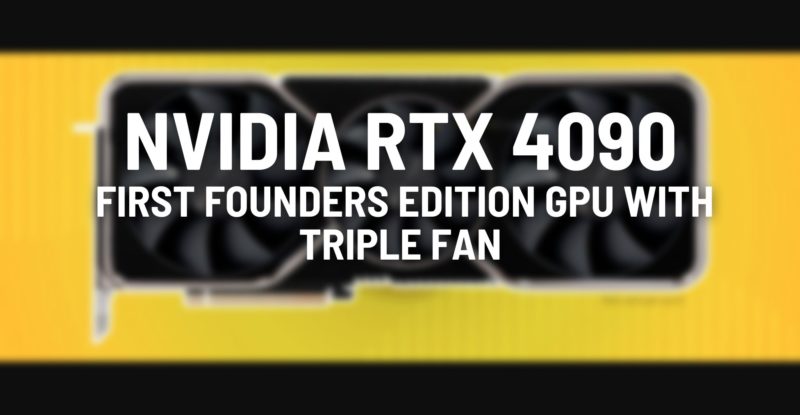 Nvidia RTX 4090 GPU is launching in October 2022, and for the first time, an Nvidia Founders Edition Card will feature Triple Fan Cooling.

The hype for Nvidia 4000 series card RTX 4090 GPU is real Nvidia fans and hardcore PC gamers are waiting for this behemoth of a graphics card to release. After so many rumours about the release date, power demand, and internal architecture, there is a new rumour about the thermal solution Nvidia will bring in with their new RTX 4000 Series Graphics Cards.

According to the rumours, Nvidia will first launch their flagship GPU Geforce RTX 4090 in their 4000 series GPU Launch in Oct 2022. After that, the rest of the models will be released one at a time. And for the first time in the history of Nvidia, this flagship founders edition card will feature a total of 3 fans.

We can remember the dialogue of Uncle Ben from Spider-Man – “With Great powers come with great responsibility”, So Nvidia is taking full responsibility for this graphics card’s thermal and cooling section. In their previous flagship founders edition model, we saw that RTX 3090 Ti had an improved heat sink and featured two big fans. The fan and large heat sink combination delivered excellent performance without thermal throttling. So now, as the RTX 4090 card features a massive power demand, it will get hotter, primarily when gaming.

Twitter user “kopite7kimi” is a trusted news leaker where most of his previous statements have come out as trustworthy news. Recently, he posted on his Twitter account about the upcoming Nvidia’s most awaited flagship monster Geforce RTX 4090. This suggests that the upcoming Nvidia 4090’s AD102 architecture board is manufactured with a triple-fan, So these massive fans are placed for massive heat dissipation.

It is a pretty good idea for Nvidia because gamers didn’t like the blower-style cards as they tend to get too hot, affecting gaming performance. So nowadays, you need to have great thermals on your Graphics card so that they can perform at their best.

So this was all about the latest information about the upcoming Nvidia’s most awaited monster flagship GPU RTX 4090 Triple fan design rumour. If you have something to add, feel free to comment below. Also, keep an eye on Techuda for the latest tech news.