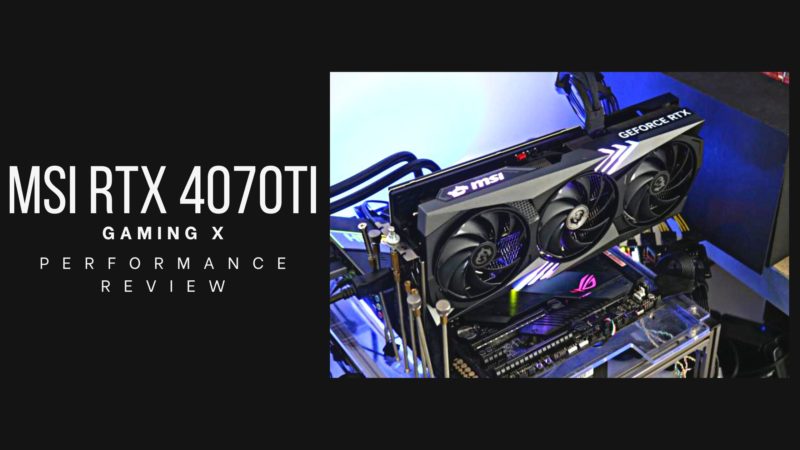 The new MSI RTX 4070Ti Gaming X Graphics Card is a Game changer in Gaming Performance as it is one of the fastest 4070ti.

After releasing the RTX 4090 and 4080 Graphics cards in the market, Nvidia recently launched the 4070Ti GPU at CES 2023. It belongs to the latest generation 4000 series family. This is an enthusiast-level mid-range graphics card which cannot be called a mid-range as the price is relatively high in some countries. With the latest Ada Lovelace design, this card can easily handle all the latest AAA Gaming titles.

As Nvidia handed over the technology of this GPU to the aftermarket board manufacturers, MSI is the 1st company that has released its version of the Nvidia 4070Ti GPU known as the MSI RTX 4070Ti Gaming X. Although there are other versions of this RTX 4070Ti GPU available, like the Suprim X Version and the Ventus OC Version.

As soon as we received the MSI RTX 4070Ti, we quickly unboxed it, checked and tried running some games on it, so without further delay, let’s review the performance of the all-new MSI RTX 4070Ti Gaming X GPU.

Below are the details specifications of the MSI RTX 4070Ti Gaming X GPU.

MSI RTX 4070Ti Gaming X is available worldwide with all major online and offline retailers with a starting price tag of $799. The Gaming X version will cost around $840. But this Graphics card’s price may vary from country to country.

The MSI RTX 4070Ti Gaming X has the excellent build quality and is sturdy. It comes with three big fan designs and an RGB light option near the middle fan and top area. The strong and higher metal build backplate comes with the big MSI Logo with many screws. The card has a black and grey colour finish to it.

The heat sink system is perfect, adequately attached to the card, and provides proper cooling to the GPU die itself, memory controllers, and the VRM. It also includes a total of six heatpipes. This is quite common because it is always known for its thermal solutions for its products.

From the design, it will take three slots in your Gaming cabinet with a massive area coverage. The card weighs around 1.16kgs, and the connectivity Port includes three Display Ports 1.4 and one HDMI 2.1 Port. Gaming BIOS Switch also enables the GPU to run at aggressive speeds.

Here are the details of the test setup which we have used to test the capability of this MSI RTX 4070Ti GPU. Remember that this GPU uses the 12+4 Pink 12VPHPWR Connector and requires a 600W Power draw. We tested out the Games using the Nvidia driver version 527.37 WHQL Drivers.

Here are the Gaming Performance benchmarks of the MSI RTX 4070Ti Gaming X Graphics card. We have also included the average temperature of the card when playing and testing out the various games.

We tested the games in all three resolutions, starting from FHD, 2K and 4K.

From the above chart list, we can see that in every latest-gen game, the MSI RTX 4070Ti Gaming X Series GPU has delivered more than 150fps in almost every game in 1080p. When the resolution was set to 1440p, it produced more than 100+ fps in nearly all the games. But when the resolution was selected to 2160p or 4K, most games averaged around 70-80 FPS, while some games didn’t cross 60FPS when running at high-resolution displays.

Not all games are designed to run equally better, no matter which graphics card you use. The main factor lies around the optimization of the games. For example, Cyberpunk 2077 scored the lowest 44 FPS on 4K, which is playable but not at the solid 60 FPS. We tested Cyberpunk with the post-performance patch released a few days back.

The temperatures on this card are excellent, with the GPU not hitting more than 60 degrees in any of the games we tested. This speaks volumes about the Graphics card and its cooling capabilities, and we are delighted with how the MSI RTX 4070Ti is shaped.

All the games ran smoothly, and the MSI 4070ti GPU didn’t create any issues. And playing games for a couple of hours, we can say that you can surely recommend getting the MSI RTX 4070Ti if you are on the verge of upgrading your graphics card.

So this was all about the MSI Gaming X RTX 4070Ti Performance Review. If you think we missed anything, let us know in the comments below.