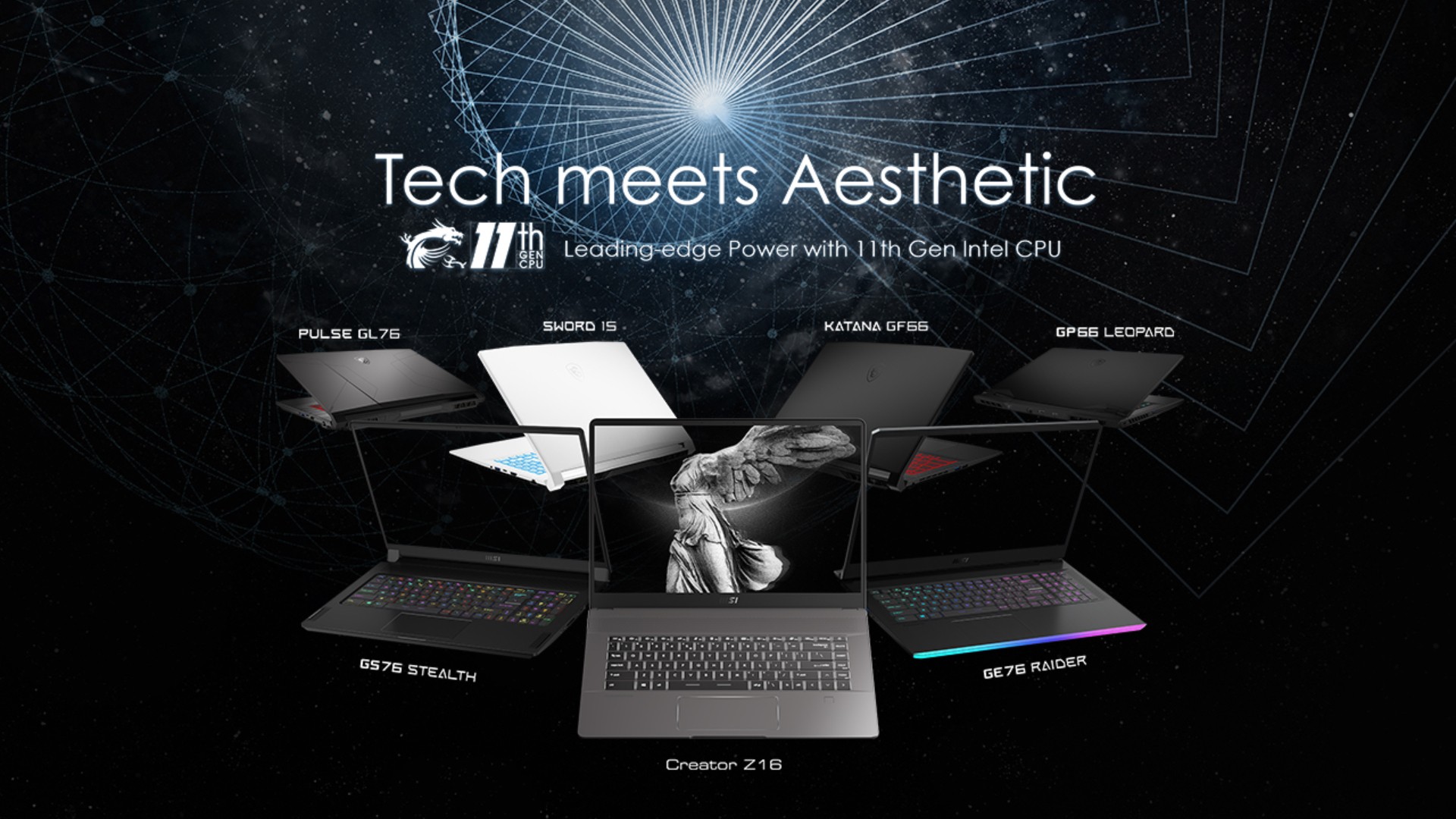 MSI new laptop means it’s time for a new MSIology event. This is where the Tech meets Aesthetics!

MSI’s collaboration with Intel and Nvidia brings the Resizable Bar Technology for the RTX 3000 series graphics cards where the CPU will have the full and direct access to the GPU memory thus enhancing the Gaming experience by providing a smooth and consistent frame rate.

Read the blog further to know all the about MSI new laptop for Gaming that was launched today at “MSIology” Virtual Event.

This year MSI did a complete refresh of the older models. And especially for the first time ever, MSI came up with white Gaming laptops under the GF series. The GL Series also got its aesthetic upgrade and the same with the rest of the product lineup. All the MSI Laptops are powered by the latest Intel Core i5/i7 11th Generation H Series Processors. Paired with the latest Nvidia’s RTX 3000 series ranging from the RTX 3050 to RTX 3080.

One exciting launch which we cannot wait to dive in and check out is the Creator Z16 Content Creation laptop. A very different kind of a laptop perfect for Content Creators.

The all-new MSI GF Sword Series laptops are the successors to the last-gen GF63 and GF65 Gaming Laptops. The Sword Series mainly comes in White and it looks very beautiful aesthetic-wise. Featuring the Blue Backlit keyboard along with a 144hz refresh rate panel. Powered by the latest Intel Core i7 11th Gen Processor and will come in RTX 3050, RTX 3050Ti, or RTX 3060 depending on the variant. There are two variants of the GF Sword Series, GF Sword 15 and GF Sword 17.

The all-new MSI Laptop under the Katana series is a direct successor of the earlier GF65 Thin Gaming Laptops. With a much improved cooling solution. More or less the black version of the MSI Sword series. It comes in a black brushed aluminum finish with red MSI accents. They will also be shipped with the latest Intel Core i7 11th Gen Processors and Graphics card ranging from RTX 3050 to RTX 3060. It will come equipped with slightly better battery life and a gorgeous 144hz display. There are two variants of the GF Katana Series, Katana GF66 and Katana GF76, namely 15.6 and 17.3″ versions respectively.

The GL Series Laptops from MSI is a mid-range powerhouse laptop. With a huge upgrade over the previous years’ GL65 Leopard, this year MSI gave the GL66 Pulse and GL76 Pulse an edge both in performance and aesthetics. Powered by the latest Intel Core i7 11th Generation H series Processors and will ship with RTX 3050Ti, RTX 3060 & RTX 3070. Design-wise, this year the laptop is going to be more sturdy and a cutting-edge futuristic design.

The top silver lid with the grey artwork looks stunning. The metallic MSI Logo adds a cherry on the top as well. This will make heads turn for sure. GL Series laptops are always known for their price to performance ratio and this laptop is no exception. Both of them will feature the Steelseries Per-Key RGB Backlit.
There are two variants of the GL Pulse Series, GL66 Pulse and GL76 Pulse, namely 15.6 and 17.3″ versions respectively.

MSI’s GP Leopard Series Laptops mean serious business & no nonsense. This year’s GP Leopard Laptops gets the same looks and aesthetics of the higher end GE Series Laptops except for the RGB Glass bar at the bottom. The display gets a huge upgrade over the last year’s GP75 Leopard’s 144hz to an either 1080p at 240hz or a 1440p at 165Hz display. So thats a huge improvement over last year.

Apart from the latest Generation Intel Core i7 Processor this Laptop will ship with either an RTX 3060 or an RTX 3070 Graphics Card variant. And from the GP Series onwards you will be having Killer ax Wi-Fi 6E for seamless internet connectivity and specially optimized for Online Gaming so that the maximum bandwidth goes into Online Gaming.
There are two variants of the GP Leopard Series, GP66 Pulse and GP76 Pulse, namely 15.6 and 17.3″ versions respectively.

GE Raider Series is one of the flagships of this year’s MSI new Laptop range. A fully power-packed machine with all the latest and highest-end specs crammed into that portable beast. It’s powered by the Intel Core i9 11th Generation processor and will ship in either RTX 3070 or RTX 3080. The main striking feature of this laptop is the RGB Glass bar at the bottom which can be controlled via MSI Mystic Light software. It can be synced with other peripherals also. With a whopping 99.9 W/hr battery, this laptop will run when other laptops will be dead within the first 45 minutes. This laptop will also come shipped with 4 different display variants like 4k at 60Hz, 1440p at 240Hz, 1440p at 165Hz, and 1080p at 300Hz.

The GS66 Stealth belongs to the top tier level of laptops. It is one of those laptops which balances power and portability at the same time. The MSI new GS66 Stealth Laptop has a full aluminum chassis build with a gorgeous True Color Display. Comes in a full black matte finish with the glossy MSI logo and the dragon. It is lightweight and has a whopping 99.9 W/hr battery. The Steelseries keycaps are made of aluminum as well and it feels extremely sturdy while typing. The silky-smooth glass touchpad is one of the best in the market.

The Cooler deserves special attention, as there are 3 fans present in this tiny little chassis. Those three fans push all the heat away from the system thus reducing the chances of thermal throttling. The MSI GS66 is one of those laptops that you can take it out on a conference or business meeting as well as play the highest-end games that are available right now. It will come shipped with the latest Intel Core i9 11th Gen Processors and with 3070 or 3080 Graphics Cards. Also, GS Series laptops are known to be the fastest yet the lightest Gaming laptops of all time. Also comes with Thunderbolt 4.0 Connectivity and it comes with a whopping 1080p 300Hz Display or 4k 120Hz display.

The Taiwanese brand not only catered to Gamers around the world but also to the Content creators as well. Content Creation Laptops from MSI boasts a good balance of performance and portability with additional features like True Color Display, MSI’s very own Creator Centre which boosts the performance and optimizes all the Creator Apps. The Creator laptops are performance-wise are at par with the Gaming laptops. But with a much better display quality, build quality and optimized to run softwares better.

So the only Creator Laptop that MSI launched this year is the Creator Z16.

The all new MSI Creator Z16 is a content creation laptop mainly geared towards Content Creators. The main attraction of the Z16 is the 16″ Display. This is quite unusual over a traditional 15.6″ version. The 16″ Display features a 16:10 aspect ratio and its a QHD+ Display with a resolution of 2560×1600 which runs at 120Hz with full 100% sRGB with a finger touch panel. This laptops are powered by the latest generation Intel Core i9 11th Gen Processors with 32GB RAM. It will come shipped with an RTX 3060 Graphics Card. Thunderbolt, Gen4 SSD and Killer WiFi 6E makes this laptop a fantastic choice for all content creators. And yes, this laptop comes with Windows 10 Pro.

We are totally blown away with new lineup of MSI Laptops launched at MSIology and we cant wait to get our hands on one of those. All the laptops will come equipped with Gaming features and Steelseries Gaming Keyboards. The Content Creation series is one of the best we have seen among all the creator laptops we have seen or reviewed earlier.

Lets see when these laptops fill up the shelves.