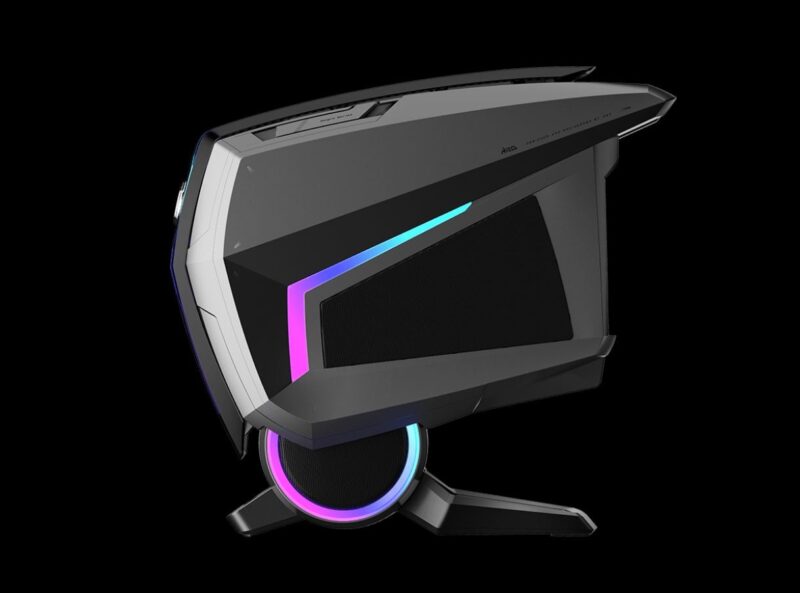 Some gamers like to assemble their own gaming PC with different components while some don’t want to go into the hassle of building a gaming PC, so they opt for a Prebuilt Gaming PC. And with this MSI is very popular and is one of the best Pre-built PC builders in the world right now.

Recently MSI has released their latest Prebuilt Gaming PC at CES 2022 called the MSI MEG Aegis Ti5. It comes with the latest Generation Intel Alder Lake i9-12900k paired with one of the flagship graphics cards, the Nvidia RTX 3090. This beast promises to deliver the ultimate 8k performance without any compromise.

The MSI Aegis Prebuilt Gaming PC will be available globally with various offline Retailers and with Online retailers like Amazon. The MEG Aegis Ti5 is priced at around £5,999.  But the price of the Aegis may vary from one region to another.

MSI manufactured their new Ti5 case to look more like a racing motorcycle engine. The cabinet features a stylish design along with customizable RGB lights. Its ergonomic body is made with strong and hard aluminum alloy, capable of withstanding shocks and vibrations.

It has also been constructed with an exclusive headset hanging cradle which looks like a fighter jet wing. MEG Aegis Ti5 has a dedicated liquid chamber for the liquid-cooled CPU. This pre-built gaming case weighs just around 21.55KG with all components installed and features 67 liters of total space.

The case features a Gaming dial which is mounted on the front. it is basically an LCD screened knob that can do specific tasks like volume control, light control, power cycle profile toggling, displaying the CPU stats, etc.

This MSI Aegis Prebuilt Gaming PC also features an integrated aluminum alloy handle which would enable gamers to carry this system to their LAN Parties!

The MSI Aegis T5 2022 features a plethora of ports on the front which includes the headphone, microphone separate jacks, 2x USB 3.2 ports, and one USB Type C Port.

MSI has squeezed the Latest Zen Z690 chipset motherboard in this. This latest-gen motherboard can support both the latest high-end Intel CPU and GPU.

Along with CPU and GPU, this motherboard is capable of handling the latest-gen DDR5 ram and PCIe express 5.0 technology. The motherboard is constructed with military-grade hardware and features a high-speed Intel Killer WiFi 6E and Bluetooth 5.2 wireless components.

The latest version of MSI Ti5 comes with a 240mm MSI Liquid CPU cooler with two 120mm fans. The MSI cooling module is silent and works great in gaming mode. It keeps the CPU around 56 degrees celsius in heavy gaming mode.

Along with a dedicated CPU cooler, it comes with pre-installed MEG case fans and individual heat sink chambers. These case fans are fast, but a little bit loud. The heat sink chambers and fans keep the inner temperature around 37-43 degrees celsius and keep the airflow of the system consistent.

Although it does not comes with a dedicated Liquid GPU Cooler but the temperatures remained fine when we tested some games with ultra settings as the temperatures didn’t cross 68-degree celsius. The open-air design actually helps a lot in cooling as we haven’t had a single issue with thermal throttling while testing.

The most impressive thing about this Aegis Prebuilt gaming is that it comes with two massive strong components. MSI has manufactured this beast with Intel’s Latest Gen Alder Lake Core-i9 12900k and Nvidia’s latest Gen RTX 3090.

Both of them are very much sturdy to handle any kind of heavy multitasking along with modern ultra-high graphics gaming. We did some tests with CPU and GPU separately and here are the results below

Can I upgrade my MSI MEG Ti5 components?

The MSI MEG Ti5 comes with all the latest Gen top-tier configurations. Although MSI offers you to fully customize and upgrade this MEG’s storage, processor, Graphics cards, memory, and other components.

How much Warranty does MSI provide for their latest Aegis Ti5?

What is the free software that comes with Aegis Ti5?

This MSI prebuilt strong Gaming PC comes with a free copy of Windows 11. Apart from that, you will have all the MSI software installed like the MSI Dragon Center from where you can monitor all your laptop’s metrics like temperature, storage, clock speeds, etc. You can also customize your RGB settings using this software.

These types of Pre-built gaming PCs are made for a Drawing room Gaming setup and can be a good console replacement. You can connect the MEG Aegis Ti5 with a good monitor and you can sit on the couch and enjoy your gaming sessions. You can check out these accessories if you want to go full wireless!

The system is very much capable of running all your games at max settings even on 8K and will be a terrific option if you want to do Video editing and 3D rendering.

MSI MEG Aegis is a sturdy 8k gaming PC with all the latest Gen components. It’s an absolute beast when it comes to aesthetics and performance. It features a strong Aluminium body making it an absolute shockproof body. It is the first prebuilt PC of 2022 with an RTX 3090 Graphics card.