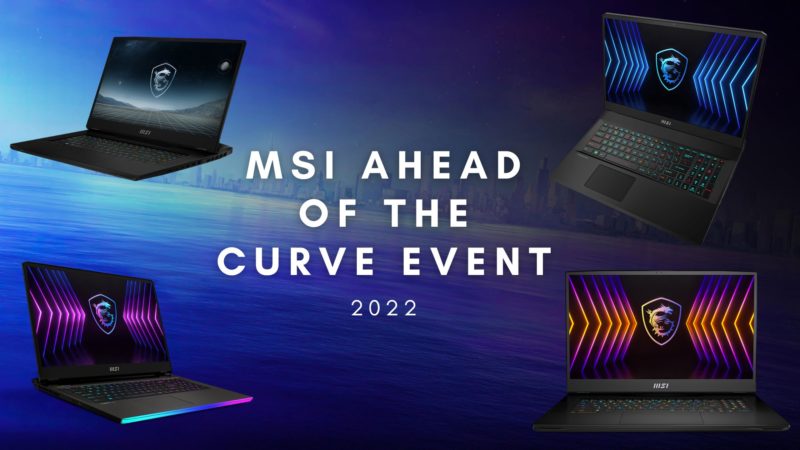 Recently MSI launched their all-new flagship HX gaming laptops at their “MSIology – Ahead of the Curve” Laptop Launch Event. This is the third time this year that MSI is launching new products. At the beginning of the year, at CES 2022, MSI launched a handful of MSI Gaming Laptops. A few weeks post-CES 2022 event, they held another event where they launched their entire MSI Business and Content Creation Laptops lineup.

MSI’s new HX series of Gaming Laptops features the 12th Gen Intel HX Series Processors. MSI claims that these processors provide a 100% performance boost over the previous models and a fantastic cooling system. The MSI Exclusive boost technology pushes the CPU and the GPU to the maximum limits, thus combining a total power of 250W, which gives you the fastest, most immersive and premium gaming experience.

The new laptops would also feature the latest 240Hz QHD OLED Display. MSI did a great job of including this Samsung’s OLED panel with the laptop as it serves as a perfect balance for those who want to do gaming and create content on a single laptop. The display features a very low response time and a wide colour gamut accompanied by a very high contrast ratio. The MSI Gaming and Creator laptops show True Pixel technology, a factory-calibrated display that promises the most accurate representation of colours.

MSI brings back their traditional Cherry MX Mechanical keys on these laptops and features longer key travels and Per-Key RGB Lighting. The keyboard has its own Steelseries Software and certainly raised the bars for Gaming Laptop Keyboards. The laptops are Meta Ready Certified, and you can also try out the Metaverse by using the Animaze software exclusively bundled with the Gaming Laptops.

So without further delay, let’s check out the all-new MSI HX Gaming Laptops.

The MSI Titan is the flagship MSI Gaming laptop, and it has been awarded the Gold Choice of the Best Of Computex Award. The new GT77 Titan Gaming Laptop takes the performance and cooling to the next level. The features incorporated inside the laptop like the RGB Lightbar, Mechanical Red Ultra Low profile Switches and one of the best displays they could find.

The laptop is powered by a 16-core Intel Core i9 Processor. The cooling is taken care of by four fans and seven heat pipes. The maximum turbo power requirement for the GT77 is 150W, but when pushed to its limits, the CPU and GPU combined can eat up to 250W of power when using the MSI Exclusive Overboost Technology. It also features desktop-level upgradability featuring 4 RAM slots, 4 M.2 Slots while supporting up to 128GB DDR5 RAM and 32TB of disk storage.

The GT77 Titan features an Nvidia RTX 3080Ti Graphics card which is currently the flagship and the fastest laptop GPU. We have earlier seen the Titan Laptops from MSI, but the new design involves a 23mm thin, lightweight chassis so that portability won’t be an issue. It sure is a desktop replacement for gamers who are always on the go.

MSI Raider is the smaller brother of the MSI GT77 Gaming Laptop. The MSI Raider gaming laptops are for those who want to get the flagship performance but don’t have the budget. So for them, the GE77 HX and the GE67 HX laptops came into existence.

These laptops feature the same 16 Core Processor and the RTX 3080Ti graphics card but miss out on many handy features with the GT77 Titan. This laptop also features the world’s first QHD OLED 240Hz display and a very low 0.2ms Response time with a 1000000:1 Contrast ratio. It’s an excellent laptop for both gamers and content creators. The GE76HX is a 17.3-inch version, while the Raider GE67HX is the 15.6 version of the laptop.

The new MSI Vector HX Gaming Laptops is a slightly cut-down version of the Raider Gaming Laptops. These Laptops also feature the same HX CPU and all the MSI boosting features. The Cooler Boost 5 technology is excellent for keeping the temperatures down when gaming at very high resolutions.

The Vector laptops don’t feature an OLED Display but come with the Steelseries Per-Key RGB Gaming Keyboard. The laptop is priced almost 40% lower than the Raider but performs more or less the same. It doesn’t feature the RGB bars and other aesthetic features that the GT and the GE Series enjoy but gets your heaviest work done in minutes.

The new MSI Creator Pro X17 Laptop is mainly aimed toward content creators. It features everything you would need, like a fully colour calibrated display and all the ISV Certifications paired with very security. The laptop also features a 16-core Intel Processor and the Nvidia RTX A5500 Graphics Card.

This is the world’s first laptop with built-in colour calibration report generators and contains all the important values like the Delta E, Gamma Values, etc. You can tweak your display settings according to your need. The CPU and GPU’s performance in content creation applications are highly efficient and incredible.

The laptop is certified by Adobe and Autodesk and assures system stability even during higher workloads. There is a built-in TPM module that helps you secure all your data. It is the best mobile workstation built for professionals and content creators who are always on the go.

So this was all about the all-new MSI HX Laptops. If you feel we have missed out on anything, let us know in the comments below.