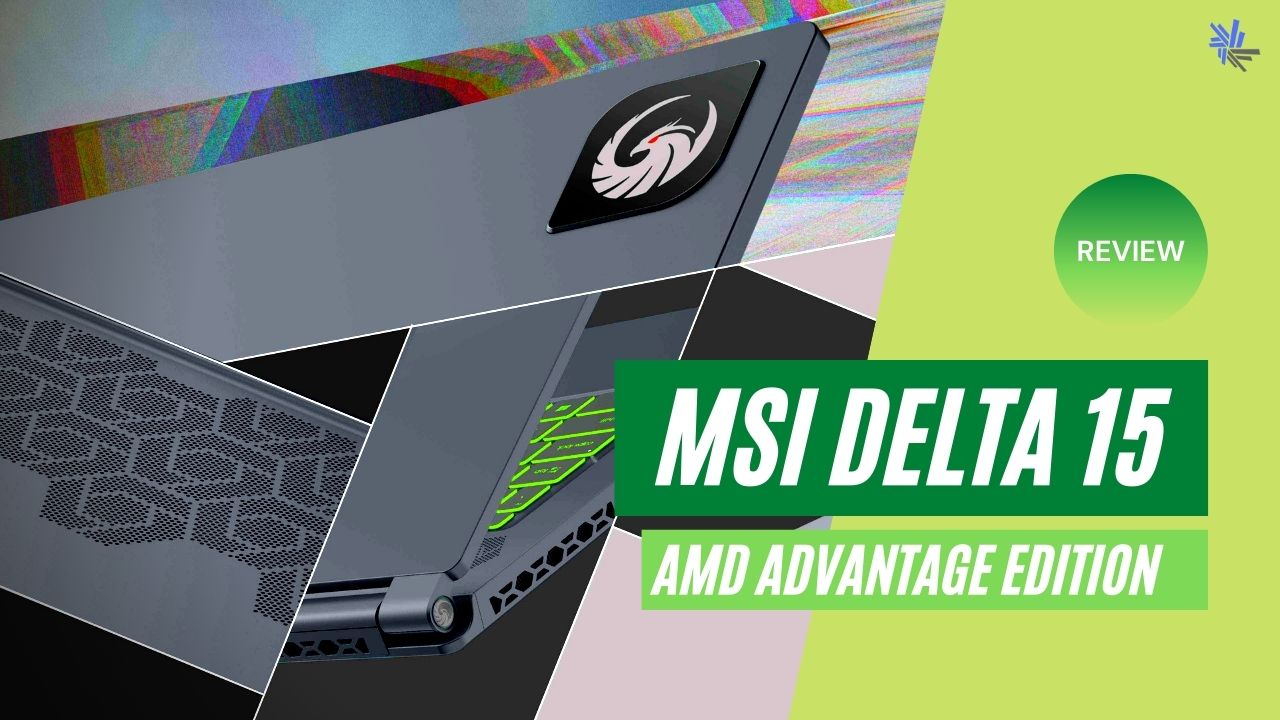 The MSI Delta 15 Advantage Edition is powered by the top-of-the-line latest generation AMD Ryzen Processor paired with the Radeon RX 6000 Series Graphics cards. So is it worth it? Let’s check it out!

MSI recently announced their all-new AMD-powered gaming laptops. MSI was initially partnered up only with Intel, but we see MSI shifting its interest in the AMD Gaming Laptops in recent years. As AMD gives a better price to performance ratio, they partnered up with AMD also 2 years back when they came up with Alpha 15 with the Ryzen 7 3000 Series processors. Jump skip to the present day scenario; we have recently seen the launch of new AMD 5000 Notebook Chips along with a plethora of features with the all-new RX 6000 Series Graphic Cards for laptops as well. The MSI Delta 15 is one of the sleekiest and the best performing Gaming Laptops with flagship specifications in their AMD Gaming Laptop lineup.

It is scheduled to release in the United States within this Summer. However, we haven’t announced the exact launch date and the pricing information. But from the speculations, it is pretty evident that the laptop might be available by August. For the pricing, if we consider the latest MSI Bravo 15 Gaming Laptop, it is sold at $899. So we are speculating that the MSI Delta 15 AMD Advantage edition will be priced at around $1000-$1200. We will update the pricing and the exact release date once we get some official news from MSI.

The MSI Delta 15 AMD Advantage edition design is based on a modern approach and feel. However, we have seen a very similar design from the previous generation Stealth Series laptops. The MSI Delta 15 is the thinnest and the lightest AMD Gaming laptop. With only 19mm of thickness and weighing around 1.9kgs, this laptop will serve as the smallest but one of the fastest portable machines from the Red team.

The MSI Delta 15 features a grey carbon sandblasted textured body. It also features an aluminum body with the Delta logo present on the top right-hand corner of the lid. The logo is glossy and looks and feels more like an elevated badge attached to the surface. Some of you may prefer the branding in the middle, but for us, this slight aesthetic modification represents the authentic taste of design for the gamers. Opening up the lid, we can see thin bezels on all three sides of the laptop except for the bottom frame, which is thick and with the MSI logo inscribed on it. The design does feel very durable and sturdy, and it reminds us of the last generation premium GS65 Stealth Series of gaming laptops with a similar plan and build.

The MSI Delta 15 features a 15.6 inch IPS Display. There are two variants of this laptop. One comes with the 144hz panel, while the other comes with the 240Hz Refresh Rate Display. We are yet to find out more about the color accuracy and the NTSC and sRGB values, and we will update more on those aspects on this blog once we physically receive the MSI Delta 15 A5EFK model with us.

From our point of view, we are speculating MSI will be offering their patent Tue Color display which has a color calibration of 100%sRGB but hasn’t got any confirmation from MSI yet on this point. MSI’s patent, Matrix Display, is supported by the MSI Delta 15, which means you can connect two monitors and have a surround wide view experience.

MSI Delta 15 features an RGB Keyboard from Steelseries. MSI has always been the best when it comes to its keyboard spacing and key travel. The RGB key backlighting can be controlled via the Mystic Light from the MSI Center to match your work and gaming style. MSI didn’t include a full-size keyboard, unlike their other newer generation laptops like the Katana or the Sword Series GF Series models, which now come with a full-sized keyboard. Read more about MSI GF66 Katana and the MSI Sword White Gaming Laptop.

The Trackpad on the MSI Delta 15 Gaming Laptop is smooth and very responsive. It will track all the movements efficiently and respond well to Windows hello Gestures like the Pinch to Zoom, Double finger support for scrolling. The trackpad doesn’t have any dedicated mouse buttons. All the buttons are present underneath the trackpad.

MSI is always known for delivering a plethora of ports for different USB types and keeping the standard port structure the same. On the right side of the laptop, we will find an HDMI 2.1 Port which will support 4K at 60Hz, a USB 3.1 Gen2 Port, and a USB Type C port which acts like a Display port as well if you want to hook up an external high refresh rate monitor. We will have one USB 3.1 Gen 2 Port, one USB Type C Port and one Audio/Microphone Combo Jack, and one Charging port on the left side.

For the Wireless connectivity side of things, this is where things get interesting. MSI featured the WiFi 6E for an extraordinary Wireless Experience. The new WiFi 6E promises to deliver excellent speed while keeping the network smooth even when the Wifi is shared with several other users. Even with an h of Internet usage while gaming, WiFi 6E will keep the network performance stable without any latency issues. The new Bluetooth 5.2 facilitates seamless file transfer and connects your Bluetooth audio devices instantly with your Laptop.

The laptop also features a 720p HD Webcam for all your online classes and Zoom or Microsoft Teams meeting. This is not an IR Camera, and features like Windows Hello might be missing from this laptop. Kudos to MSI managed to cram in the 720p webcam inside those tiny thin bezels, whereas ASUS ROG Laptops completely omit the Webcam from their Gaming laptops.

As seen from the previous generation MSI GS65 Stealth Laptop series, which had their speakers lined up on the top of the laptop deck, which surprisingly produced good quality audio, the MSI Delta 15 went precisely that way. It included the speakers on the top of the laptop. From the previous experience, you might miss out on the bass thumps as the speakers are more on the treble side, but it should make up for the loudness and clarity they offer. The laptop also features lossless music and high premium quality sound with Hi-Res Audio. The Nahimic Audio by Steelseries would let you experience high-quality 3D surround audio when you are gaming.

The MSI Delta also features a large 82W/hr battery. The company claims that this laptop will give us a whopping 12-hour battery life. However, we are still yet to check that out. The new AMD 5000 series chips and the AMD Radeon RX 6000 Series Mobile Graphics should give us a better battery life than the previous AMD Gaming Laptops.

The MSI Delta 15 gaming laptop is powered by the latest AMD Ryzen 9 5900HX Processor. This laptop has 8 Cores and 16 threads, and it’s one of the fast processors on laptops right now. With a maximum boost Clock of 4.6Ghz, the AMD Ryzen 9 5900HX slashes anything thrown at it. The newer manufacturing process also helps in getting a better battery life and stability out of the laptop. They have paired up with the all-new AMD Radeon 6700M, which is more 1.5x faster than their previous generation AMD Graphics. The new GPU facilitates 1080p gaming at maximum settings. With 10GB Video memory, this laptop can handle the highest memory-demanding games at ease.

The 16GB 3200Mhz DDR4 Memory along with 1TB NVMe SSD makes this laptop one of the smoothest to operate and play your most favorite and demanding games on.

The thermals on the MSI Delta 15 are taken care of by MSI’s signature Cooler Boost 5 Thermal solution. The new redesigned cooling pipes have a more broadened internal diameter to facilitate more heat transfusion to reduce the core temperatures. There are a total of two fans and six heat pipes. The newer generation cooling system is highly efficient and ensures butter smooth gaming experience without any thermal throttling issues. There are radiators present on all four sides of the laptop to ensure easy airflow exhaust. The honeycomb vents present at the laptop’s bottom also help in the proper air intake to cool the internals.

MSI provides a copy of Windows 10 Home Edition with every laptop. The Windows 10 can later be upgraded to Windows 11 once Microsoft releases it. You will also find the MSI Center (Previously MSI Dragon Center), which helps you control and customize the laptop you want. You can monitor, adjust and optimize according to your needs. The new functions introduced in the latest version will feature the MSI Smart Image Finder, UI Skin Option, etc., to give your laptop a personal touch.

The MSI Delta 15 offers everything that a Gamer wants—starting from the top of the line AMD Ryzen 9 Processor and the latest Radeon RX 6700M Graphics Card with 10GB Video memory. The thermals are alot better than any other competitive brands in the market providing such a delicate and efficient cooling system with two fans and seven heat pipes. The portable design which is only 19mm slim and weighing on 1.9kgs, it is very easy to carry around and game anywhere you want. The large 82W/hr battery is enough to last a whole day without charging on a typical 10 hour working scenario and should still have some juice left.

The Gaming performance is incredible and 1080p and even 4K with Fidelity FX which massively boost the framerates. Overall, a solid laptop to go with if you are inclined to only go towards an AMD Advantage system. I will update more information on this Blog once the model is physically available with us! Stay tuned!

Learn more about the first AMD Advantage Laptop from MSI