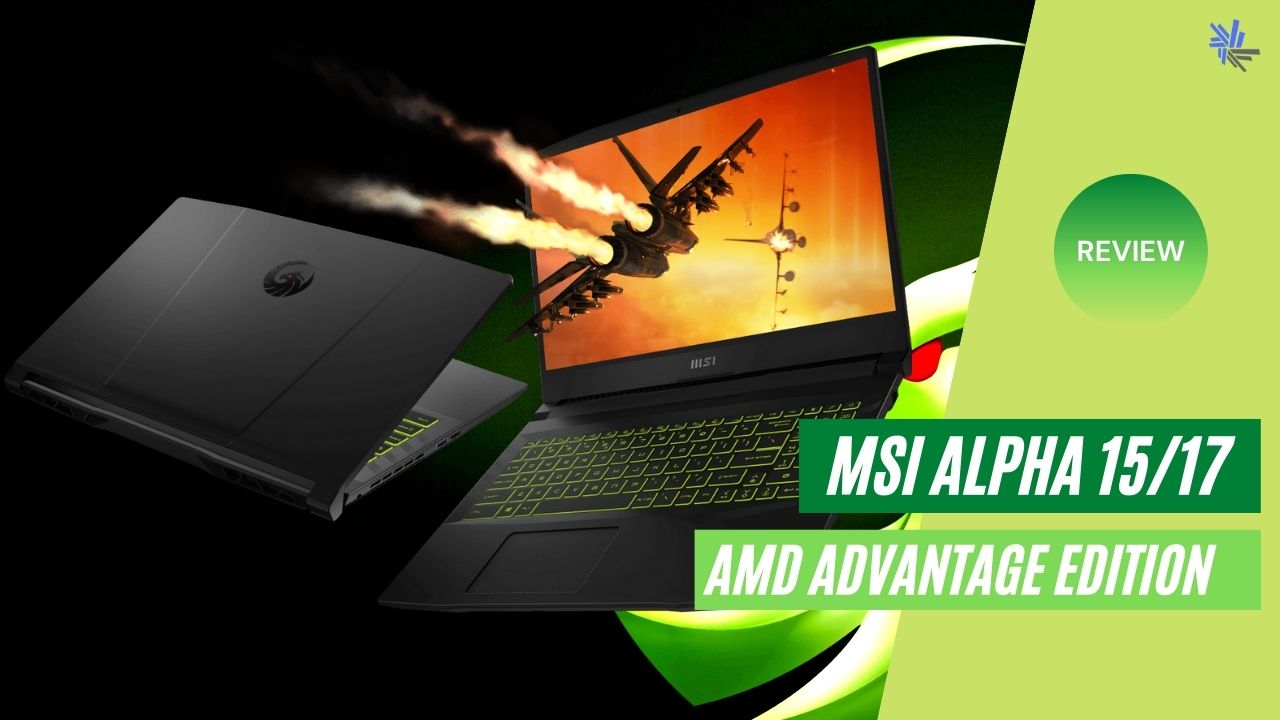 The MSI Alpha 15 is an AMD Advantage Edition Gaming Laptop featuring the all-new AMD Ryzen 7 5800H Mobile Processor and the new Radeon RX6600M Graphics Card along with a refreshed Chassis Design. Is it worth it? Let’s have a look!

Recently, MSI announced another AMD-powered Gaming laptop called the MSI Alpha 15, alongside the MSI Delta 15. The Alpha 15 from MSI is a newly designed all AMD-powered gaming laptop featuring the latest hardware equipped for gaming. We also had an all AMD Gaming laptop earlier known as the MSI Alpha 15 A3DDK two years back, which was equipped with an AMD Ryzen 7 3750H processor with a Radeon RX5500M 4GB Graphics Card and was pretty much suitable for the price and the performance that it offered back then and later on discontinued.

2021 has been a fantastic year for new Gaming hardware launches and announcements by different brands. As MSI announced their new lineup of gaming laptops, it’s pretty much evident that they are back in the game as 2020 was not a good year for the company. The MSI Alpha 15 is a smaller brother of the MSI Delta 15 but still managed to keep up with the power and horsepower you will need for Gaming in 2021.

So is it worth it? Let’s check it out then!

It is scheduled to release in August. However, we haven’t announced the exact launch date and the pricing information. But from the speculations, it is pretty evident that the laptop might be available by August. For the pricing, if we consider the latest MSI Bravo 15 Gaming Laptop, it is sold at $899. So we are speculating that the MSI Alpha 15 AMD Advantage Certified edition will be priced at around $1000. We will update the pricing and the exact release date once we get some official news from MSI.

The all-new MSI Alpha 15 has a brushed aluminum top finish. The lid has its distinct aggressive styling, and the two-body line bumps are very much recognizable from the previous generation Alpha 15 MSI Gaming Laptops. The lid has sharp-edged but rounded corners.

The laptop features a sleek design wrapped up entirely in a black metal chassis. The newly design chassis looks much different from the previous generation Alpha when it comes to the laptop’s deck. This time MSI didn’t go with the thick GL65 Design structure. Instead, they went with a much sleeker design with improved thermals and radiator design. The reflective black MSI Falcon logo with the red-eye looks stunning on the top of the lid. The four thick lines that emit from both sides of the keyboard on the laptop deck give this design an edge aesthetically.

The laptop has bezels on three sides except for the bottom frame where they branded their newly designed MSI logo. The deck of the laptop also feels sturdy. Weighing just around 2.3kgs, the new MSI Alpha 15 AMD Advantage Edition is sleek enough to fit into your backpack, and carrying around won’t be a hassle. A perfect choice for gamers who loves both sturdy and a low key style laptop!

The MSI Alpha 15 will be shipping with two different displays, the 15.6-inch, and the 17.3-inch. Both the displays will be identical except for the size. The Refresh rate of both displays will be not more than 144hz. We are yet to find out more about the color accuracy values and the NTSC and sRGB values, and we will update and cover more of these aspects on this blog once we physically receive the MSI Alpha 15 model with us. So stay tuned with us!

But as far as we think, these laptops will not feature the 100% sRGB display as the previous generation, MSI Alpha 15 A3DDK, didn’t display its color calibrated. This laptop supports Matrix display, which means you can connect two separate displays and run them all together for better productivity and workspace. Alternatively, you can also connect your 4K display on this screen.

The laptop also comes with AMD Freesync Premium, which is equipped with AMD Radeon Anti Lag Technology which significantly decreases the input lag, which is very helpful in competitive gaming scenarios. The Radeon Image Sharpening Technology also gives much more detail and sharpness to the in-game visuals.

The keyboard on MSI Gaming Laptops always caught our attention. MSI incorporated full-size gaming keyboards for most of their Gaming Laptop lineups now to facilitate more keybindings in-game. The keys feel really great to type on as they have a key travel of around 1.3mm, and the key spacing is an area where MSI shines. The RGB key backlighting can be controlled via the MSI Mystic Light software from the MSI Center. You can match your game and play styles with various colors from their palette. The keyboard layout feels more like the Katana GF66 or the Sword Series Models.

The Trackpad on the Alpha 15 Gaming Laptop is very smooth and responsive. It tracks all the movements efficiently and responds well to Windows hello Gestures like the Pinch to Zoom, Double finger support for scrolling, etc. The trackpad doesn’t have any dedicated mouse buttons to click as MSI placed those buttons underneath the trackpad.

For the connectivity side of things, on the right side of the laptop, you will find an HDMI 2.1 port that supports 4K 60Hz, a USB Type C port that acts like a Display port as well those who want to hook up a separate monitor for Matrix Display or a 144hz monitor for Gaming, a USB 3.2 Gen2 Port, a headphone/microphone jack and an RJ45 port for the ethernet cable. You will find a USB 2.0, USB 3.2 Port, and the Charging port on the laptop’s left side.

This laptop features the Gb LAN / 802.11ax Wi-Fi 6 for better internet connectivity on the wireless side of things. The Wifi 6 is also supposed to be 3 times faster than the WiFi 5. Bluetooth v5.1 is also present on this laptop for seamless file transfer.

The MSI Alpha 15 AMD Advantage Edition features a 720p Webcam for both video calling and streaming. The Webcam can still shoot pictures as well. There is no IR Camera, so features like face recognition are not available for this laptop.

The audio on the Alpha 15 AMD Gaming laptop is powered by two speakers, placed at the laptop’s bottom. With Hi-Res Audio, you can immerse yourself in lossless music and premium quality sound. Nahimic from SteelSeries can elevate your audio so that you can experience 3D Surround sound ingame.

The MSI Alpha 15 AMD Advantage Edition features a 53.6W/hr battery; you would expect 4-5 hours of Web browsing and 3-4 hours of video playback on it. The new AMD 5800H Processor and the AMD Radeon RX 6600 Mobile Graphics should give us a better battery life than the previous AMD Gaming Laptops.

The all-new MSI Alpha 15 Gaming laptop is powered by the latest generation AMD Ryzen 7 5800H Eight Core Sixteen Thread Processor. With a base clock of 3.2ghz and a maximum boost clock of 4.4Ghz, this processor is one of the best, and it even beats out the Intel competition in a lot of tests. The new Ryzen chips run cooler thanks to the 7nm FinFET manufacturing process. Pairing along with it is the new Radeon RX6600M 8GB Mobile Graphics Card. The new Radeon RX 6000 series is supposed to be 1.5x times faster than the previous generation GPUs. With the Radeon RX 6600M, gaming on 1080p resolutions would be a breeze. The 16GB 3200Mhz DDR4 RAM and 512GB NVMe SSD make this laptop one of the most budget-friendly performance-oriented laptops that will hit the market soon.

MSI’s revolutionary cooling solution, known as the Cooler Boost 5 Cooling solution, is one of the best in the market. For each dedicated GPU and CPU, there is a total of 6 heat pipes that carries away the heat from the internals. The newly designed heat pipes have their internal diameter more broadened to facilitate airflow and heat transfusion. This cooling system is extremely efficient and ensures butter smooth gaming experience without any thermal throttling issues. There are radiators present on all four sides of the laptop to ensure easy airflow exhaust. The honeycomb vents present at the laptop’s bottom also help in the proper air intake to cool the internals.

MSI provides a free copy of the Windows 10 Home Edition to purchase every MSI Gaming Laptop. Windows 10 can be upgraded to Windows 11 using the same license key, so you wouldn’t have to worry about the new Operating system release. Apart from this, you would also find the MSI Center, previously known as the MSI Dragon center, which helps you control and customize the laptop independently. You can monitor your system settings and optimize the laptop to provide a better gaming experience. The new functions included in the MSI center are MSI Smart Image Finder, UI Skin Option, etc.

The MSI Alpha 15 is an excellent laptop and completes all the desires of a Gamer. Starting with the AMD Ryzen 7 5800H processor, whose performance crushes the Intel i7. The all-new RX6600M is an 8GB Graphics card that can run almost all the games at its max settings. And because you are getting both an AMD processor and an AMD GPU, your laptop will have the AMD Advantage certification, which means you can enjoy all the AMD exclusive features of the AMD Smartshift, Fidelity FX, AMD Smart Access Technologies, etc.

The sleek and portable design would attract many gamers so that you can carry around your gaming laptop wherever you want. The battery might be a concern if you are continuously moving, but if that’s not the case, you don’t need to worry about it. Overall, a solid laptop to go with if you are inclined to only go towards an AMD Advantage system. I will update more information on this Blog once the model is physically available with us! Stay tuned!