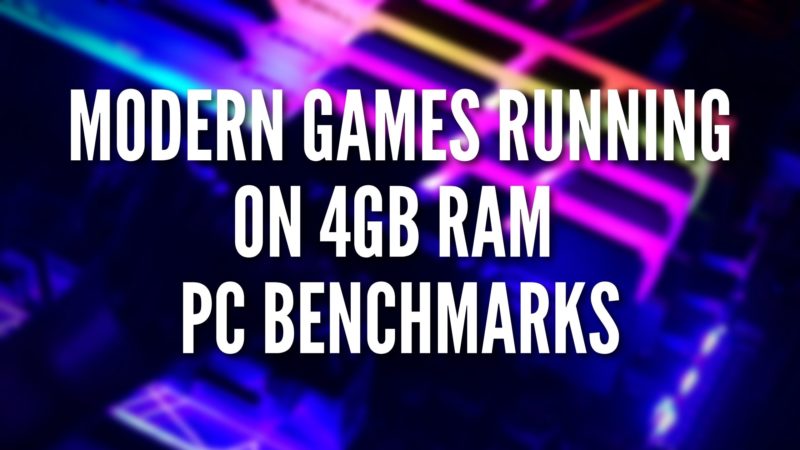 What will happen if you try running the latest modern Games on 4GB RAM? We ran some new titles on PC to record the 4GB RAM Gaming benchmark.

With the advancement of Gaming requirements, especially for PC, we had left the era when 2GB and 4GB RAM were enough for basic and advanced computing. Earlier, we could play games at high resolutions without lags and stutters, even with 2GB RAM.

But as time progressed, software and operating systems started demanding more out of the system, and that’s when we started seeing higher ram requirements. For example, with the shadow of Mordor in 2014, we noticed it needed around 6GB RAM, and that’s when it all started. Nowadays, its a very common to have 8GB and 16GB RAM. But we did an exciting test to see how newer games perform with 4GB RAM.

So without further delay, let’s check out the performance benchmarks of Modern Games on 4GB RAM in 2022 running on the PC platform.

Here is the test spect we are currently using to conduct the 4GB RAM Gaming Performance benchmarks.

With Full HD 1080p, here are the performance results that we have achieved with the latest games running on 4GB RAM.

From the benchmarks, we can see that Gaming on 4GB RAM is not worth it right now. Most games you will find nowadays require at least 8GB of RAM to run correctly. You need at least 8GB RAM to play games properly because the native Windows 11 Operating System and apps take up almost 70% of the RAM if you use a 4GB Stick.

As you can see, except Minecraft, all the other games are extremely laggy and stutter. For Example, GTA V runs smoothly even on the lowest-end Gaming systems with 8GB RAM. But as soon as we dropped the RAM from 8 to 4, we started noticing lags, stutters and, at times, crashing. This is the case with all the games that we have tested out.

So we would recommend you.

So this was all about the performance benchmarks of Modern Games on 4GB RAM in 2022 running on the PC platform. If you think we missed out on anything, let us know in the comments down below.