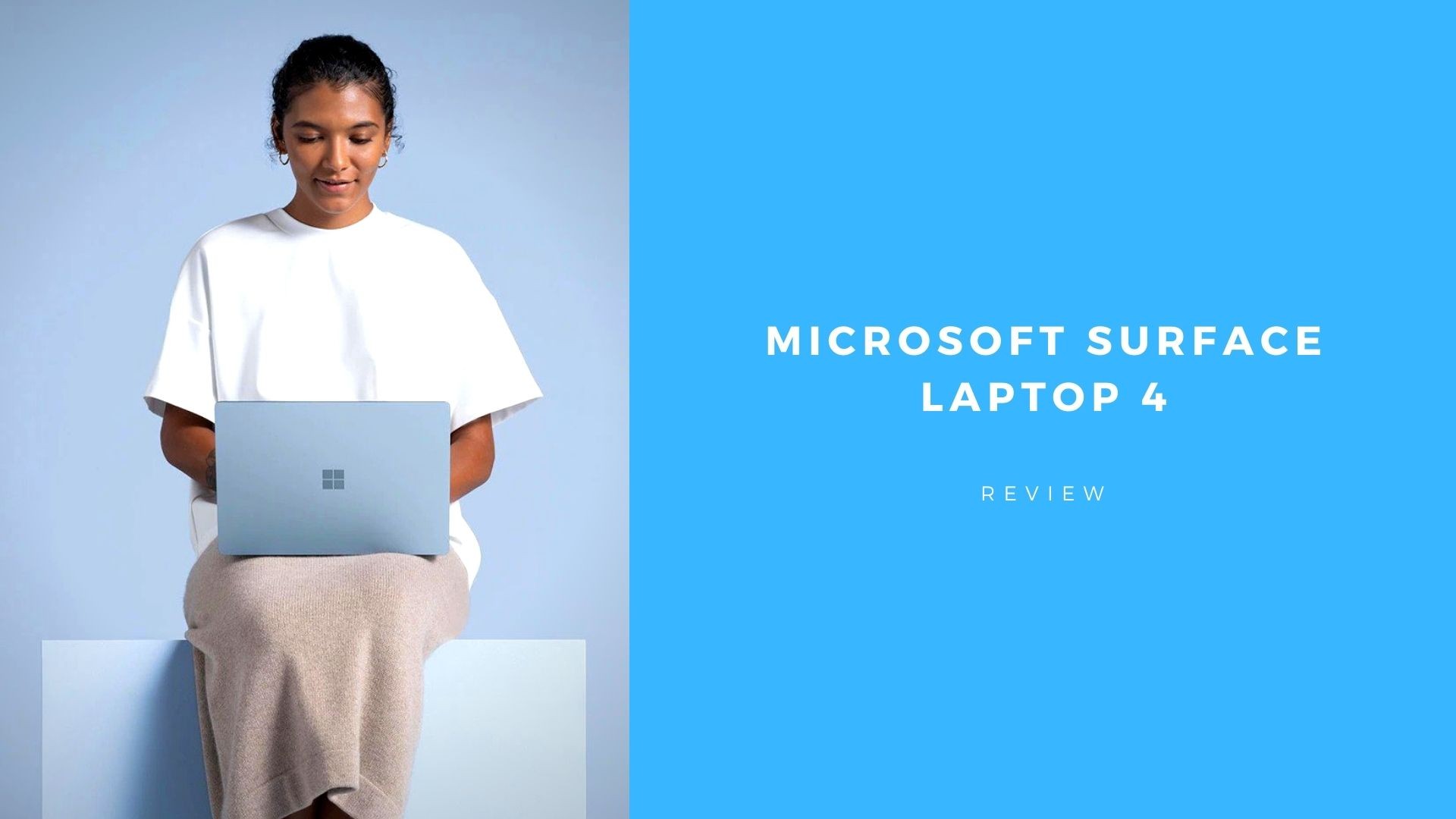 The Surface laptops from Microsoft provides an excellent value to the consumer as it serves for wide range of applications. Equipped mainly for business but it can be a great learning tool as well because of the vibrant touch screen displays. Microsoft Surface Laptop 4 is more of a refreshed version rather than a totally new product. With its improved research and development they have packed high end components into their same slim and lightweight chassis.

Surface Laptops are known for their incredibly thin form factor along with a big feather like touch screen and a durable body. There aren’t any fancy features that they tried to show off with their Microsoft Surface Laptop 4 release. But promised to provide more performance and durability along with a better experience than the previous generation Surface laptops.

It has already been two years since the Microsoft Surface Laptop 3 had launched but in 2020 and 2021 brands like Dell, Apple, ASUS and even MSI had shown huge improvements in reducing their laptop weight and size but at the same time packing high end components inside.

Here are the specifications of the Microsoft Surface Laptop 4

Unlike last generation Surface laptops, both of these laptops can be configured according to your choice of specifications but the higher end 15-inch ones will ship only with Intel Tiger Lake i5/i7 chips onboard.

The Microsoft Laptop Surface 4 looks more or less exactly like the last generation devices. There is nothing much to the design side of it apart from some areas although we would love to see a new big change in the Surface laptop’s design. Surface laptops offers the sleek clean design and the this is no different. Looks wise it is as same as the previous generation Surface 3 Laptops.

But what we think is the design can be made a little more slimmer as there are more slimmer options available in the market like the Apple M1 Macbook Air or the Dell XPS 13 which weighs the same as this laptop 2.8 pounds but slightly smaller than the Surface Laptop 4 dimension wise. But it wont be an issue at all because it is thin enough to slide into briefcase or a backpack easily and the new Alcantara deck is sturdy and comfortable for the wrist to type.

The glossy black Microsoft logo on the metal lid looks classy and eye catching as it offers the premium look to it.

The aspect ratio of the Microsoft Surface Laptop 4 is 3:2 and is good for productivity rather than a traditional 16:9 for laptops. Productivity mode means this laptop has its own flares when you are doing a lot of editing, reading, typing and that is where the 3:2 aspect ratio has the advantage of that extra vertical space which is only possible with these kind of aspect ratios.

The thick bezels on the laptop might be a big let down for some users as like the previous generation Surface laptops, this laptop also has the issue of having thick bezels which largely impact the viewing experience of the laptop.

Switching this to an entertainment device, we were a little bit dissapointed with the colors. Some of the colors very vibrant and some looked dull. In the brighter scenes the colors looked perfect but in darker scenes it is difficult to make out the details.

Being a touchscreen, this display is very much reflective even if the brightness is cranked up to the top. It is definitely not an issue when using indoors but using it outdoors under direct sunlight might give you some issues. The maximum display brightness it can hit is 350nits and that’s way behind the Dell XPS 13 which is 470nits.

Microsoft kept the port selection pretty much the same with no Thunderbolt 4 on this laptop. On the right side of the laptop you will be getting the Surface connector for charging. On the left side of the Surface laptop 4 there is a USB-Type C Port and a USB Type A Port and a Headphone/Microphone jack.

The inclusion of USB Type A Port was necessary as most of the devices still opt for these kinds of connectors rather than Type C. The Type C Port on the other hand dosent support Thunderbolt so hooking up with an external Graphics Card will be a problem. Although a Micro SD card reader would have been a great inclusion.

The Microsoft Surface Laptop 4 will come equipped with either Intel or AMD Processors. The lower end 13.5″ ones will be coming equipped with the AMD Ryzen 5 or AMD Ryzen 7 variants. These laptops will also come with both Intel i5 and i7 Tiger Lake Variants.

Obviously this laptop wont be able to run Assassins Creed Valhalla at 60FPS all settings maxed out but it can pretty much handle any daily tasks that you throw at it. You can open more than 18+ Tabs on your Chrome browser along with a YouTube video streaming and listening to music alongside working on excel or word. The i7 variant with 16GB RAM packs a lot of power than you can imagine.

This laptop scored around 4835 in Geek Bench 5 which is very good but it does lag slightly behind the XPS 13 which scored around 5300 in the same tests. But you will not be able to notice the difference between these two in your daily use.

Can you use this for Video Editing and converting? Yes absolutely. You can convert 4k videos to a 1080p within 17minutes using Handbrake which is really fast compared to the competitors. You can edit videos and photos using Photoshop and Premiere pro on this device as well.

For Gaming, yes you can run older games on it at decent framerates. Even games like Counter Strike GO is very much playable on this device at good frame rates. You can enjoy older games like the Hitman series, Mafia, older need for speed games or basically any game which is not graphically heavy. Newer games like Among us or Sid Meier’s Civilization VI – Gathering Storm can be played on this laptop with ease.

The Microsoft Surface Laptop keyboards are by far one of the best keyboard that you have typed onto. All because of the large sized keys and the full Alcantara material wrapped around the keyboard (metal for 15-inch variants). The keys have a 1.3mm travel and it feels like typing on a mechanical keyboard. The spacing between the keys also help mis-typing bottom keys when typing quickly.

The Glass touch pad is around 4.5×3 inches and it is extremely comfortable to use. It is very smooth and responsive with no issues using Windows gestures commands like pinch to zoom.

The Surface Laptop 4 Webcam is a 720p which does capture clear images and videos. It is perfect for video calling and taking some laptop selfies. We expected a 1080p Full HD camera but this type we have to stick with 720p only. Zoom meetings, Google Meet can run flawlessly on this system.

The Microsoft Surface 4 Laptop features the Dolby Atmos sound technology with its Omnisonic speakers. Microsoft claims that this speakers will deliver a richer and accurate sound by pumping the music from beneath the keyboard and bouncing it off screen.

The Surface Laptop 4 Speakers produces a crystal clear and loud but clean audio and it can be a delight who loves to listen to music while working.

Microsoft claims that these Surface Laptops can run upto 17 hours. But it will vary depending on the variants. In our tests, the Surface Laptop 4 lasted more than 11 hours of charge while working and websurfing. That is more than enough for an average working person who will be using the laptop for 9-10 hours at work and still having some amount of juice left for entertainment at the end of the day.

This laptop is not equipped to handle high end tasks and rendering. It is mainly to be used as a daily driver for productivity and entertainment. For these purposes, ninety percent of the time the Surface Laptop 4 was quiet. Until we ran some games on it, that when the fans kicked it but there wasn’t any issues with thermal throttling. The bottom becomes warm while gaming but in normal scenarios it runs extremely cool and quiet.

Over the last generation’s model, this year’s Microsoft Surface Laptop 4 is a major upgrade in terms of raw performance and power but keeping the same design from the previous release. But it is still a beautiful, ultraportable lightweight chassis that you can carry around anywhere.

Thank you for reading till the end
Until next time…