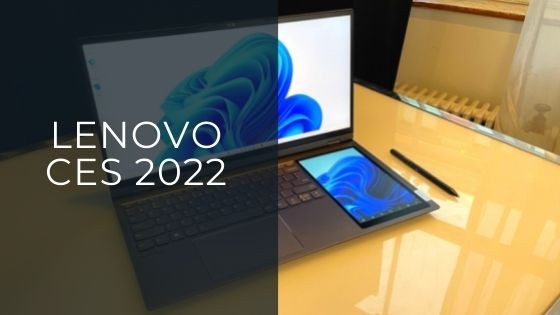 Lenovo remains to be the best when it comes to performance and price. Lenovo bought a basket full of laptops for us in 2022 ranging from the lowest to the highest end. These Lenovo Laptops 2022 comes packed with top-of-line specifications and features!

Since the three major chip manufacturers are bringing in their new lineup of processors and graphics cards. It’s time for the laptop brands also to step and refresh their laptops with the latest hardware. CES 2022 exceeded our expectations. Laptop brands that came into play this year bought in a handful of new interesting devices rather than just the traditional clamshell laptops with slightly upgraded hardware.

Lenovo also bought in a handful of laptops this year and we are extremely excited to see how much the brand has progressed over the previous years both in terms of Performance and Quality. This best Lenovo Laptops 2022 list will feature all the laptops released at CES 2022.

The most innovative Lenovo Laptop in 2022 is the Lenovo Think book Plus. This is a 17-inch laptop that features a 21:10 aspect ratio. Lenovo normally keeps its business-class laptops buttoned but this year with the Think book Plus they went out and redesigned a completely newer-looking Thinkpad which has an 8-inch tablet positioned vertically to the right side of the keyboard.

This isn’t the first time we are seeing a dual-display laptop but we didn’t expect Lenovo to come out with such a design.

The Z Series Laptops is AMD Exclusive only.

The X1 in recent years was tied up to be an Intel exclusive. But this year with the Z1 Series they went full AMD. The major reason behind this is AMD’s leading performance in multithreaded applications. The inclusion of the large 120mm haptic force pad works seamlessly without a hitch. It also comes with Windows 11 out of the box.

The Lenovo Thinkpad Z13 will be available from May 2022 and will be priced at around $1549. Meanwhile, the higher specced Thinkpad Z16 will also be available at the same time but with a starting price of $2099.

The Yoga Lineup from Lenovo is one of the most popular product lines from Lenovo.

The Yoga 6 13 laptop has a 13 FHD display with a simple and portable design.

The all-new Lenovo Yoga 9i G7 features a 14 inch 16:10 4K OLED display. It’s an extremely beautiful display with true blacks and VESA Certified DisplayHDR True Black 500 Certification and Dolby Vision. This latest Lenovo laptop in 2022 is powered by an Intel 12th Gen i7-1260P Processor. It has up to 1TB of storage and is available in both 8GB and 16GB RAM variants.

The Bowers and Wilkins speakers system is optimized by Dolby Atmos so that you can immerse yourself in a spatial audio experience. The Yoga 9i is very sleek and features a very appealing design. The laptop is lightweight and extremely portable and the newly designed chassis is worth checking out.

The all-new Lenovo Gaming Laptop Legion 5i Pro Gen 7 features a 16-inch display with an aspect ratio of 16:10. This is the world’s first 16-inch WQHD+ Display with a refresh rate of up to 240Hz.

The Lenovo exclusive AI engine automatically detects and optimizes your in-game performance automatically. The Legion Coldfront 4.0 Thermal technology ensures that even if you are overclocking your laptop, you will not run the risk of overheating it.

All these 4 laptops are getting the latest Intel Core 12th Generation processors and with RAM capacity of up to 32GB and up to 2TB of internal storage. It is to note here that the Think book Plus Gen3 only gets up to 1TB of Internal Storage. The main difference between all the laptops is the size.

Taking to the hardcore business side of things, Lenovo bought us the Thinkpad X1 Laptop as well. Their new lineup in 202 features new options as well. There are three new Thinkpad models to be specific for 2022. Let’s start with the first laptop, Thinkpad X1 Carbon Gen 10.

This laptop features the same old classic design with Intel 12th Generation Core i7 Processors and is paired alongside up to 32GB RAM and 2TB Internal Storage. The all-new 14-inch OLED Panel comes with the Thinkpad X1 Carbon with a 2.8K resolution.

Next is the Lenovo Thinkpad X1 Nano Gen 2 which is made to be extremely lightweight and portable as its name suggests. This new laptop features the Intel Core i7 vPro Processors and can support up to 32GB of RAM. This is a smaller 13-inch display with a 16:10 aspect Ratio with a 2K resolution.

Finally, the all-new Lenovo ThinkPad X1 Yoga Gen 7, is a 2-in-1 laptop with a gorgeous OLED touch display. IT is powered by the latest 12-generation Intel Core i7 vPro U and P series processors with support of up to 32GB of RAM. It has a maximum storage capacity of 2TB. The laptop features a 14-inch display with up to a 2840 x 2400 resolution and supports Dolby Vision. This laptop is one of the best Lenovo laptops for business.

So this was all about the latest and best Lenovo laptops released in CES 2022!