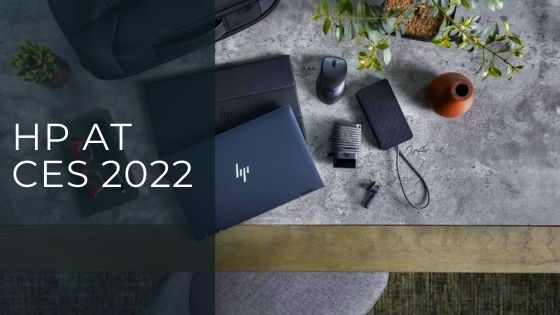 HP revamps their entire business lineup with Powerful refreshed hardware and sleek design! These are the best and latest HP Laptops in 2022.

This year CES 2022 bought us a lot of surprises. After all the events were canceled due to the reawakening of the Coronavirus Pandemic and the Omicron virus still looming at large, we finally get to see the Consumer Electronics Show 2022 happening. Even though there are some companies that are attending virtually and HP is one of them, there are a lot of products that are yet to be announced.

Since both AMD and Intel have released their latest chips, 2022 would be a great year for laptops. In this world of hybrid workspaces and hybrid laptops, the devices that we use should be productive in all situations and scenarios. This means better optimization, better performance, better thermals, and overall a better device.

This year at CES 2022 HP has targeted the hybrid market with a new lineup of laptops ranging from consumer laptops to ultraportable premium laptops.

HP showcased the newly designed and revamped look of the HP Elite Dragonfly G3 Laptop. This is an enterprise-based laptop and this year this laptop promises refreshing looks and elite performance out of the box. HP added a lot in the latest version of the Elite Dragonfly Series laptop as compared to its predecessor G2 Model which was then considered as the best laptop for mobile professions. The newer Dragonfly G3 has a clamshell design rather than the last year’s 360 degrees convertible.

HP incorporated all the necessary ports like two USB Type C Ports/ Thunderbolt 4 Ports, one USB 3.1 port, an HDMI 2.0 Connector, a headphone microphone combo jack, a Nano Sim Slot (depends upon the variant). Its sleek, robust and has undergone several durability tests like the MIL-Standard-810H. It has scheduled to release in the market by May 2022 and would be priced at around £1,599.

HP also added the Chrome OS to their Elite Dragonfly Series. The Elite Dragonfly from HP always comes in both Standard and Premium (Enterprise) versions. These laptops are 360-degree convertible laptops with a display size of 13.5-inches with an aspect ratio of 3:2.

The highest-end laptop features a QHD+ (22563×1504) Touchscreen display and you can also charge your pen that attaches magnetically to the side of the laptop much like the modern Apple iPads.

The Chromebook features an Intel vPro Processor and a haptic Trackpad for better management and security. The laptop supports up to 32GB of RAM and the SSD storage goes up to 512GB. For the wireless side of things, the laptop includes a Wi-Fi 6E and an optional 4G/5G mobile broadband connection as it features a Nano-Sim Slot as well.

The all-new Dragonfly Chromebook features a 5MP Webcam with Bang and Olufsen Speakers. The noise reduction microphones are really good. Despite being sleek the laptop feels slightly heavier than the Elite Dragonfly G3 Laptop.

It has scheduled to release in the market by March 2022 and the price is yet to be announced.

HP has not yet revealed the specifications for the all-new 14-inch HP ZBook Firefly 14.

The bigger 16-inch model has a WXUGA+ Display with a resolution of 1920 x 1200. It also features an IPS panel in both touch and non-touch versions, with the brightness ranging from 200nits to 1000nits. The Firefly features a 5-megapixel AI webcam and it supports Windows Face Recognition, a Bang & Olufsen speaker system, and the optional mobile broadband with support for 4G LTE or 5G. The ZBook Firefly 16 G9 weighs around 3.9lbs.

It has scheduled to release in the market by March 2022 and the price is yet to be announced.

The laptop comes in different brightness variants from 200 nits and all the way up to 1000nits. Mobile broadband is a major feature this year for laptops released at CES 2022 so there is support for 4G LTE or 5G.

Along with that, you have the standard Wi-Fi 6E and Bluetooth 5.2 for wireless connectivity. The x360 HP Laptop also has another non-touchscreen variant known as the Elitebook 1040 G9 which has the same specifications except for the fact that the display doesn’t rotate 360 degrees and comes without a touchscreen display. Although it supports up to 64GB of RAM.

It has scheduled to release in the market by May 2022 and would be priced at around £1099.

The Elitebook 600 G9 is the smaller brother of the Elitebook 800 Series and features three laptops with different sizes starting from 13.3-inch, 14 -inch, and 15.6-inch.

There is an option 4G LTE Connectivity if you want to use mobile broadband but without 5G Support. The HP Elitebook 600 series features a 16:9 aspect ratio display with touchscreen offers. It has scheduled to release in the market by May 2022 and would be priced at around £849.

The Elitebook 400 G9 laptop is an ideal choice when it comes to choosing laptops for businesses. It is available in two variants. The Elitebook 440 features a 14-inch Display and an Elitebook 450 which would feature a 15.6-inch display. There is an option of buying the variant with the Nvidia MX570 Graphics Card.

The aspect ratio of the display is 16:9 and there are touchscreen variants also available with the Elitebook 400 Series Laptops. There is an option of connecting 4G LTE if you want to use mobile broadband with no 5G Support. It has scheduled to release in the market by May 2022 and would be priced at around £849.

So to conclude, this was our total coverage of the latest HP laptops released at CES 2022.