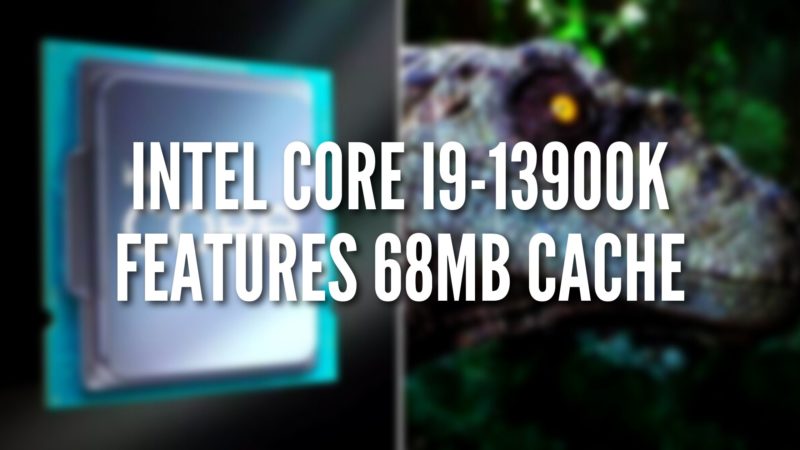 The upcoming Intel Core i9-13900K Processor features a whopping 68MB Cache which is almost the same as an AMD Ryzen 9 5950X.

Intel is again taking a page off AMD’s for its all-new 13th Generation Raptor Lake Processors. These processors will be a total refresh with better core counts, cache, and optimized latencies. However, the core platform remains pretty much unchanged. The Raptor Lake processors will increase cache size all across the board. A specific CPUz screenshot from @OneRaichu says that the Intel Core i9 13900K will go all-in with having the almost 68MB cache as opposed to 72 on the Ryzen 9 5950X.

This upcoming Next-Gen CPU will have a 36MB amount of L3 cache, shared between the 8 Performance Core (P) and 16 Efficient Cores (E). The rest of the 32MB amount of L2 cache will be distributed equally between P and E Cores, where each P core and E core will get 2MB each and 4MB chunks per quad cluster, respectively. If all of the leaked information is true, then the upcoming Zen4 will have 1MB of L2 cache per core. This calculation suggests that it will have half as much as Raptor core and two times more than Zen 3 cores.

Ultimately, these two chipmakers will offer the users approximately the same memory cache on their CPUs in this coming generation. Also, notice that AMD focuses on most of its L3 memory, whereas Intel focuses on L2 and L3. However, different electronics architectures have various types of cache memory requirements along with bottlenecks. But keep in mind that many dedicated Intel and AMD users and fanboys always want the premium things from their preferable brands.

The same news source suggests that Meteor lake will improve the efficiency by shrinking the die with specific power optimizations while making minimal changes to the core. However, the scheduler, execution points and the decoders will get only limited optimizations.

So this was all about the latest Intel 13900K Core and the upcoming Intel Meteor Lake. If you think we missed out on something, let us know in the comments below.