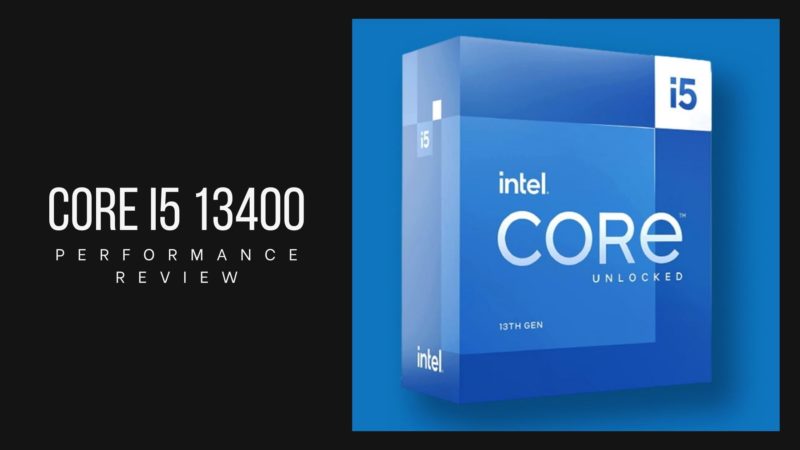 This article is about the new Intel Core i5 13400 Performance and its performance in gaming and content creation applications.

A few months back, Intel released a couple of Intel 13th Generation CPUs. These are all popularly known as the Raptor Lake series. Previously released, the Core i5 13600K, Core i7 13700K and Core i9 13900K processors capture the market benchmark set by the recent launch of AMD 7000 Series Processors.

Today’s article will test the recently launched Intel Core i5 13400 processor. By upgrading and redesigning the structure of the 12th Gen Core i5, this 13th Gen Intel CPU has been manufactured. As soon as we got the processor on our hands, we unboxed it, analyzed it, and did some benchmarking experiments to check whether it was worth it.

So without further delay, let’s check the performance of the Intel Core i5 13400 CPU.

Here is the detailed specification of the 13th Gen Raptor lake Intel Core i5 13400 CPU.

Here are the details of the test setup we are using to test the Intel Core i5 13400 CPU performance.

The Intel Core i5 13400 CPU hits 48 degrees celsius while drawing a 228W from the wall. This is quite unusual for the new Intel 13th Generation CPUs because most of them operate at stable 97 degrees i.e it might be due to the newer advancements they made for their lower-end Raptor lake Processors.

This is not the strongest from the other Core i5 13th Gen CPU version. But although from the performance chat, we can see that it has scored pretty well. It delivers excellent results from software benchmarking for daily life productivity and gaming at 1080p.

The limit is the leading cause for using a 2080Ti GPU for this CPU. Even if we use or put the latest gen RTX 4090 or RX 7900XTX, the result will be the same. So we tested out the processor with an appropriate GPU so that neither of them bottlenecks and it can perform at its best all the time. And at last, we can say that if you are low on budget and looking for the latest generation Intel CPU that can give Medium to High performance, then surely you can go for the Intel Core i5 13400.

If you have a dedicated Graphics card, then an Intel Core i5 13400F will be fine. The core difference is that the F Version will not have a Display option built in, so you will need a dedicated GPU to get a display. Apart from that, there is no difference between the performance and specifications between an F and a non-F version.

Still, we suggest you go for the i5 13400 with the dedicated display option because it can be a great help when troubleshooting, and you can use the PC if you have sent your GPU for RMA or replacement.

So this was all about the Intel Core i5 13400 Processor Performance. If you think we have missed out on anything, let us know in the comments below.