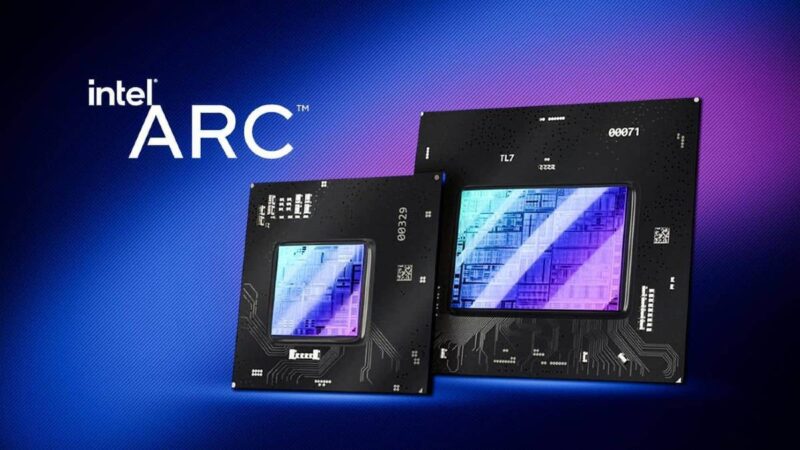 The highly anticipated Intel Arc Mobile GPU comes in to compete with the major players in the GPU market and comes loaded with a lot of new and advanced features!

After numerous delays, teases, rumors, and statements, Intel is finally releasing its highly anticipated Graphics Card in the PC Gaming Market. Intel made it clear with their new lineup of mobile GPUs that it would give some serious competition to both the giant Graphics Card Chip manufacturers, Nvidia and AMD.

Intel has divided its Graphics Card lineup and kept it separate for both the Desktops and Laptops. The lineups are called the Alchemist and ARC. Alchemist series of GPUs are designed for the desktop platform while the ARC series of mobile Graphics cards are reserved for thin and lightweight laptops.

Now further any delay, let’s check out what the new Intel Arc Mobile GPU Lineup has to offer.

Intel has released its new Arc GPU with its affordable ARC 3 series. The A350M and A370M are now available in the laptops which you can preorder right now. Apart from that, there are more powerful ARC 5 and 7 series notebooks that will be readily available in the market in the coming months. The Intel Arc A3 series featured laptops will have a starting price of $899.

Intel has claimed that their Intel ARC Graphics Cards can handle AAA titles on 1080p at 60fps on medium to high settings and with 90FPS in the Esports Games. Intel doubled the speed of their Integrated Graphics Cards to meet this level of performance.

Every ARC Graphics card is capable of supporting four HDMI 2.0 and Display 1.4a Ports. These ports are capable of powering dual 4K displays at 120 FPS or 8K at 60 FPS. The ports might vary from laptop to laptop and it is capable of outputting 360Hz at 1080p or 1440p.

When it comes to the question of Encoding, the Intel Arc Mobile GPU has the power to encode 8k 10-bit HDR along with HEVC, AVC, and VP9. But now for the first time in the history of the GPU market, the ARC Graphics Cards are coming with hardware-based AV1 encoding acceleration.

This Hardware-Based AV1 Encoding Acceleration is the next-generation video standard and it is going to be mainstream soon. The Modern Graphics card also supports the AV1 Decoding that can run these 8K Videos. Until now, we need to have an external Software to create AV1 videos but the Intel claims that the hardware accelerated AV1 is 50 times faster than the software encoders. This Hardware-accelerated AV1 encoding is a major plus point for the new Intel Arc Mobile GPU lineup.

This new Dynamic Power Share technology shifts energy back and forth between the CPU and the GPU intelligently thus saving energy and giving a massive performance boost in all the applications. This technology is similar to AMD’s Smartshift Technology or Nvidia Dynamic Boost technology. When the GPU or CPU will under heavy load, the system will shift more power on its way. In this way, the whole laptop will be more optimized and it will increase the battery life to extend the working hours.

The Hyper Compute is another Game-changing Technology from Intel ARC. It is offering you up to a 24% extra performance boost. It’s a new Intel Deep Link feature that allows you to Enhance, upscale, and visually enhance a 1080p video to 4k resolution through AI.

The Hyper Encode feature lets the software tap into all the Intel media engines on your Intel Arc Laptop and uses it all for encoding the video rather than relying only on the CPU and the Graphics Cards. This is a game-changer for content creators as the encoding software supports Intel Quick Sync Technology.

Another important thing is that Intel is delivering its card with XMX cores. Like the DLSS technology, XeSS is an AI-infused tool to enrich your visual experience. This process can be done via Arc Control API interference, where it will entirely look after the capability of the GPU, so the cooling and other processing can be done simultaneously. This technology uses the XMX cores to use the AI and upscale a lower rendering image without a visual loss.

The Intel Arc Control is a performance tuning software where Intel has infused AI technologies with the help of the all-new Arc Control interface which features the latest design. The software includes everything that you would expect from the software. You will be able to tune your Graphics Card Performance, update your Graphics Card Drivers, etc. We have seen similar functionality-based software for both Nvidia and AMD.

This is not the end. We will be benchmarking the full Intel Arc Mobile GPU lineup. More laptops with the Intel Arc 5 and Intel Arc 7 GPUs will arrive soon. Also, Intel has said that Alchemist GPUs will arrive in the second quarter of this year. So let’s see which GPU takes the number one position in terms of performance.