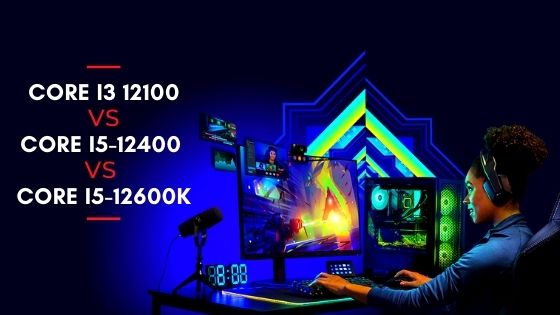 Today we will be testing out some of the best budget intel CPUs for gaming. We will compare head-to-head 3 Alder Lake Intel processors to check how the Intel 12th Gen chips perform in gaming-related applications.

Intel’s 12th Gen entry gaming CPUs fit your budget perfectly. The Intel i3-12100, i5-12400, and i5 12600k are good for low-budget gaming. These chips are very affordable, and faster than last generation Rocket Lake processors.

Except for the Intel i5-12600k which needs a separate cooler, the rest of the 2 Intel Gaming Processor comes bundled with a cooler. Also please note that in order to experience the optimal performance it’s better to switch to an aftermarket air cooler or a liquid cooler to achieve the best turbo boosts speeds.

All 3 CPUs are DDR5 and PCIe express 5.0 Compatible.  These processors have the same memory support capability and can handle a maximum memory of types such as all of 128GB on both DDR4 and DDR5 platforms with a maximum bandwidth of 76.8GB/s.

All 3 of these products support the LGA 1700 motherboards with a maximum core temp of 100°C. These Intel 12th Gen Processors support 64bit Windows 11 operating systems. All processors can support a maximum amount of resolution 4096X2060 at 60Hz with an HDMI cable, 7680X4320 at 60Hz with a Display cable. Apart from being similar on the basic ends let’s check what are differences in these processors which makes them come under different price brackets.

Here we put to test the 3 budget Intel Gaming CPUs. The GPU that we used is an Nvidia RTX 3080 with the GPU clock set at an average of 1911MHz running at around 65°c in high-Performance mode.

We used 16GB RAM which was clocked at 4000MHz along with a 1TB NVMe SSD for storing all the games. We tested all the games at 1080p which is still a standard gaming resolution according to the Steam charts.

But we can expect a slight variation in performance if you are running a different PC configuration. This Intel Gaming CPU benchmark when paired with an RTX 3080 Graphics Card gives the maximum average FPS.

If you are running a lower-end Graphics Card like the RTX 3050, you might expect the performance to go down by a lot but it would stay above 60FPS for most of the games. So you can’t go wrong opting for these budget-oriented Gaming Processors. These 12th Generation Processors from Intel pose a major threat to AMD.

So this was all about the Intel Budget Gaming CPU benchmark where we compared an Intel Core i3-12100, i5-12400, and i5-12600K Processor head-to-head when paired with an RTX 3080 Graphics Card. If you have any suggestions feel free to comment down below.