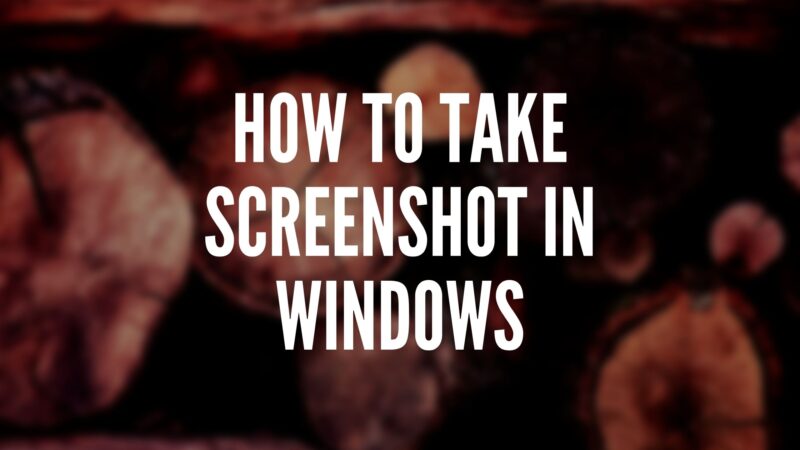 Everybody has a phone now and most of them know how to screenshot cause there r only two keys to press and the screenshot trend started from the mobile phone itself.

However, Windows added screenshot capability from Windows 8 and it has been there and it’s gonna because taking a screenshot while working or editing is easier to send as the size of the file remains less and can be sent quickly.

The methods that we are gonna discuss are Keyboard shortcuts and Windows game bar. The Windows Game bar is easy to access for gamers because if you have an Xbox controller then it’s a button away to take a screenshot which I will discuss below.

How to screenshot on Windows

Windows provides more than one method to Screenshot and there are six methods to capture your desktop as an image using keyboard shortcuts. well, there are three based on the Print Screen (PrtScn) key, while the remaining three require the Windows (Win) key.

On external keyboards, you’ll find a dedicated PrtScn key located in the upper-right corner. The Win key typically resides on the lower-left, between the Control (Ctrl) and Alternate (Alt) keys. On laptops, the Print Screen command may be combined with another function on a single key.

Print Screen (PrtScn): Captures the entire screen. If you have more than one display, this function captures everything shown across all connected displays as a single image.

Alt + Print Screen: Captures a single window and chooses the folder or the window first, such as a document or browser, before pressing the keys. By default, this method does not save your image as a file but just sends the image contained in the capture window to the clipboard.

Win + Shift + S: Captures a screenshot using the built-in screenshot tool called Snip & Sketch. The screen dims and provides four choices on a small toolbar: Rectangular Snip, Freeform Snip, Window Snip, and Fullscreen Snip. The screenshot won’t be saved as an image rather it will move to the clipboard.

Win + Alt + Print Screen: It captures only the active window. well, this command saves an image to C: Users>user name>Videos>Captures by default. In some cases, the screen flickers or dims to signify that Windows grabbed a screenshot.

How to take a screenshot on Windows using Xbox Controller

Windows Key-G opens the Game bar, which includes an icon looking like a camera in its Broadcast & capture section. Tap that, and your screenshot is saved (somewhat counterintuitively) to the Videos/Captures folder under your main user folder.

This can also be done if you have an Xbox controller just press the power on button on your Xbox controller you will see a windows gaming bar appear and there is gonna be a camera logo, with the joystick you can select that and take a screenshot.

Try them and see how useful they are for your daily life.