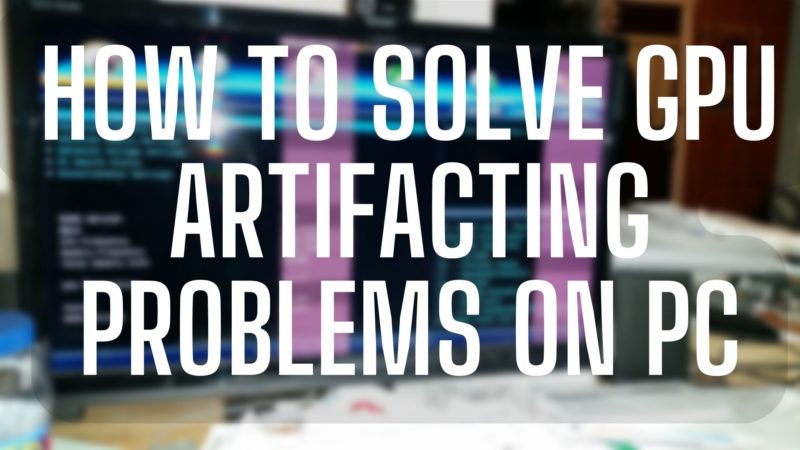 In this article, we are going to guide and help you on how to fix GPU Artifacting Problems on your Computer System.

These days, GPU Artifacting is a common problem for regular Pc users or gamers. When your GPU is directly connected to your Display Panel Unit through a particular video cable, it renders the images and videos to deliver the high-grade visuals smoothly. The GPU or Graphics Processing Unit is a unique processor designed to render visuals smoothly and accelerate the Graphical workload. Its primary function is simultaneously processing data for gaming, video editing and other machine learning activities.

But sometimes, we come across issues with graphics cards, and it gets issues such as glitches, full-screen rainbow colour, excessive colour hue, continuous flashings, etc. This is called called GPU Artifacting. When this happens, the graphics card tends to behave abnormally and doesn’t function properly, creating artifacts and abruptly increasing GPU temperature. This can be frustrating as graphics cards are one of the costliest components in a Gaming PC.

See, there are no ways of fixing a GPU if the hardware goes haywire, but there are certain things we can try to out to see if there are other issues that are making the GPU artifact. So in this article, we will guide and help you with the best of our knowledge on how to fix GPU Artifacing Problems on your PC System.

Before diving into the problem, we must know the exact causes of GPU Artifacting. So here are the possible way which is making your GPU glitch.

Now further any delay, let’s check out the possible ways to fix this GPU Artifacting Problem.

Connect and check your GPU with different Monitors if you face GPU Artifacing Problems in your system. If you observe that your GPU is behaving the same with all the monitors, then it indeed is a fault of your GPU.

Also, for the double confirmation, check for the GPU malfunction. Go to the display settings and navigate to the Graphics option. Under this, select the Power saving option to run your system using Integrated GPU. If you face Artifacting problems here, you might need to get a new GPU.

An excessive amount of Overclocking is creating GPU Artifacing Problems.

Overclocking takes your GPU performance to the next level crossing the marked highest performance limit. But this significantly increases the GPU core and chassis temperature; thus, the durability and lifetime of your GPU decrease. So stop overclocking whenever you are gaming or working.

Additionally, clean your GPU and its fans which catches the dirt and makes the temperature very high. Add some premium thermal paste to the core of the GPU by disassembling it.

Free VRAM Space to get rid of GPU Artifacting issue

Update the Graphics Driver of Your GPU to avoid GPU Artifact

So this was all about fixing the GPU artifacting issue on Windows. If you think we have missed out on anything, let us know in the comments below!