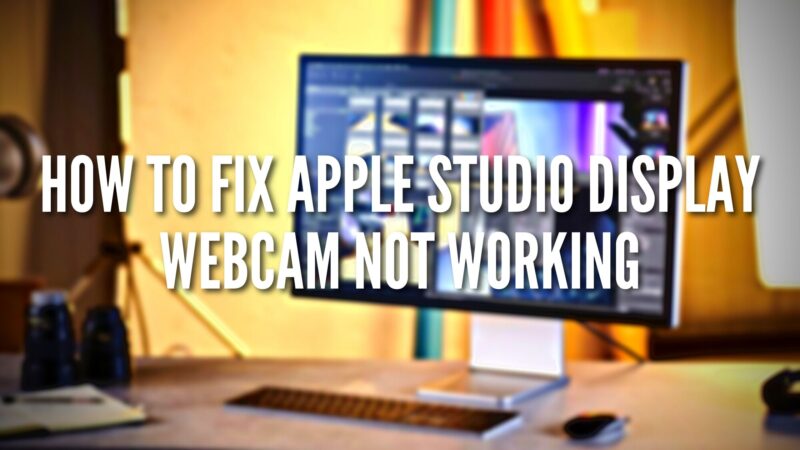 Apple recently released its all-new Apple Studio Display at the Apple March Event in 2022. Apart from showcasing their top, the line features like the 5K Pro Display XDR and their highly anticipated integrated webcam which features the Apple Center Stage technology. The Studio Display performs the best when paired with the Apple Mac Studio. But some of the users reported that they are facing Webcam-related issues and this is what we are addressing and fixing today!

Technology is changing at a faster pace and we are seeing the birth of new products that’s gonna become crucial in a few years maybe. Previously if you wanted to buy a PC then you had to buy a Webcam separately you had to install it by yourself but now Apple has changed the game they brought a Display which has got an embedded camera consisting of center stage tracking.

The real thing is that the studio Display problem is within the software rather than the hardware itself because it would have been catastrophic to get a Webcam that bad with Display that cost more than a month’s rest.

But except for the Webcam problem in the Display, it looks like the Display is of great quality and well built with Thunderbolts built-in at the back, and comes with one of the powerful chipsets that Apple has rolled out last year. The built-in speaker has the technology as the Apple headphones do which is Spatial Audio which sounds excellent.

The negative part about the Display is the wires at the back which are permanently attached to the back of the Display rather than the last year’s Mac which has a Magsafe life power connecter which should have been the case here as well but as Apple has said that this is Studio Display which means for professional purposes so such things don’t move around as much so they made the cable permanent.

And if you are facing the same problem then I would request you to check out the whole article to help yourself solve the problem As Soon As Possible.

If you’re not running the macOS beta yet

Follow these steps to fix the Studio Display Webcam not working. If we find more workarounds for this fix we will update the same on this article so watch this space!