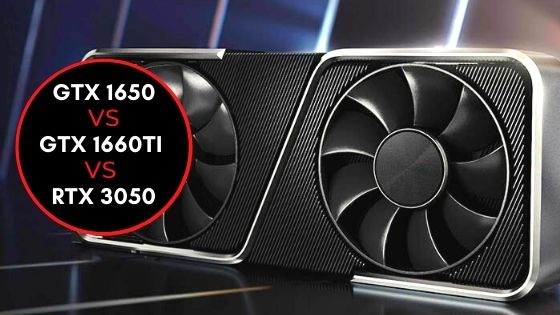 In this article, we look at the performance of the Nvidia GTX 1660Ti and GTX 1650 vs the newly released RTX 3050 Graphics Card.

Nvidia supplied a bunch of 16 series GPUs in these days of crisis for low-budget gamers when the global chip shortage was looming at large. But now recently Nvidia has launched their latest entry-level RTX 3050 Graphics Card.

This card comes as a savior for gamers who are not getting hands-on good entry-level gaming graphics cards. Even the GTX 1650 and the GTX 1660Ti are almost off the shelves due to extremely high demand.

Since these three cards are almost identical in performance it is interesting to see how much different the RTX 3050 actually makes when it comes to GTX vs RTX Performance. So without further delay let’s quickly check out the performance metrics.

The Graphics cards are manufactured with the latest GDDR6 Memory type. The all-new RTX 3050 has support for DLSS and 2nd Ray Tracing while the GTX 1660ti and 1650 don’t support either DLSS or Ray Tracing.

Now here are some differences that make these graphics cards different. The RTX 3050 and the GTX 1660ti come with different base clocks of 1552MHz and 1536 MHz respectively whereas the 1650’s base clock is 1590MHz.

All of these cards have overclocked compatibility and come with support for Microsoft DirectX 12 API, Vulkan API, and OpenGL 4.6.

We wanted to test these three graphics cards out and check how much of a difference does the all-new RTX 3050 makes in terms of performance over the last generation. Currently, Nvidia Graphics cards are giving are performing at their best with Intel Processors.

So for this benchmark, we will be using the highest-end Intel Core i9-12900K Processor which is currently the fastest processor on this planet right now. Along with this, we used 32GB of DDR5 Memory running on Windows 11. We used a 1TB SSD for storing and running all the games.

All the games were running on 1080p resolution, in ultra-high settings to get the maximum out of our Graphics Card. So without further delay let’s check out the performance comparison among the RTX 3050 vs GTX 1660Ti vs GTX 1650 Graphics Cards.

These 3 GPUs are performing very closely while RTX 3050 is a winner among the three as it features DLSS and Ray Tracing. On some occasions, we have seen that the GTX 1660ti is overtaking the RTX 3050 in Gaming performance although we can’t say much about it right now as all the games are not compatible with the DDR5 platform.

But we did expect that the RTX 3050 would perform at least better than the last generation RTX 2060 at a price of $249 price but it failed. Time will tell whether you should keep your existing GTX 1650/1660Ti or upgrade to an RTX 3050 when there are more optimizations made with the DDR5 platform. We will have a separate article for this so stay tuned for more.

So that was all about the GTX vs RTX Performance as we compared head-to-head the newly released RTX 3050 Graphics Card vs the last generation Geforce GTX 1660Ti and the GTX 1650 Graphics Card.