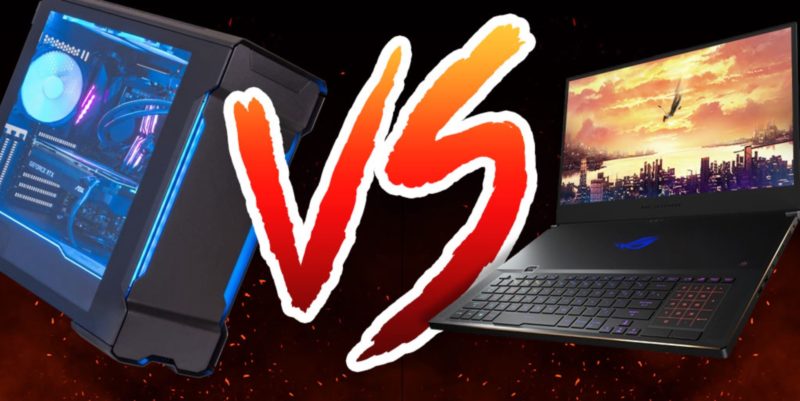 Gaming Laptop or Gaming PC is a classic impasse for Gamers, where it is always tricky to choose which system they need for Gaming.

Those who love playing video games on pc or Laptop always get puzzled about choosing the appropriate system for their needs. Both systems have an almost identical configuration. But one comes with a compact form factor that is battery-operated, and another comes with assembled parts and requires external power. But gamers must decide what they need according to their gaming needs, portability needs etc.

So in this article, we will guide you on the gaming laptops and gaming PC features and which one of the systems will be best suited for Gaming daily. We have compared Gaming PC and notebooks according to some critical points; they are

Before any delay, let’s check out which one to choose, a Gaming Laptop or a Gaming PC.

The parts of a Gaming PC and Laptop are almost the same to run high graphics games. But often, gaming laptops come with H series or mobile series CPUs and GPUs. But for Gaming PCs, you can buy CPU and GPU with the highest variant available according to your motherboard’s maximum support level. Also, the Laptops come with Mobile Processors and Graphics Card, which are undervolted and less powerful than their desktop counterparts. So, in this case, your Gaming PC delivers more performance than gaming laptops.

But also keep in mind that a Gaming laptop comes with a small display which means the load on GPU and the CPU is less compared to a desktop, thus giving lower overall performance. Whereas whenever you are gaming on a PC, the CPU and the GPU are fully stressed to extract the best possible performance.

On the other hand, a Desktop PC comes with a big and heavy cabinet, which is challenging to carry around. Also, a Pc requires a constant power supply to run. However, some mini PCs are available, which are made for carrying to LAN Parties, but we don’t support carrying around a fully built desktop gaming PC.

As we have said, laptops come in a small form, operated with an integrated battery. High-level gaming laptops have a considerable battery to supply power efficiently and continuously during gaming modes. But most of the time, a gaming laptop’s battery does not last even an hour, and you must always be plugged in whenever you are Gaming or doing heavy content editing.

Gaming PCs have a PSU part that must connect with an external electrical power supply board. Nowadays, according to the demand for high-end CPUs and GPUs, a regular gamer with a standard gaming machine in 2020 needs at least a 550W PSU as an ideal power supply watt, while a laptop needs a maximum of 320W for the highest tier Gaming Laptop. So Power Consumption is more on a desktop than on a computer.

Whether on a PC or Laptop, you must have good quality and high-rpm-based silent fans and CPU Coolers if you want to keep your system cool. These fan blades are engineered especially by experts to maintain positive airflow within the system. To keep your CPU temperatures under control, you will need a separate after-market cooler to help you keep temperatures under control.

So, in this case, those Gaming laptops are equipped with excellent quality thin fans and heat pipes designed to create less noise. But at times, it ramps up to higher speeds to facilitate cooling and starts making a humming noise on most Gaming laptops.

But in Gaming PC, if your cabinet comes with a noisy fan with poor thermal management, you can replace it and put top-quality fans along with the best all-in-one liquid system according to your budget. Your entire cabinet will be super cooled without creating any excessive noise.

Gaming Laptops have a built-in Display, Keyboard, Speakers, Memory, Storage, battery, etc. Nowadays, the average price of a high-level Gaming Laptop is priced at approximately $2500. But the main problem is that laptop batteries last about two to three years. Also, a laptop’s average lifetime is nearly five years, which needs replacing. Besides, there are limited upgrade options, as you cannot upgrade the CPU or GPU on the Laptops.

Gaming PC comes with full customization options, and you can replace a particular component if it is not working or you want to upgrade it. The average price of a high-level gaming PC is approximately $4500, which is very high compared to a high-level gaming laptop. But most brands give backward compatibility for their hardware support, so you can keep most of your parts unchanged while upgrading others. An average lifetime of a high-level CPU, GPU, Motherboard, RAM, and Storage unit is nearly seven years.

After carefully analyzing all the valuable cases and points, we can say that Gaming PC is best in terms of Performace and Upgrade options. Also, with a gaming PC, you can focus on your games and content creation very quickly with the help of a big screen. Although purchasing a high-level gaming PC is very difficult as the average price is nearly $4500. In comparison, a gaming laptop provides the most needed features at a lower price than a fully specced out Gaming PC build.

Still, it is neither upgradeable nor easily accessible in case of difficulties. For Gaming, a PC is much better and recommended than a laptop as it has a lot of complications. But with the recent trend of bitcoin mining and GPU shortage globally, laptop sales have sprung up, and those who wanted to buy a new GPU switched to Laptop, which was available at a great price during the GPU market inflation.

So our suggestion, if you love Single Player story games more than competitive multiplayer games, or you are happy just with more than 60fps, and you want to play games while travelling, then choose Gaming Laptop. And if you love Hardcore gaming and want to seriously dominate your enemies on the big screen with no compromise in FPS and performance, then go for Gaming Laptop.

So this was all about Choosing Between Gaming laptops or Gaming PC. If you think we missed out on anything, feel free to comment below.