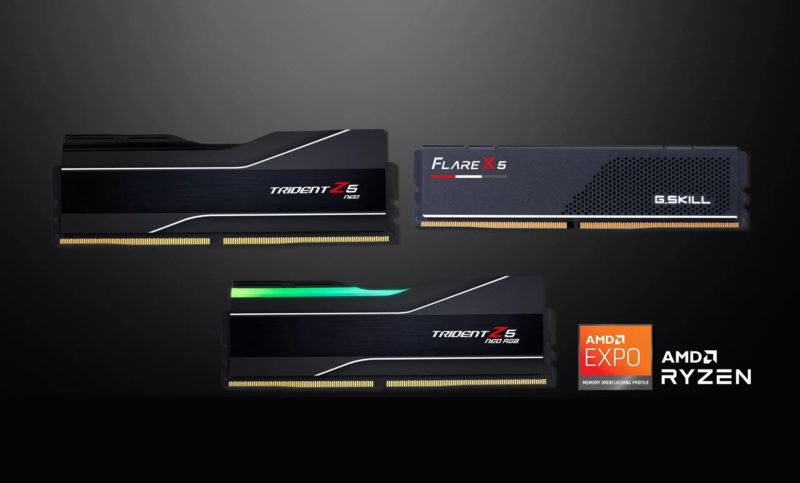 After the new AMD Ryzen Series launch, G.Skill RAM for Ryzen 7000 CPUs with support for ddr5 and supports speeds up to 6000Mhz.

G.Skill has manufactured two different RAM modules for AMD Ryzen 7000 series CPU. One is Trident Z5, and another one is in Flare X5. These memory profiles have AMD EXPO certified and will be the best RAM hardware for the upcoming AMD 7000 series. The Trident Z5 is an old family from G.Skill famous for its DDR4 RGB modules for AMD-based motherboards. And the new Flare X5 series is a new family from G.Skill that will deliver low-profile memory kits like the RipJaws S5 family. For the high speeds, G.Skill will use the EXPO technology, which is expected to take over the Intel-based XMP 3.0 technology.

Here is the company statement from the VP and general manager of client channel business units of AMD company, Mr David McAfee. “We are thrilled to partner with G.SKILL to bring AMD EXPO technology to enthusiasts, gamers, and overclockers worldwide. AMD EXPO technology gives users peace of mind when selecting the memory, unlocking improved memory performance with the click of a button.”

Here are the details of Trident Z5 Neo and Flare X family modules of G.skill RAM for the Ryzen 7000 CPU.

But from all of this, the 5600MHz RAM kit has an excellent timing of 28-34-34-89. However, the price of these RAM kits hasn’t been revealed by G.Skill yet. These RAMs are available from September onwards.

So this was all about G.Skill RAM for the upcoming Ryzen 7000 series CPU. If you feel we have missed out on anything, let us know in the comments below.