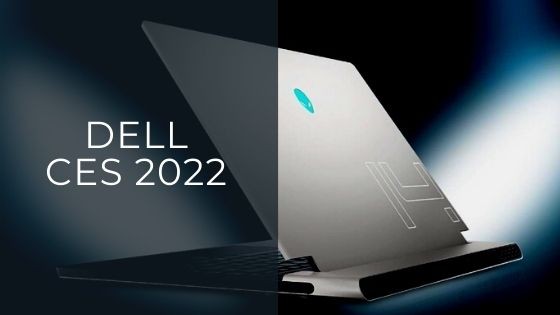 Dell’s latest announcement from CES 2022 blew us away with their all-new Alienware and the thin XPS Business Series Laptops. We covered the best upcoming dell laptops in 2022.

So last year CES 2021 which was held entirely virtually in January 2021, was surprisingly good despite 2020 despite being such a bad year as the whole world went into lockdown due to the Coronavirus Pandemic. Plus we already knew that the whole tech show will be online and there would be no way for us to get on the hands-on experience of using these powerful modern machines.

Most of the Laptop and PC manufacturers do send over their flagship models to try out. Same for this year as well, the Omicron Virus is still looming at large and that is the reason many brands and media opted out from visiting in person and rather preferred getting a device shipped or attending an event virtually.

We will be seeing a couple of new laptops that was launched by Dell in CES 2022. These Dell Laptops 2022 stood out great and these are well equipped to handle the heaviest workloads. We will be seeing more full HD webcams that are extremely better for work-from-home situations for video conferencing, online classes, etc.

So without further ado let’s quickly jump on to see the best upcoming Dell Laptops in 2022.

This is the latest Dell XPS Laptop launched at CES 2022. The Dell XPS 13 laptops are always our go-to laptops for one of the most premium looks and feel.

The all-new Dell XPS 13 Plus takes it to a much more minimalistic level with a much more modern look and approach. There is no distinctive touchpad on this device except for a single glass piece from along the front. There arent no left or right touchpad buttons but instead there is a touch-controlled strip that can be swapped between the Fn and the media control keys.

They look very cool but considering the real-world application and how the end-user takes it that is what matters to us the most. There are 4K OLED variants also available along with up to 28 watt Intel Processors which are an upgrade over the traditional Dell XPS 13 Laptops. It weighs around 2.7 mounds and is 15.3mm thick and the starting price would be around $1199.

Since with the inclusion of nano bezels and the new 16:10 aspect ratio displays, the 14-inches laptops are the new 15-inches and this was the highlight of the Dell Event at CES 2022. The new Alienware’s thin X Series Gaming laptops have an all-new 14-inch display.

Dell managed to cram in the latest Intel Core i9 12900HK processor along with the all-new Nvidia 3000 Series Graphics Cards. they also feature new dirt and stain resistant finish which is actually a good thing because the whole unit is white.

The Alienware x14 2022 Gaming Laptop starts at around $1799 in the US. Of course, the laptop is thinner and smaller than the previous generation Alienware gaming laptops but this laptop is deceptively heavy. Despite being 14 inches it weighs around 1.89kgs i.e 4 pounds.

Dell had to make it a little heavier to incorporate the proper cooling system required to cool the CPU, the GPU, and as well as the internals. It also doesn’t sacrifice on any of the ports and includes a Micro-SD Card Slot.

The latest dell Alienware Laptops will come equipped with up to an Nvidia RTX 3060 Graphics Card along with a Core i9-12900H Processor which also supports the Nvidia Advanced Optimus Technology and a Full HD 144Hz Display. You will also get to enjoy the dual-channel DDR5 Low Profile Memory along with support for the Dolby Atmos Surround.

We already reviewed the Intel version of the Alienware m17 R4 Last year and we were simply blown away with what Dell had to offer. Not only the top-notch CPU and GPU, but the Alienware m17 R4 also features an attractive big gaming screen and serves as a portable workstation too. Yes, we all know that Gaming laptops don’t fare well when it comes to battery life.

It is based on the same chasses and comes in Gray color rather than white. Dell went with an AMD build this year with the all-new AMD Ryzen 9 6980HX CPU and an RX 6850M XT Graphics Card. It is going to be the first laptop that is going to ship with AMD Smart Access Graphics.

Both the Alienware m15 and m17 will feature both Intel 12th Gen and AMD’s latest 6000 Series Processors. It will be priced at $1599 and Alienware is the first partner system to be shipping their laptops with AMD Advantage Specifications. This means that this Alienware laptop will be using all of AMD’s latest technologies like prolonged battery life when your laptop is not connected to an external power source.

Although it is worthy to mention that over the years we have seen that the 15-inch Gaming laptops have a better battery than the 17-inch ones. All the new Alienware Gaming Laptops will be featuring the Dolby Vision and Dolby Atmos for providing Spatial Audio to all the Gaming Systems.

So these were the best dell laptops released in CES 2022.