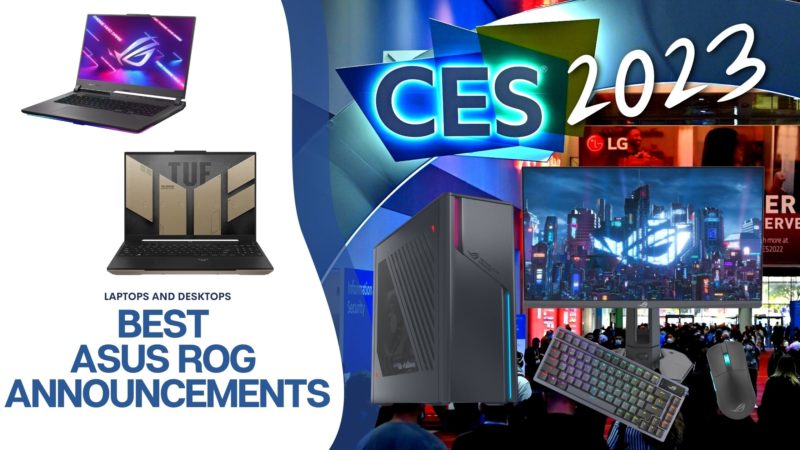 The recent ROG announcements at CES23 show that they are bringing a lot of new desktop and laptop gaming hardware into the market for 2023.

The highly anticipated CES 2023 is here. And along with all the other brands like Acer, Dell, MSI, Lenovo, Razer etc., Asus also launched its brand new lineup of Gaming Products that will be available from 2023 onwards.

With the start of the new year 2023, Asus has announced a ton of new gaming hardware, laptop, all-in-one Gaming PCs and PC gaming Peripherals at the International CES 2023, held in Las Vegas.

Asus is always ahead of making the most durable and advanced gaming hardware for PC and laptop gaming. Asus doesn’t compromise on anything when it comes to its gaming hardware. They have always aimed to deliver the ultimate experience to gamers.

So without further delay, let’s check find out the Best ROG Announcements At CES23.

Here are some highlights of the PC Gaming hardware revealed at the ASUS ROG Announcements at CES23.

Asus ROG has manufactured both the Harpe Wireless Gaming Mouse and Hone Ace mouse pad with the collaboration of AimLab. Nowadays, most FPS players struggle to find the proper Mouse sensitivity; minimal mouse click response time, and the mouse’s shape, weight, and texture. To get rid of this problem as much as possible, Asus has manufactured Harpe Mouse and Hone Mouse pad in collaboration with the developer and CEO of AimLab.

After doing deep research and testing at least ten prototypes of the Harpe Mouse, Asus and Aimlab finalized the ultimate design of the mouse. It will offer optimal comfort for all the different grip choices for FPS gamers. The outer material of the mouse is made of bio based Nylon, and the internal circuit has a streamlined PCB layout. The weight of the mouse is 54 grams with a wireless design. The mouse pad now also comes with numerical numbers to measure the distance of mouse dragging.

The mouse comes with ROG Speednova Wireless technology and a ROG AimPoint Optical Sensor. It also provides ROG Microswitches and comes with ROG Paracord with 100% PTFE feet. It has a maximum DPI of 36000.

Asus also revealed their latest dedicated gaming keyboard, ROG AZoth. The Azoth is a wireless 75% keyboard fully packed with armed features that you can find on a premium DIY keyboard. On the top right side, a small OLED panel has been placed, which will indicate the current status of the keyboard, such as connection mode, animations, battery level, sound, etc. The wireless speed of this keyboard is 2.4 GHz.

The panel will also show you system information like CPU and GPU frequency with temperature, RAM speed, etc. These things can be customized with the 3-way knob and side button on the top end of the keyboard. Besides it will also show you whether your keyboard is connected to Microsoft Windows or Apple Mac operating system. Along with the wireless function, you can also use this keyboard with wired USB C or wireless Bluetooth connectivity.

With a 2000hr of battery life, it can be fully customized using the ROG Armoury Crate software. Physically, it has been built with a gasket mount design to give the ultimate typing experience. It includes a 3.5mm thick silicone pad, an additional Poron foam pad, and a Silicon Foam lined base to absorb vibrations completely. The factory-based ROG mechanical switches are red. And if you wish, then it also has a swappable feature. Asus also offers a complete DIY lubing starter kit and tools.

In this refresh rate rat race, Asus has also enlisted their name to amongst the fastest monitor in the world. With the successful collaboration of NVIDIA and AUO, Asus has finally broken the line of 500Hz refresh rate bringing in a unique 540Hz monitor model, ROG Swift Pro PG248QP, in 2023.

With an Esports TN panel technology, the monitor is equipped with a size of 24 inches and a native 1080p resolution. As it has collaborated with Nvidia, it has the G-Sync feature and Nvidia Reflex Analyzer. This superfast monitor can capture end-to-end system latency with a response time of 0.5ms.

The whole body, including the frame of this monitor, has been redesigned. The monitor also has a rotational feature with a fully adjustable ergonomic stand with solid base claws. One of the most impressive things is that this monitor holds ESS DAC Sound technology, which lets you fully hear the Gunshots and Enemy activities with near-zero latency audio. All of the above features make it the ultimate Esports Gaming Monitor.

With a big screen of 27-inch 1440p, Asus is releasing a big monitor for you to enjoy single-player games. This monitor is now constructed with an anti-glare micro-texture coating; it has a refresh rate of 240Hz with a minimal response time of 0.3ms. The main features of this monitor are-

While some latest gaming motherboards provide Intel Killer Wi-Fi 6E models, Asus offers you the 7th-gen Wi-Fi 7 model with their ROG Rapture GT-BE98. This is no doubt the next-gen gaming router.

This router model supports up to 320MHz channels in the 6GHz band. Also, this 7th Gen router has a 4K QAM modulation feature, increasing peak data rates up to 20% compared to Wi-Fi 6.

ROG Rapture holds two significant features of Multi-Link operation and Multi-RU puncturing. This feature helps to simultaneously send and receive data across different frequency bands and channels. So no more limited data transferring and loss while operating. And also, 160% faster speed when compared to the last generation Wi-Fi 6 models.

Asus is offering a compact gaming PC in 2023, ROG G22. It is now 40% smaller than the previous ROG G21 readymade PC. With only a space of 10 litres volume, it is very much portable and can be carried for your daily

It comes with a 13th Gen Intel Core i9 13900KF CPU with Nvidia 40 series GPU and 64GB DDR5 RAM of 4800 MHz frequency rate. With a complete metal body design, it delivers an outstanding performance in thermal cooling management. For customization, there is an option to upgrade the internal parts, including water cooling.

With Nvidia’s latest Ada Lovelace GPU Architecture, these laptops hold DLSS 3 technology with 3rd gen RT Cores and 4th gen Tensor Cores. New 2023 ROG laptops can include up to RTX 4090 model of Nvidia for an ultra-fast gaming experience and other graphics productivity.

New ROG laptops also come with the latest Intel or AMD CPU. For smooth gaming and working experience, ROG has put the Nebula display in their latest-gen laptops. With HDR and mini led included, the picture and video quality look astonishing and near the real world. This laptop’s max brightness level can go up to 1100 Nits, along with stunning contrast. The nebula engine combines a 5400Hz polling rate.

Asus has also worked on the cooling sections for these laptops. All laptops now hold liquid metal as a cooling component for the CPU and GPU. The ARC flow fans have been redesigned and come with 84 blade fans with only 0.1 mm of thickness. With less noise, the fans now deliver more air cooling to keep the system under safe temperature mode. Besides, the fans can go to 0db mode for power saving and silent computing.

The ROG Strix Scar16 (Model – G638) and the ROG Strix Scar 18 (Model – G834) are powered by the latest 13th Generation Intel Processors paired with the RTX 4000 Series Graphics card, which has a TDP of 175W. These laptops will also feature the latest 4800Mhz DDR5 RAM and memory support of up to 64GB. It also features a mini LED Nebula HDR Display with a 90W/hr battery and triple fan cooling technology.

The ROG Strix G16 (G614) and the Strix G18 (G814) are powered by the Intel 13th Generation Raptor Lake Processor and have support for up to 64GB DDR5 4800Mhz RAM along with 4TB Gen4 SSD. These laptops come with the Nvidia RTX 4000 Series Graphics Card and the tri-fan cooling solution. It has a peak brightness of around 500nits with a refresh rate of 240Hz and a 3ms response time.

On the other hand, the ROG G17 (G713) Strix will feature the latest AMD Ryzen 7 or Ryzen 9 7000 Series Mobile Processors paired with the newest generation RTX 4000 Series Graphics Cards. The laptop will be based on the DDR5 platform and comes with PCIe Gen4 SSD with Wi-Fi 6E connectivity. It has QHD Display with 240Hz Refresh Rate.

The Zephyrus G16 will feature a 16:10 aspect ratio panel with a 240Hz refresh rate and 3ms response time. These laptops will feature a six-speaker setup paired with dual force cancelling woofers, a good 90W/hr battery and a 3D Array Mic.

The 14-inch Zephyrus G Laptops will have a Nebula HDR Display and a QHD Resolution Panel with 164Hz Refresh Rate.

The ASUS ROG Flow Series of laptops will feature the Z13 Flow 2023 version, the smallest ASUS laptop measuring only 13 inches, and a touchscreen panel with a peak brightness of 500nits and a 165Hz refresh rate.

The ROG 2023 Flow Z13 Laptops support external Graphics cards and the XG Mobile, and it has a fully detachable keyboard.

The X13 has a 13-inch full touch screen mini LED display which the latest Intel 13th Generation Processors will power along with the latest Nvidia RTX Graphics Card.

The TUF Generation laptops from ASUS are the cheapest and most affordable Gaming laptop lineup. The TUF series laptops will be taking advantage of being the AMD Advantage laptop as they will have both the CPU and GPU from AMD.

ASUS TUF Series of Laptops will have models ranging from F15 and F17, and the Intel + Nvidia version will be known as the A15 and the A17.

So this was all about the best ROG announcements at CES23. If you feel we have missed anything, let us know in the comments below.