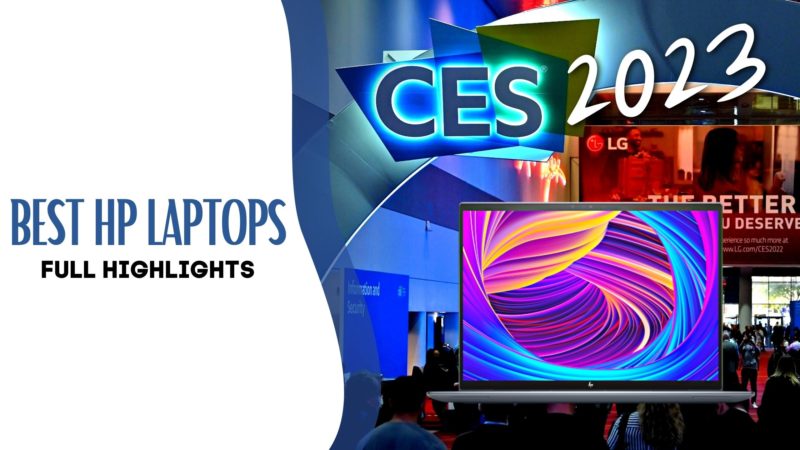 Here are the major announcements that were recently made regarding the new and upcoming best HP Laptops at CES23.

CES 2023 is finally here. And along with all the other brands like ASUS, Dell, MSI, Lenovo, Razer, Acer etc., HP also launched its brand new lineup of Laptops.

This year HP launched a new set of laptops, especially for those who are most like to be doing hybrid and remote work, i.e. freelancers or entrepreneurs. These laptops will also attract business personnel, and the special edition HP laptops can also be great for regular use. We saw a new One HP Desktop, a 44-inch Ultrawide Monitor, and a new series of Monitors for home/office users.

The new laptops will be powered with the all-new Intel 13th Generation Processors or AMD Ryzen 7000 Series CPUs. We also saw some laptops with the last generation 12th Gen CPUs and HP reserved those for the mid-lower end notebooks. The monitors are the ones that you should be eyeing, especially if you are a multitasker.

So without further delay, let’s check out the best HP Laptops revealed at CES 2023.

These are the following HP laptops revealed this year at CES 2023.

The HP Dragonfly Pro laptop features the all-new AMD Ryzen 7736U Processor and runs on an integrated graphics card. It has a 16:10 aspect ratio display along with a multitouch. It has a resolution of 1920×1200 and is a 14-inch IPS Panel. The laptop has a 64.6Wh battery with a USB Type C Power adapter of 96W. You can choose between a 16GB or a 32GB RAM variant and a 1TB or 512GB RAM Variant.

The Dragonfly Pro Chromebook 14 is a step-up version featuring a Core i5 1235U 12th Gen Processor and a 51.3W/hr battery. It also has the 96W fast charging functionality and will only be available in 16GB DDR5 RAM and 256GB Storage configuration. It will have a 14-inch IPS panel, and the graphics will be taken care of by the integrated GPU.

The Dragonfly G4 comes with the latest Intel 13th Generation processor and supports up to 32GB DDR5 RAM and up to 2TB NVMe Storage. This is a 13.5-inch laptop with multiple display panel options up to OLED 3000x2000p.

The laptop supports dual video stream, camera switching, face tracking etc. The keystone correction works well, which makes the edges of most of the content look sharper. The complete HP Series received a battery upgrade by using AI to reduce the need for power wherever required.

These features also come packed on the lower-end Elitebook 1040 or the Elite x360 G10. They are identical laptops except for the x360, which can be used in tablet mode. These laptops will be powered by Intel 13th Gen P and U Series chips and can support up to 2TB Storage with up to 64GB in dual channel DDR5 mode. Different display versions of the same model will be available, including a 120Hz panel variant.

The display resolution is 2560×1440 for the 14″ AMD Models, but you won’t get the higher definition panel on the Windows edition. The maximum storage support is 1TB, while the full memory support is 16GB.

These laptops will have a starting point of $419 and can go up to $499, depending on the model.

Apart from the Laptops, HP also announced an HP 27-inch Desktop, which will come with both AMD 7000 Series Processors and Intel 13th Generation N Series Processors. These All-in-One PCs will have 32GB DDR4 Support and an NVMe Slot with a maximum storage of up to 1TB. Both touch and non-touch variants will be available with a resolution of 1920×1080 with 720p/1080p webcams.

Finally, HP also revealed some of their beautiful monitors. Their E Series G5 lineup of Monitors will have a starting size of 21.5 inches and will go up to a behemoth of 44.5 inches. These monitors are curved with a resolution ranging from 1080p to 4K. The flagship model is the HP E45 G5 DQHD, a super ultrawide curved display that can work as two 2560x1440p monitors if kept side by side. The price of the E Series monitors will be around $219.

The M Series Monitors, on the other hand, will feature the FHD panel with a maximum refresh rate of 75Hz. These monitors are manufactured to improve the buyers’ comfort so you can improve your posture while working. The M Series monitors will be priced at around $209.

So this was all about HP Laptops CES23 Highlights. If you think we have missed anything, let us know in the comments below.