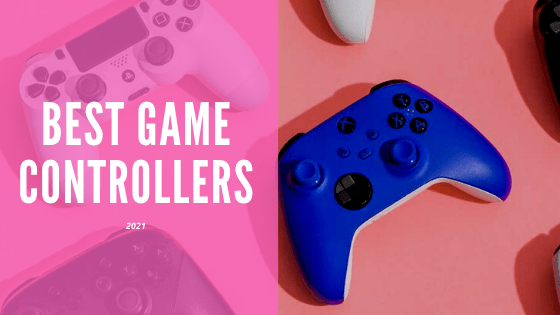 These are our top 5 chosen picks for the best Game controllers that you can buy for PC, Xbox, and PS4 in 2021. We listed out both the Wired and Wireless ones for your convenience to choose from.

Gaming has taken over the world by storm especially after the wake of the Corona Virus Pandemic globally. And since everybody stayed indoors, around 80% of the youth and middle-aged people started gaming. Whether it’s on a PC or consoles like Xbox and Playstations, most of the population started gaming and also started created content around gaming on various online platforms to show off their skills.

While it’s true that when you are in the PC Master race league, you don’t need anything other than a good gaming keyboard or a gaming mouse to have a great gaming experience. But it doesn’t hurt much if you consider yourself getting a gaming controller for yourself. There are a lot of brands that manufacture gaming controllers. You can choose a variety of gaming controllers from brands like Logitech, Razer, Microsoft, Thrustmaster, etc. These game controllers are the best when it comes to compatibility as all of the said gamepads are compatible with Xbox, Playstation, and even with PC.

Games are mostly designed to be playable with a controller except for the fact some esports titles like Valorant Counter-Strike GO and other first-person shooter games might not be a good choice for Gamepads. 3rd person games like Hitman Series, Just cause Series and other games can be played on controllers. You can experience games like Mortal Kombat, Street Fighter, or sports games like FIFA, Madden much better when played with Gamepads rather than your keyboard and mouse. Gaming Driving Simulator Wheels like the Logitech G29 with gear shifters are also introduced in the market and it is extremely popular among Racing Sim fans. So these are the best game controllers to start with

Using a keyboard and mouse most often hampers your overall gaming experience. The major games are developed at first using the consoles in mind so this is one more reason for you to start gaming with gamepads and game controllers. The Crossplay between consoles and PCs in recent years has also encouraged the developers to make a more robust gamepad control system so it’s ready to play when you plugin the control with all the classic controls assigned and mapped on the game controller. And yes, obviously gaming with a wireless game controller gives you the option to sit back comfortably on a couch and enjoy your gaming sessions either on a monitor or on a big TV hooked up to your console or your PC.

So let’s talk about the Top 5 Best Game controllers for PC/ Xbox and PS4. We have both wired and wireless gamepads on our list.

The first controller on our Best Game Controllers lists is the Logitech F710 Wireless Gamepad. This is one of the best and most used wireless gamepads that are available in the market. It has a distinct Playstation style button layout. The build quality is super impressive and the connection is extremely seamless. The Gamepad is designed for PC gamers so that they can have a complete console-like experience.

The X Input and the Direct Input make it extremely easier to use. You can connect this to your Smart TV and enjoy web surfing while sitting back on your couch. 4 separate switches are extremely responsive and tactile. The buttons are also illuminated so you won’t be having any issues while using this in the dark as well. The device is also compatible with Chromebooks. The controller has inbuilt XID mode which makes the controller more responsive and has a console-like layout both for games.

It also comes included with an adapter that you need to connect on your laptop or desktop and you are good to go. The driver would install automatically once you plug the dongle into your PC or Laptop. There is also a Logitech Software which you can download directly from Logitech’s website. You can use that software to create profiles to match your game modes. The buttons are fully programmable to mimic the mouse and keyboard commands.

The second Gamepad on our Best controller list is the Microsoft Xbox Controller. This Controller is compatible with the latest version of windows including Windows 8.1, Windows 7, and on consoles like The Xbox One. The Xbox button layout makes it easier for every gamer who is familiar with the Xbox Gamepad layout. The controller has a balanced overall weight and it feels extremely comfortable in the hands.

This specific Xbox One Controller is a wired one although there are wireless versions available for this model as well. Having a Wired controller removes the hassle of changing batteries almost every week if used daily. The new Xbox One Controller has twice the range as compared to the last generation Xbox Controllers. The detachable USB cable that is provided with the Xbox One Controller ensures a smooth gaming experience without disconnects and latency on Windows 10 devices.

The Wire is six meters long so you can get comfortable on your couch and play games. The Microsoft Xbox One Controller is aesthetically one of the best and simplest looking Game Controllers out there and comes in a sturdy outer shell covering which provides maximum durability.

The third Gamepad on our best game controllers list is the Thrustmaster Eswap X Pro Gamepad. This is one of a kind controller in the market that is modular. That means you can change the switches to suit your play style. Whether you want an XBOX-like button configuration or Playstation experience, this Thrustmaster Eswap X is hard to beat. The new Next Generation Mini sticks have a much longer lifespan with great precision. The keys are ultra-responsive with physical locking triggers and direct remapping of the rear buttons.

The TMod Technology and the facility to swap a specific module at any point of the time in the game. The latency is negligible, to say the least. The Thrustmaster Eswap Game controller comes with different sets of color packs so that you can choose your favorite color scheme for your controller. This Gamepad is supported on PC as well as consoles like box One, Series X/S.

The fourth and most unique Gamepad on our Top 5 best Game Controllers list is the Valve Steam Controller. This is a very unique type of controller which consisted of two big touchpads. These touchpads have tweakable sensitivity and it offers a proper mouse and keyboard like precision when gaming. We don’t have such features on Xbox and Playstation gamepads.

The Steam Controller lets choose and customize each button on both axes and a game-to-game basis. The modified controls can also be shared on the steam community to help other gamers find the write button configuration to play certain games. Turn-Based Strategy games like the Pillars of Eternity work extremely well on these handheld steam gamepads. The

The fifth Gamepad on our Top 5 best Game Controllers is the Sony Dual Shock 4 Wireless Controller. This Gamepad is meant specifically for PS4. It is one of a kind Controller that Sony has introduced in the market. It features an integrated touchpad along with an integrated light bar.

The built-in speaker is a huge addition to the Playstation controller series. The charging is fast and efficient and you can use any standard USB cable to charge your Controller. The Vibration motors on the controller work extremely well and it responds well to the events happening in-game. The controller can be used in both wired and wireless modes.

So these were the top 5 best game Controllers that you can buy in 2021. The other worthy mentions include the Nintendo Switch Pro Controller which is specifically designed by Nintendo for their handheld devices. You can also take a look at the Razer Kishi Mobile Gaming Controller. It is one of a kind controller designed specifically for mobiles. You can experience Console quality gaming on this.

To conclude, we hope you’ve found the list of our top 5 best game controllers for PC, Xbox, and PS4 in 2021 to be useful. We listed both wired and wireless models so that you can choose based on your preference. All these products are currently available on Amazon if you want to go ahead and purchase one today!

Thank you for reading till the end
Until next time!