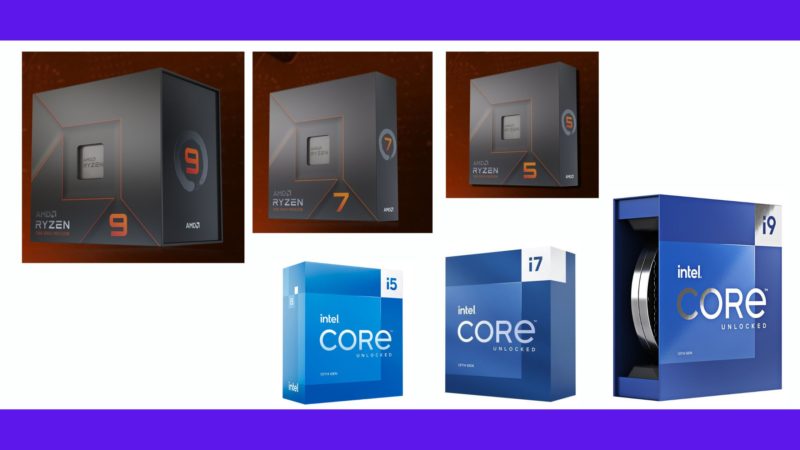 This article lists the top 5 best CPUs in 2023 that have performed best in gaming and other content creation.

In 2023, a handful of CPUs from both the Red and the Blue Team has released. These CPUs now support the latest Gen PCIe Gen 5.0 and DDR5 technology. These latest CPUs are equipped with the latest technologies and are almost twice their last year’s counterparts.

So at the end of 2022, we picked up the best and the fastest CPUs you can buy either during the holidays of 2022 or 2023. We have chosen the CPUs based on their performance, price, design, capability to handle the latest gen technologies, etc.

So without further delay, let’s check out the top 5 best CPUs in 2023.

Undoubtedly, this will be the best and the fastest CPU of the year. Intel again took the crown this year by releasing the Core i9 13900K. This is the ultimate CPU in the PC gaming market, with 24 cores and 48 threads. This time, it comes from the Raptor Lake S family with Gen 5 support.

Intel has manufactured it with a base frequency of 3 GHz, which can be boosted up to 5.4GHz. It also supports a base of 5600MT/s Speed of DDR5 ram and can be boosted up to 6800 MT/s. This 13th gen CPU has compatibility with Z690 and Z790 motherboard and has a price tag of $589. Those looking for the ultimate gaming and content creation performance can surely go for this CPU.

Our 2nd choice goes with AMD Ryzen 9 7950X. It is the 2nd best CPU from the AMD Ryzen family. AMD has upgraded and redesigned its CPUs to get compatible with DDR5 technology. It is the best AMD CPU in the PC gaming market and almost matches the performance of the Intel 13900k.

By keeping the fact of the latest gen games, It comes with a 16 cores and 32 threads design. With a base frequency of 4.5 GHz, you can boost it up to 5.7 GHz. With integrated AMD Radeon Graphics, it has a base clock of 400 MHz. It supports X and B series 670 and 650 series motherboards along with the max capability of 6000 MHz DDR5 ram support. If you are looking for an update from the last-gen core i9, then go for it, as it will deliver more gaming fps.

Our 3rd choice goes with Intel Core i7 13700K CPU. This CPU from intel is an upgraded version of the 12th gen alder lake i7 CPU. This is the best mid to high-range CPU in the PC gaming market. With a similar design to the 12th gen core i9, It has been manufactured with 16 cores and 24 threads. It also has backward DDR4 RAM support compatibility.

Intel Core i7 can deliver some great software benchmarking outcomes. It has a max supportive 6000 MHz RAM and can produce great single and multicore performance in Cinebench, Geekbench, Blender, Adobe Premiere, Unreal Engine 5, etc. It performs better in games than the last year’s Intel Core i9 12th gen CPU and the Ryzen 7 7700X.

Our 4th choice goes with AMD Ryzen R7 7700X. AMD’s Ryzen R7 7700X is the best CPU that can be a great alternative or replacement for Core i7 13700K. If you are looking mid to high-range CPU within a budget with all the latest generation technologies built-in, then you can choose this CPU easily for your gaming right now.

AMD Ryzen R7 CPU comes with a Base frequency of 4.5 GHz. It has manufactured eight cores and 16 threads which may be lower than the 13th gen Core,i7, but it has outperformed in some latest games regarding the fps benchmark. It comes with only DDR5 compatibility and has compatibility with both X and B series motherboards.

Our 5th choice goes with Intel Core i5 13600K. It is probably the best entry-level CPU currently in the PC gaming market. It comes with 14 cores and 20 threads design which is good for the latest gen entry-level gaming. The performance of the Core i5 13600K is much better than Ryzen 5 7600X while both being similarly priced.

Like other CPUs, it has the compatibility of supporting DDR5 ram. It can support a max of 5600 MT/s speed. It supports Z790 and Z690 series motherboards. Intel Core i5 13600K comes with a base frequency of 3.5 GHz. You can boost it up to 5.1 GHz. If you have a high range of hardware, you can easily get approximately an average of 200 fps in every latest-gen game through its CPU.

Our last and final choice goes to the AMD Ryzen 5 7600X CPU. This is the cheapest AMD CPU that you can buy with DDR5 Support. Right now, it is the lowest variant in their whole lineup. It consists of 6 cores and 12 threads and is unlocked for overclocking. The Ryzen 7 7600X is faster than the previous generation Intel 12600K as shown in this article and overtakes the last year’s AMD Ryzen 5 5600X with a significant margin.

So this was all about our top 5 picks of Best CPUs in 2023. If you think we have missed anything, let us know in the comments below.