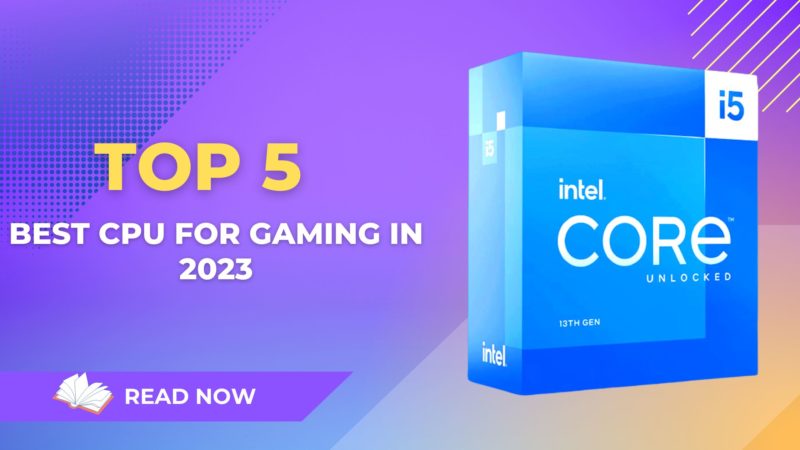 These are the top 5 best CPU for Gaming in 2023. We have mixed the Intel and AMD Processors, so you can’t be wrong about choosing one.

Nowadays not only GPUs, but CPUs plays a major role in Gaming Performance. But earlier there was a mindset that, when it comes to games, all gamers always prioritize the GPUs first as it is related to the Graphics. But most do not know that the CPU is key to unlocking the highest FPS possible for a game.

For example, if you try running a very low-level CPU with the latest gen high-end RTX 4090 GPU, you wont be able to unlock the full potential of the GPU because of the CPU bottlenecking where the CPU is not being able to feed the GPU with enough power to run at its maximum capability. So choosing the right CPU is crucial when it comes to Gaming builds.

So this is the reason we picked upot the Top 5 best CPUs for your 2023 gaming PC, which will deliver a great performance and will perfectly fit under your budget.

It is a Mid-range CPU that runs at a speed of 3.5 GHz Base Clock and can go up to 5.1GHz on turbo. With 14 Cores and 20 threads, this processor also has the Intel UHD 770 integrated graphics solution, so you don’t need a GPU to get a display in case you didn’t get a GPU.

Our 2nd choice of processor goes with AMD Ryzen 7 7700X CPU. This is the latest AMD AM5 CPU based on the 5nm FinFET technology. Ryzen 7 7700X belongs to the Gen 4 Raphael and has been manufactured as a successor of their last generation AMD CPU to counter the 12th Generation Intel series Processor. Its base frequency of 4.5 GHz features the latest Gen 5.0 feature and 24 PCIe lanes. You can go for X670E, X670, B650E, and B650 chipset motherboards for this CPU.

Our 3rd pick goes with the Intel Core i5 13400 CPU. This CPU is a successor of the previous 12th Gen Core i5 12400 CPU. It is a Hybrid Midrange CPU that has 6 P cores and 4 E Cores. The E Cores or the Efficiency Cores base frequency of 1.8 GHz can go up to 3.3 GHz when in Turbo Boost mode. It can support DDR5 128GB RAM with a max frequency of 4800 MT/s. Here are some of the best motherboards that you can pair this processor with.

Our 4th choice goes with AMD Ryzen 5 7600X. This AMD Gen 4 Raphael CPU features the new AM5 socket compatibility. Based on the gaming fps benchmark test, this CPU is faster than the 12th Gen Intel Core i7 12700K and Ryzen 7 5800X in some cases. With a base frequency of 4.7 GHz, it can be boosted to a maximum speed of 5.3 GHz. It has 6 Cores and 12 Threads and dual DDR4 and DDR5 RAM support.

Our 5th choice goes with AMD Ryzen 7 5800X3D CPU. This CPU performs almost the same as the 12th Gen Intel Core i7 12700K. This processor doesn’t have DDR5 support and still runs on the DDR4 Platform, and comes with an AMD AM4 Design Socket. It has no integrated graphics solution for getting a display without a GPU and supports all the last-generation AMD Motherboard series.

Except for the AMD Ryzen 7 5800X Processor, all of the processors on this list support PCIe Gen5 SSDs and DDR5 RAM.

So this was all about Our Top 5 Picks of Best CPUs for Gaming in 2023. If we have missed anything, let us know in the comments below.