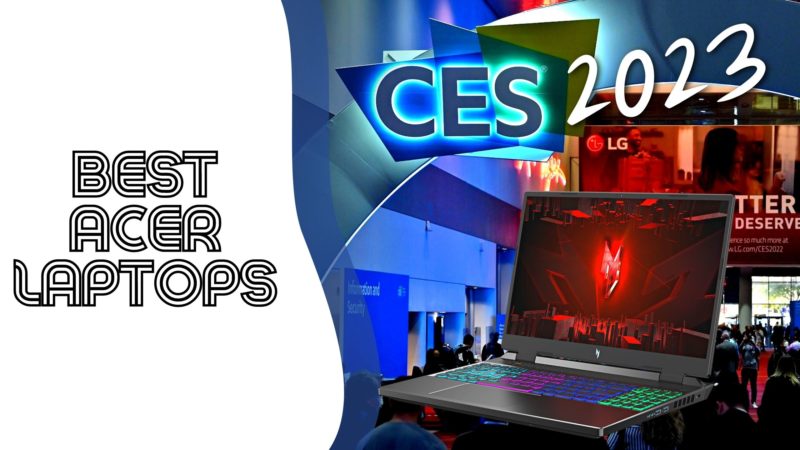 CES 2023 is here. And along with all the other brands like ASUS, Dell, MSI, Lenovo, Razer etc., Acer also launched its brand new lineup of Laptops. These Laptops feature the latest Generation and current generation specifications paired with many of the new features that the included RTX 4000 Series Graphics Card bought. The displays, internal storage, keyboard, touchpad, and design have all been upgraded to keep up with the 2023 standards.

Acer bought a new lineup of laptops to replace the older generation laptops. The range would include their Swift Business/Content Creation Series Notebooks, Nitro/Helios Gaming Notebooks or Aspire Series, which happens to be for customers using their laptops for regular tasks.

So we have listed down all these laptops, so without further delay, let’s check out all the Acer Laptops released at CES 2023.

These are the Acer Laptops that were released at CES 2023.

These are the new lineup of Acer Swift Laptops released at CES 2023.

The Swift Go Laptop comes in both 14in and 16-inch versions with an aspect ratio of 16:10. It has a resolution of 3200×2000, and it is a touch screen OLED Panel with HDR Support and support for technologies like True Black 500.

The Acer Swift 14 is a step up from the Swift Go Laptop and is placed under their premium range of Laptops. It comes in 1920×1200 or 2560×1600 resolution panels with Antimicrobial Gorilla Glass Protection.

The Acer Swift 14 will be powered with the latest Intel 13th Generation Processors (H Series) with improved cooling facilities. It is equipped with dual speakers, features a QHD 1440p Webcam, has a full range of Ports available for your external devices, and comes for $1299.

The Acer Swift X is their flagship Swift Laptop. Although it feels and looks like a normal thin and lightweight notebook, it is filled with features making it the most powerful among all three of the other Swift Laptops.

This laptop features a 2880×1800 OLED 120Hz Display with TrueBlack HDR 500 Certifications. It also features a 13th Gen Intel Core i7 H Series processor and is powered with an RTX 4050 graphics card. along with RTX Studio Driver support with 29% more battery life. It also has excellent cooling potential and comes with a 1440p QHD Webcam. The price of this laptop is $1199. If you are looking for a great video editing laptop, then the Acer Swift X is your way.

These are the Acer Aspire notebooks released at CES 2023.

The Acer Aspire 3 is an entry-level laptop with Intel Core i3 Processor. It has a full HD Display with the new BlueLightSheild Technology and comes equipped with the latest Ports like Type C and HDMI 2.1. It also has premium Wi-Fi 6E technology built in.

The Acer Aspire 5 is a bigger brother of the Aspire 3 and features a 13th Gen Intel Core Processor paired with an RTX 2050 Graphics Card. It also has 32GB DDR4 RAM and a 1TB NVMe M.2 SSD. The 15-inch version comes with a 16:9 aspect ratio, while the 14-inch comes with a 16:10 aspect ratio and uses the Temporal Noise Reduction Technology and Acer Purified Voice.

Acer released two different lineups for their gaming laptops. The cheaper ones will be the Nitro Series, while the costly ones will be known as the Helios Series.

The all-new Acer Nitro 16 is a Gaming laptop that will feature a 165Hz Refresh rate and the RTX 40 Series Graphics Card and will be powered with the Intel 13th Generation H Series Processors. It will come with all the gaming-specific features with excellent cooling potential. The price of the Acer Nitro 16 will have a starting range from $1199.

The Nitro 17 is the 17-inch version and a step up from the Acer Nitro 16. It features both Full HD and QHD resolution display. These laptops are powered with the RTX 4000 Series Graphics card and have support for up to 32GB DDR5 RAM along with PCIe Gen4 Slots. The Acer Nitro also has a starting price of $1199.

Both the new Helios from Acer features a 16-inch and an 18-inch variant and comes in either the 13th Gen Intel Core i7 or the Core i9 Processors. The Laptops are paired with an RTX 4000 Series Graphics Card and have 32GB RAM. It has 2TB of Storage and a mini LED Backlight keyboard, which provides excellent halo-like lighting effects.

The cooling structure of the Acer Helios Laptops is designed uniquely and features a spare cowl for the laptop’s rear deck, which you use to customize and colour the way you like it. Acer will be allowing it without voiding the warranty. It will come with the flagship specifications, and Predator Helios is your way to go if you wanted the best Acer gaming laptop in 2022. The starting price of the Helios 16 will be around $6100, while the price of the Helios 18 will be $170.

These are the Google Chrome notebooks from Acer featuring the last generation 12th Generation processors paired with 16GB RAM. These Chromebox get attached to the back of a monitor using a VESA mount. It is an all-in-one solution for offices or schools and features Wireless Wi-Fi 6E Connectivity. It can support up to four external display outputs.

Acer also added the Add-in 24-inch monitor, which is made to work with the Chromebox CX15 monitor seamlessly. It hosts a 5MP webcam and features a 115-degree viewing angle. The Monitor comes with inbuilt speakers and mics. The starting price of the Chromebox CX15 is $289, while the Monitor will be priced at $609.

So this was all about the new Acer laptops at CES 2023. These laptops are great and certainly best for multitasking, gaming, business, or even your daily needs. However, if you think we missed anything, let us know in the comments below.