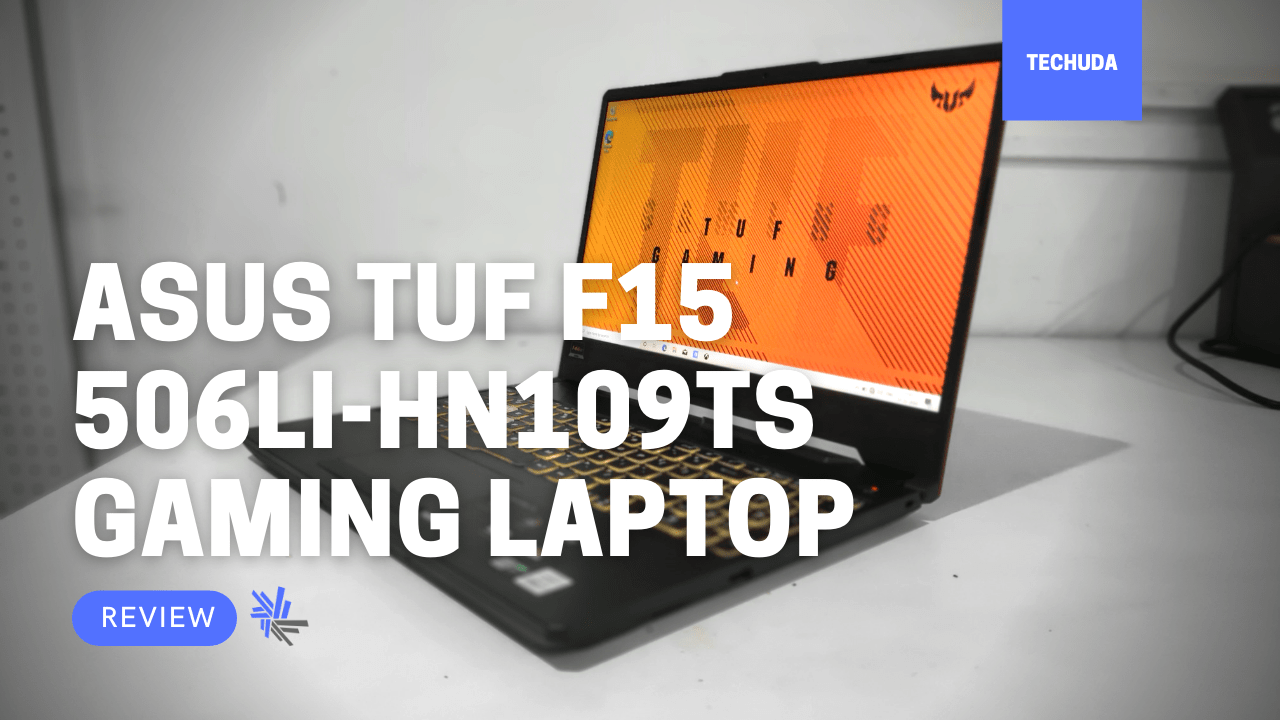 The ASUS TUF F15 506LI-HN109TS Gaming Laptop brings a lot of horsepower to the table with the Intel 10th Gen Core i7 Octa Core Processor along with the Nvidia Geforce GTX 1650Ti 4GB Graphics Card but keeping the price surprisingly low for such a powerful device. Are we missing out on something? Let’s find out then!

The Taiwanese Laptop Manufacturer brand ASUS recently sent over one of their ASUS TUF F15 F506LI-HN109TS Gaming Laptop for us to review and check out. Asus has always been one of the leaders in both laptop and desktop component departments, and they are especially known for their Republic Of Gamers range of devices and peripherals.

The TUF Series from ASUS has always been a cheaper alternative to the higher-end ROG Series of Notebooks. But with the recent technological advancements and research and development from ASUS, the TUF series did improve a lot over several areas while keeping the price as minimum as possible. The competition is high with MSI’s GF65 10SDR models, which offer a better Graphics card at a similar price but at the cost of a weaker i7 Hexa Core CPU.

The Asus TUF Gaming F15 Laptop is already available worldwide with various retailers and online partners like Amazon. The laptop is priced at around $1100 as we are writing this article. For the price, it’s a must-buy. ASUS TUF Series has always been a popular choice for gamers and content creators who want to own a Performance-oriented laptop but on a low budget.

The Asus TUF F15 506LI is made entirely out of plastic. The whole body, including the lid, the bottom, the laptop deck, and the hinge, is wrapped up entirely with black matte plastic. However, ASUS does claim to use Military Grade components on their TUF15 Gaming Laptops for better durability. The lid has a decent amount of flex with extremely thin bezels on three sides of the display, giving a more widescreen experience for the users.

The black reflective ASUS TUF logo is present on the top of the lid. There is also a reflective ASUS branding on the bottom frame of the display. ASUS also shifted all the power and Battery indicators at the top back of the laptop with the TUF Gaming branding just beside it. Overall the design is pretty good for the price. It is not like the ROG Series of Laptops in design and build quality, but this laptop will be durable if handled with care.

This laptop sports a 15.6 inch Full HD IPS Display with a resolution of 1920x1080p. The laptop also features a very sharp display of 141ppi. Images, texts, and videos would look excellent on this display. With a brightness of 250nits, you can use the laptop under direct light as the display is Anti Glare coated. The Color Gamut of this display would be around 62.5% which is not that great, with an sRGB of 47.1% and 45% NTSC. But it does sport a 144Hz Display for gamers. ASUS targeted this laptop mainly for Gamers with Gaming specific Display features. We won’t be recommending this laptop if you are primarily into video editing or photo editing. Yes, it does have the horsepower to run all the major tasks, but the display and the color accuracy can take away the interest of the creators at large.

As we already mentioned before, ASUS provides the best value for money for their TUF series of Gaming Laptops. The ASUS TUF F15 506LI features a full-sized gaming keyboard with transparent WASD keys for gamers. The chiclet RGB backlit keys have around 1.3mm travel for better tactile feedback. The presence of Zone RGB on the Keyboard gives the players complete control over the keyboard’s lighting and is fully compatible with ASUS Aura Sync software. The RGB lighting can be channeled to other ASUS Aura Sync supported peripherals as well.

The trackpad is also made out of plastic with two dedicated left and right buttons. The surface is smooth, and it responds well to our various gestures like pinch to zoom, double click to drag, etc. There is nothing new or unique with the ASUS TUF F15 506LI trackpad.

On the right, we have one USB 2.0 Slot and the Kennington lock for the connectivity side of things. It is good to see that ASUS TUF Gaming laptops still support the legacy USB ports and include them in their modern laptops. Meanwhile, on the left, we get to see a plethora of ports and jacks. They get to see that Charger port, one RJ45 jack, one HDMI port, two USB 3.0 ports, one Type C USB port, and one headphone/microphone combo jack.

Unlike the ROG Gaming Laptops, the ASUS TUF F15 506LI sports a 720p Webcam for online classes, video conferencing, etc. It can also shoot pictures and videos at a resolution of 1280×720. The quality is decent, and the users shouldn’t be having any issues using it.

ASUS featured a Li-ion 48W/hr 3 cell battery, which would last as long as six hours with web browsing and over 4 hours with video playback. Gaming laptops are known for their power-hungry feature, which notoriously feeds up all the battery juice. Plus, you also need to plug your laptop in if you want to utilize the full potential of the processor and the GPU. They provide a 150W charger to charge the ASUS TUF F15 506LI Gaming Laptop.

The dual speakers on the ASUS TUF Gaming are good and loud. With the implementation of DTS technology, you can expect immersive 3D audio when using Microsoft spatial sound within Windows, rendering clear, rich, and believable audio for the most engaging listening experience on speakers and headphones and giving you a competitive edge Gaming as well.

The ASUS TUF F15 506LI HN109TS Gaming laptop is powered by Intel Core i7 10870H Octa Core 10th Gen Processor, paired with an Nvidia GTX 1650Ti Graphics Card with 8GB DDR4 Memory and 512GB NVMe Storage. This Comet Lake Processor runs around a frequency of 2.2Ghz to 5Ghz on a single core with the Intel Turbo Boost technology. There are a total of 8 cores and 16 threads on this CPU. The i7 10870H is at par with the AMD Ryzen 7 4800H, which offers a similar level of performance.

The Nvidia GTX 1650Ti is a midrange GPU with 4GB of Graphics Memory. With the specs present on the Asus TUF F15 506LI, the laptop can handle pretty much run anything you throw at it. The RAM is upgradable up to 32GB.

The Asus F15 Gaming Laptop’s thermals are taken care of by two fans and two massive heat pipes, which carry away the heat from the internals through the huge radiators present at the back of the laptop.

Within 15 minutes of full load, the processor reaches more than 90 degrees and stays there, while in real-life Gaming situations the temperature of the Nvidia GTX 1650Ti GPU should not cross 70 degrees celsius. As we saw in competitive brands like MSI, where we get to see a much more advanced and robust thermal solution with more heat pipes, ASUS could have installed a better cooling system to avoid thermal throttling. The radiators present at the back of the laptop provide an ample amount of airflow to pass through, but the bottom intake area is more or less 80 percent blocked.

The ASUS TUF F15 506LI Gaming laptop would be an excellent choice of laptop for users who are specifically looking into gaming with an excellent processor and prefer Intel over AMD. The 144Hz display, the Octa-Core Intel CPU with the Nvidia GTX 1650Ti GPU, is enough to run all the latest game titles at high to ultra settings at 1080p. It is not a content creation laptop, but you can do your video editing and rendering tasks on this laptop. It would have been a complete gaming package if ASUS had gone with 16GB RAM instead of 8GB. However, the ASUS TUF F15 506LI is an outstanding laptop that would serve you for years to come!