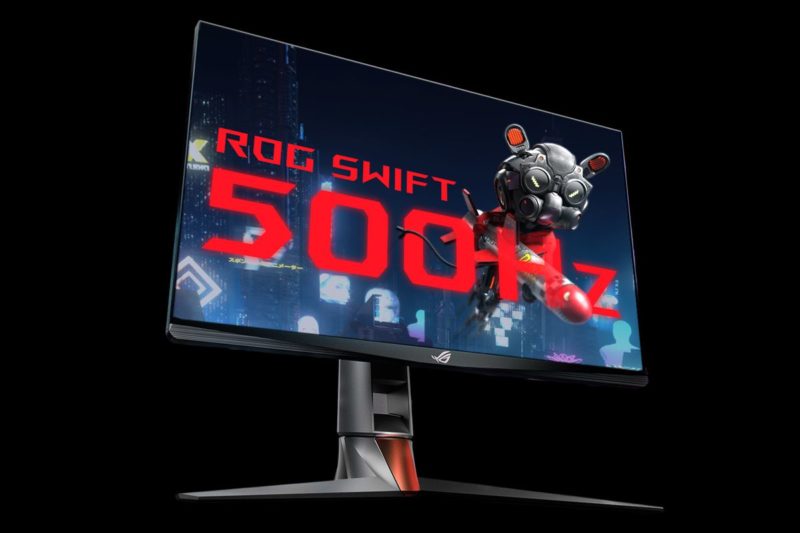 Asus 500Hz Gaming Monitor has been recently revealed in the Nvidia Computex 2022 event, which has crossed the boundary of 390Hz refresh rate.

A few months ago, Benq revealed their 500Hz monitor, which is still under development. In May 2022, at the Computex 2022 event, Asus announced their new monitor that can provide up to 500Hz refresh rate, making it the fastest esports display. Asus has directly collaborated with Nvidia and introduced the new G-Sync 500Hz gaming monitor from the ROG Swift Family. So this time we can expect something new from them.

The Asus ROG Swift Gaming monitor will provide all the necessary features for multiplayer competitive esports games. Asus has mainly focused on delivering an ultra-smooth gaming experience with ultra-low latency to its users. This monitor will be 8x times faster than a Standard 60Hz display monitor.

In 2012, ASUS released the world’s first-ever 144Hz monitor, and we’ve been hungry for higher refresh rate monitors ever since. From the first 240Hz NVIDIA G-SYNC display Asus released in 2017 to the first 360Hz display in 2020, ROG Family is committed to pushing competitive gaming to new heights. Now, Asus is ecstatic to announce that they have done it again. The Asus ROG introduces the groundbreaking monitor that refreshes 500 times per second.

Besides, In competitive gaming with intense firefights, every single millisecond counts. With super low response times and unprecedented improvements in input lag, the ROG Swift 500Hz is the new benchmark in Esports. Gamers can detect their enemy faster so that they can aim and fire on them before their enemy does.

This ROG Swift monitor has been designed with the latest TN (E-TN) technology along with Vibrance. This provides 60% better response times than the standard TN monitors. It also comes with built-in Nvidia technologies like the Reflex Analyzer and G-Sync. This will let gamers tweak their settings to achieve the lowest possible input lag without stuttering or tearing.

Although the previous product of, the Asus 360Hz Gaming Monitor, did not perform well as we expected. It claimed that it provides a boost of 390Hz, but in reality, it couldn’t even push 360Hz with a 1ms response time. When we tried setting monitor response time at 1ms, we noticed a lot of screen tearing visible and very distracting during competitive gaming. We hope that Asus will look after this problem, and this ROG Monitor will be capable enough to provide a 500Hz refresh rate and a 1ms response time.