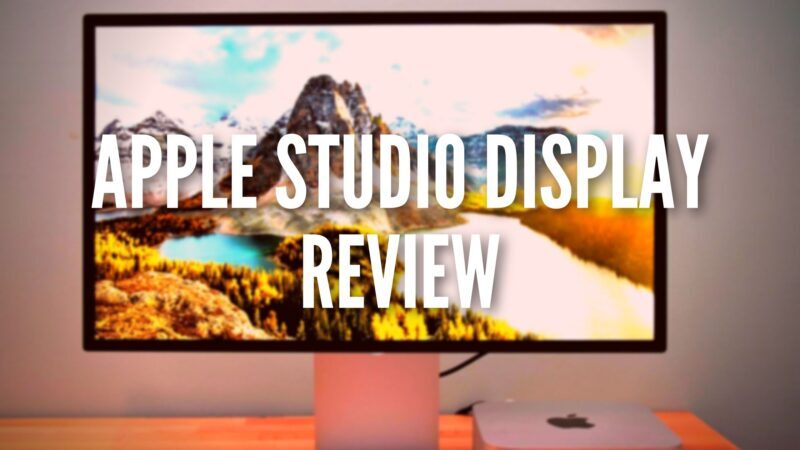 The era of new display tech is here, where the Display gets its A13 Bionic chip enabling innovative Studio Display features like Centre Stage, Spatial Audio, and “Hey Siri”, which the top tier Apple display doesn’t have.

The new Studio Display released at the Apple Event has come up to the stores and is ready to use for the creators and the people who like premium displays and the Apple logo. The Display indeed comes with some new quirks and exciting features and will be fun to use.

An Apple Studio display price is $1599, a standard, and the Nano textured finish comes at $1899. But at this price point, the users were expecting a better display in 2022. Backlit LCDs are rare to see, and the stand that comes with them is tilt-adjustable, but if you want to buy a height and tilt-adjustable frame, then that is another $400. So let’s get started with the rest of the review, and the rest, you can judge yourself if the product is for you or not.

The 27-inch monitor is pretty smaller than the Pro Display XDR and its resolution. At 5,120 x 2,880 pixels with a pixel density of 218ppi, it has the exact 5K resolution as the departed iMac and the size.

Its brightness is also closer to the 27-inch iMac at 600 nits than the Pro Display XDR at 1,600-nit. That’s partly from LED backlighting rather than mini-LED, which is why there is a price difference between the Pro XDR display and the new Studio display.

You still get Apple’s traditional Wide Color (P3) support for 1 billion colours and True Tone, which aligns with many other Apple-produced monitors in its products.

Though not as bright or as high-resolution as the Pro Display XDR, it does aim to offer features aimed at content creators. Many reference modes are available, including Apple Display, HDTV Video, NTSC, PAL, SECAM, Digital Cinema, Design and Print, Photography, and Internet and Web sRGB.

Another thing that Apple didn’t include was a 120Hz refresh rate which is still at 60Hz, and the and 2022, the Display is coming out with unbelievable refresh rates. Still, Apple being Apple, has there own business model, and this Display didn’t get a lot of praise because of its price and the old technologies it uses.

This is the last 2nd last product of apple to lose its headphone jack permanently, and the last will be the Macbook if it ever does. It doesn’t come with the headphone jack of the 24-inch iMac. Apple did include a high-fidelity six-speaker system, complete with force-cancelling woofers and Wide stereo sound support for a better music experience, movie, or other daily things it has will be used for.

The speakers are also compatible with Spatial Audio and Dolby Atmos, making it an attractive option and don’t have to for another speaker system as the Macbook also comes with excellent speakers.

The Studio Display can also record audio using a trio of “studio-quality” microphones with a high signal-to-noise ratio and directional beamforming. These microphones are installed because Apple customers for a product like this will be content creators, and they need a high-performing mic if they want a tune or something or maybe a jam; it can also help people who go live streams and do a lot of meetings and stuff.

The screen has support for “Hey Siri” when connected to a Mac, which the directionality of the mic array should assist.

Like other Apple displays, the company has squeezed a camera into the top of the screen. In this instance, it’s a 12-megapixel Ultra-Wide camera with a 122-degree field of view and an f/2.4 aperture.

The camera includes Center Stage support, Apple’s feature for video conferencing where it reframes the camera depending on the number of subjects it sees.

Initial reports indicate the camera isn’t up to the standards. Still, since the Studio Display runs on iOS 15.4, it stands a chance of gaining a software update to improve the picture quality.

It may come with an A13 Bionic chip, but it isn’t a 27inch iPad. It’s a display with a few extra spices. That’s all because it can’t run apps or such.

If you face any Webcam related issues, refer to this article!

Last year’s iMac has the same look as the new Studio Display. iMac had colour choices but Studio Display doesn’t because it’s for professional use, and the silver looks good and fits in well with other Apple family members. With its stylish design, straight edges, and narrow bezels look sophisticated.

The power cable is permanent in the Studio display, unlike the iMac, which comes with a magnetic Magsafe cable. When tripped, the line comes out without harming the Display, but the Studio display has a permanent one which is a downside. So, don’t try to pull it too hard, or else your new Display will need to get repaired.

As we mentioned earlier, we had the standard screen without nano-texture, and especially when it’s off, you can see just how reflective the Display is. Along the top of the screen are vents for keeping the Studio Display cool, and on the back are the ports.

Monitors should have ports that support day-to-day ports such as HDMI or Display dock, but the Studio display ships with 4 USB C ports: a Thunderbolt port with power delivery and a Macbook 14inch can be fast-charged with this THunderlot port.

If you’re planning on plugging in a MacBook or a Mac, this won’t be an issue, and a nice feature is that the Studio Display will also charge your device while it’s plugged in, saving you from having an additional cable cluttering up your desk.

So this was all about Apple Studio Display Review. Click here to read the full review of the Apple Mac Studio!