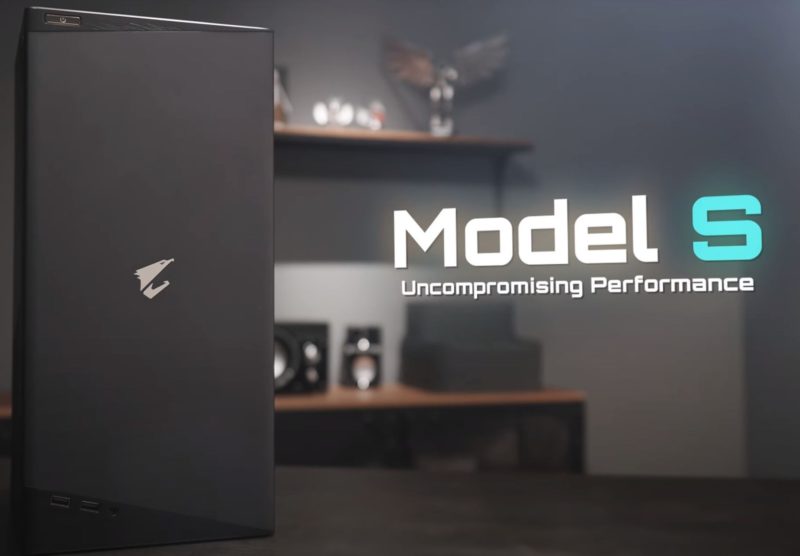 The all-new Aorus Model S from Gigabyte is a prebuilt Gaming Desktop that features Intel Core-i7 12th Gen CPU and an Nvidia RTX 3070 GPU in a compact form factor!

While some gamers look for a Gaming PC with different assembled parts, some prefer a prebuilt gaming system. These compact gaming PCs come within a small form factor with Mini-Atx motherboards. And in 2022, Gigabyte launched a compact gaming PC known as the AORUS Model S. The form factor is similar to Corsair One or MSI Aegis Ti5.

Aorus Model S comes with both AMD Ryzen and Intel Processor and an Nvidia RTX 3070 GPU. The Ryzen Version of the Gigabyte Aorus Model S has not been released yet, so today will use the Intel version of this Prebuilt gaming PC. As soon as we get the AMD Version of this model, we will share the benchmarks on this article, so make sure you bookmark it.

The Aorus Model S Gaming PC is currently available globally with various offline Retailers and online retailers like Amazon. The Aorus Model S Intel variant is priced at around $2,299.99. But the price may vary from region to region, and you might also pay $12.99 as a shipping charge.

This Gigabyte Aorus PC design is similar to the latest Xbox X console design. It has been manufactured with premium quality aluminium, and the main chassis body feels rugged and durable. Despite having a 14L volume chassis capacity, Gigabyte managed to squeeze in the latest Nvidia 3070 founder edition GPU.

This compact system has a great cooling technology. The air intake vents are big enough to maintain positive airflow within the chassis. Also, it has a beautiful RGB Aorus Icon in front of it. The front side ports are placed in the left below portion at an angle of 45 degrees, while only the power button is placed at the top left side of this mini prebuilt Gaming pc.

This Mini-ITX Gaming PC comes with a Gigabyte Z690 m-itx motherboard. This motherboard is based on the latest DDR5 platform capable of handling the Intel Alder lake Processor and Nvidia Powerful RTX GPU.

The I/O panel has 12 USB ports, of which ten ports are on the back, and the rest of the two are placed on the front. Also, this Mini form factor motherboard comes with a LAN Port of Intel 2.5GbE RJ-45, which supports 2.5G/1G/100M. It has Intel WiFi 6E 802.11ax and the fastest Bluetooth v5.1 model for wireless connectivity.

We did some benchmark tests with this Aorus Model S Gaming PC, and here are the test results.

Gigabyte has designed its compact gaming PC with some of the most impressive cooling architecture. The company has managed to fit in a large heat sink placed at the centre position and comes with a separate copper baseplate directly connected to heat pipes. The heat pipes carry away the excessive heat from the CPU and keep the entire system cool. Also, this Aorus mini Gaming System has a three-way air intake and one air output system. The average temperature of this system remains at 38 degrees Celcius, even under heavy load mode.

This vertical cooling system has two giant fans at the top and bottom positions. Both fans keep the system temperatures under control. Also, both fan remains under 40dB noise level under heavy load.

Can I upgrade my Aorus Model S Compact Gaming PC?

Unfortunately, this model does not come with any upgrade option.

How much warranty does Gigabyte provide for the Aorus Model S Compact Gaming System?

This model comes with two years of warranty. Besides, Gigabyte customer support is excellent when it comes to troubleshooting.